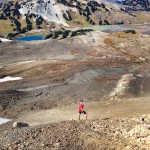 The Rubble Creek Classic trail race is one of the best in BC, traversing from Helm Creek near Function Junction in Whistler, over the volcanic cinder flats and Taylor Meadows below Black Tusk, and then down Rubble Creek near Squamish. It is one of the most accessible areas in Garibaldi Park (and therefore very popular) and also presents great trails, peaks for scrambling, and some amazing views of the Park, Tantalus Range, and Whistler (so therefore even more popular). 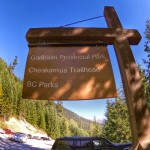 Escape Route has been hosting the race for many years, the most recent event being in 2012, as the 2013 race was cancelled due to deep snow on course. This year though, despite the rain in the preceding week, the weather was splitter with good temps and not a cloud in the sky. I was excited that it was cold enough I had to wear my puffy jacket for the first time this season! 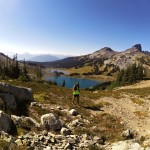 Josh at the high point of the Rubble Creek race course with Black Tusk in the background.

Andrea and I did some pre-race rock climbing on Saturday. We had dinner in Squamish and then Kate came over to crash for the night. Sunday morning, the three of us loaded up with our carpool buddies Cristina and Mayo and then headed to the start line at Chekamus Lake. Will had devised a complicated car shuttle plan that was indecipherable by any of us but we were lucky to have Andrea who was willing to drop us off at the start and then meet us at the finish.

The start was chilly and racers milled around as usual, waiting for the race announcements. We did a quick warmup and then it was time to go. We started at a pretty civilized pace for the flat kilometre and a half that you run to get to the bridge over the Chekamus River. A runner I didn’t recognize, Justin, pushed the place until we hit the climb, and then I took over. Silas fell off the pace early on (but he put in a hard effort last week at Sky Pilot) but Justin seemed to be keeping up just fine. He would make up time on me, especially on the flatter sections of the climb where he seemed to be able to turn his legs over just a little bit faster. 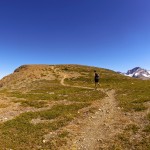 About a third of the way up, he took the lead again and we settled into a comfortable pace and even chatted a bit. He mentioned just coming back from World Mountain Running Championships in Italy with the Canadian National Team so I felt a bit better that he was not just some random guy, but pretty legit. As we broke out into the alpine, I took the lead again and tried to push away on the final climbs, but he hung on pretty tight and again made up any lost ground on the flats. We bombed through the creek crossing and were pleasantly surprised that it was only ankle to shin deep and not to the waist.

At the top of the course, we started the descent and pretty quickly he passed me for the last time. I hung with him on the lower angle trails through the meadows but as we reached the Taylor Meadow Campground, he pulled away and out of sight. I pushed hard on the downhills but just couldn’t get my legs going that fast though they felt surprisingly good! Right after starting the main descent, I took a big, superman wipeout. Luckily there were no tourists at that point to witness it but I hit pretty hard and my legs momentarily cramped when I got up. I got back on track quickly but likely ran a bit more conservatively after that.

I rolled into the finish several minutes after Justin and a few before Silas. I was anticipating feeling totally wrecked after but was doing alright. I managed to get under the two hour mark and improve on my 2012 time but still felt like I didn’t quite leave it all out there on the course. Looking at HR data from the data, I started strong on the steeper section of the climb but pretty quickly eased back to a sub-threshold pace when I should have been putting on the gas a bit more. I think I got a bit complacent when Justin took over on the climb. That may have been my chance to make up some time and I didn’t take it. That being said though, I felt during the race like I was pushing at a good pace. It could be that training during the week led to my legs feeling a bit heavier then if they were fresh. In reality though, running fast and especially descending is not my strong point. Justin was clearly the stronger runner and it was great to be able to chase him for a few minutes on the descent. Congrats on the well run race!

James Retty (owner of Escape Route and general good guy) puts on a pretty cool event. Obviously the scenery is awesome and the trail is nice and all that but it is a good community event. A true mountain run feeling, it goes into the alpine and is entirely self supported. With nothing but a map and park signs marking the route, you are responsible for getting yourself to the finish without miles of pink streamer tape. With a field limited to 80 runners, it has a small race vibe that makes for a good group. It was awesome to see a bunch of my coaching clients line up at the start and then charge strong into the finish!

Nutrition was a 250ml Hydrapak Soft Flask filled with 1:3 Hammer Raspberry Gel and Water. This was likely even too much as it was pretty chilly and we were only in the sun a short time. I had cereal for breakfast but it may have been a little too close to the start as I definitely felt it when I pushed harder.

I used my Dynafit Feline shoes and experimented with Outdoor Research trail running gaiters to keep the pebbles and rocks out of my shoes. They were awesome, worked perfectly, and I will definitely continue to use them in races and on scrambles where we encounter gravel. 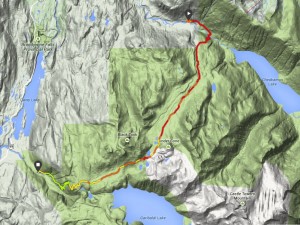