My 2013 recap will start with training. I am pretty happy with my overall numbers. At just shy of 700 hours and over 204 km (.6 million ft.) of vertical ascent, I climbed nearly two thirds of the way to the International Space Station and well above the stratosphere. These numbers are again a big jump from 2012 (500 hrs and 166 km vert).

2013 was actually a pretty awesome year. Looking back though some of my photos, I realized that a lot happened and it was almost all great! I spent the beginning of 2013 skimo racing in Wyoming on a road trip with Brad S and Thierry W. After that trip, I took several visits to the rockies for races (and the Hypoxia conference). The race season was extremely successful. With the absence of some notable names from the Canadian circuit, the rest of us were able to battle it out for top spots. I managed to stay in the top three in every race and cinch 2nd place overall on the Canadian Cup. It will be really interesting to see how things pan out this year with a (likely) stronger field contending for spots. 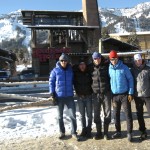 The Canadian contingent at U.S. Nationals in front of the Jackson Hole Gondola. 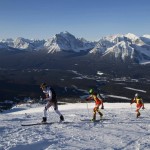 Racing with Brad and Peter at the Lake Louise Ken Jones Classic. 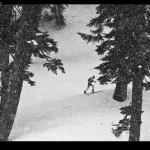 As spring rolled around, Nick and I got out for a few days of (as he puts it) “efficient ski touring”. We ticked off a goal that I had been obsessing about for a while – a new record on the Spearhead Traverse from Blackcomb to Whistler Mountain. Stano joined us for a trip down to break the Rainier speed record (short lived: broken again 16 days later!). 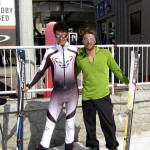 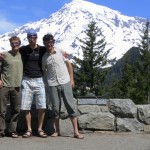 Couldn’t have asked for a better trip to Rainier with two of my best friends!

Not sure who took this pic but one of the few of Nick and I on our short break at the summit of Mt. Rainier.

The big snowpack lasted well into the summer but when it melted and the alpine was revealed, we managed some pretty awesome runs and scrambles up high. One of my absolute favorites was a solo trip to Castle Towers in Garibaldi Park. The route starts on a well maintained trail and then turns off onto a huge variety of terrain: scree, glacier, heather slopes, and boulder fields; culminating in an exposed and loose scramble to the summit block with incredible views of the park and as far south as Mt. Baker. 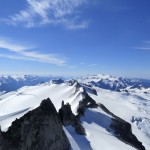 The view of Garibaldi Park from Castle Towers Summit 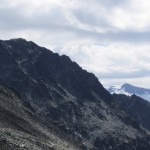 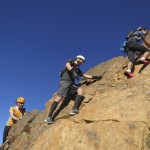 Not only did I spend quite a bit of time running in the alpine, I also spent a lot of time running the trails in Squamish. Squamish has incredible trails and tons of them. I signed up for the 50k event at the Squamish 50 and did my best to prepare for it. I hoped for a home course advantage but I think knowing the course only made me dread what was coming next! I was really luck to have Alexis come to the race and hang out at the aid stations to support me. It was really fun to be able to do several races on the trails that start just outside my backdoor. 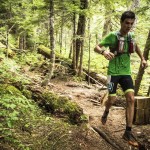 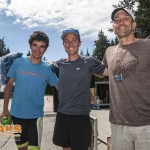 I only managed to race one 5-peaks race this year but it was fun to chase Adam! 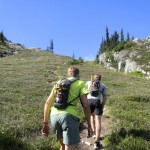 Brad and Nick running on nice dirt in Railroad Pass.

Despite all the running, I actually did manage to get in some rock climbing! Andrea and I took a quick trip to Smith Rock in October. Paul was too busy to join us but we still managed some fun multi-pitch sport routes. Paul did come visit Squamish to get his summer granite fix and we got out for a few good days on the chief. Nick dragged me up a few routes that were way above my head.  It is impressive to climb with and watch an expert but sometimes I was terrified… 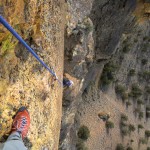 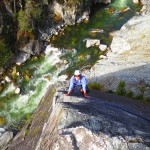 Aside from training and racing, I managed quite a few days of amazing ski touring, lift skiing, and steep descents. Bruno and I started an attempt on the McBride Traverse but bailed due to slow conditions. We opted instead to do the Spearhead in reverse (starting up signing pass from the village) and tick a few fun lines along the way. Despite the midnight start and failure of plan A, it was an amazing day with beautiful views and weather. Paul and I nabbed a (near complete) descent of the Birkenstock Couloir in December – one of the big items on my tick list. 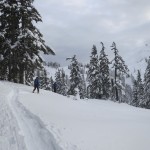 Ski touring with my Dad (my biggest sponsor) and Alexis at Mt. Baker. Can’t beat a relaxed day with a hot tub at the end! 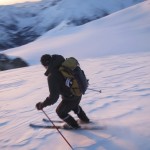 Bruno at 4am on the Spearhead Traverse. 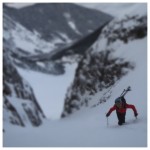 Booting up the Birkenstock Couloir.

I really appreciate all the partners I skied, ran, and climbed with this year. I also got a lot of support from some great sponsors including Dynafit, Colltex and Challenge by Choice. Hammer Nutrition will be added to this list for 2014. I can’t wait to start competing in 2014 to see last year’s work pay off.

In 2014 I am looking forward to quite a few trips South and West for skimo races. I am already starting to thing about the running season and am really excited about some of the races that will be happening in our backyard! Hopefully the gondola will give us access to interesting new places to run, ski, and climb. I am also looking forward to a little less running and a bit more rock climbing in Squamish. Finally – my Phd project is coming together well and I will soon be starting data collection.