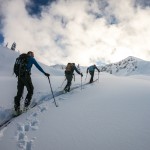 The 2018 skimo season was a bit of a different one for me compared to previous years. It was my first of the last four that I didn’t end up travelling to Europe for World Cups. This wasn’t unintentional though and I was looking forward to getting the chance to spend a full winter in BC.

Our winter started reasonably early with a few ski days in October though not quite as strong as the last two years. By mid-November we were reliably hiking up to snow and by December, the ski hill was open and we were also skiing up at the Sea to Sky Gondola.

I got my first taste of racing in December when I headed down to Colorado for the Eldora National Cup weekend. At 3000m, the first night’s vertical was a shock to my system and I had a hard time getting things going. Luckily by the next morning, I was feeling a bit better and managed to chase John Gaston around the course for 2nd place. The rest of the trip was a whirlwind of visiting friends in Boulder and doing some work with the guys at Ultimate Direction. 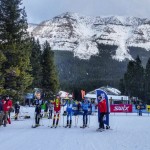 After the holidays, I headed out to the Canadian Rockies to race the always fun Castle Mountain Canadian Cup event. Mike Foote travelled up from Montana to keep things competitive and I managed to win both the sprint and individual. A few weeks later, it was off to Nelson for the ROAM Randonne Rally, one of my favourite events of the calendar. It always snows a ton for the Nelson race and this year was no exception. Peter Knight and I were breaking trail the entire race but I managed to hold him off on the descents.

I took a little hiatus from racing mid-season to focus on organizing my own race, the very first, Squamish Ski to Sky Race. It was a ton of work but I had a lot of help from the local crew as well as all my sponsors. We sold out the event with 85 participants and showed that the Sea to Sky area is itching to have some skimo racing!

With some significant pent-up energy to burn after so much organizing, I snuck away for a morning to race around the Garibaldi Neve. This is a local traverse test-piece that Nick and I have been trading back and for the FKT for. I had good, fast conditions on almost the entire traverse and managed to cut down the time pretty significantly and set a new FKT of just under four hours.

I wrapped up the race season by road tripping back out to the Rockies, this time with Nick. First we stopped at Marmot Basin for their new race where Nick and I again broke a bunch of trail after which Nick out sprinted me to the line. We spent the next week climbing ice in the Rockies (because let’s face it, the skiing just doesn’t compare to the Coast). The following weekend, we lined up for a vertical, sprint, and individual races at the Ken Jones Classic in Lake Louise which also served as the North American Championships. There was a decent contingent of Americans there to boost the competition and I managed to finish 2nd, 2nd, and 1st in the respective events. 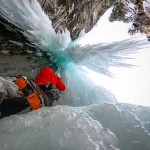 Nick heading off from the belay on Shreddie.

Overall, the season was significantly mellower in terms of racing compared to the last few. Only 10 race starts instead of 20-30. One of the goals of my season was to improve my ice and alpine climbing abilities. This actually was a fairly resounding success. While my racing and ski numbers were a little lower this year, I got in more than 25 days of ice climbing both on the Coast and in the Rockies. I’m feeling significantly more competent leading steep ice and am looking forward to continue to push my mixed climbing.

As always, the season would not have been possible without a ton of support from friends, family and sponsors. Especially thanks to those that offered their spare bedrooms including Kylee, Michelle, Meghan, The Kadlecs, Joel & Gavin, Moni & JM, and Adam.

Luckily the ski season isn’t done here in the PNW and we’re just getting into the really fun stuff with spring weather finally arriving. The last few weeks, I’ve gotten to tick off a few awesome lines from my list but I’ll post a spring recap later on. Looking forward, I have a few more goals this season to take care of before the snow melts. Summer is approaching quickly though so I’ve been starting to run and rock climb a bit to prepare to get in shape for that. Some summer goals include getting back up into the Tantalus Range for some unfinished business above Lake Lovely Water, exploring new portions of the Chilcotins with Andrea on a fast packing trip, and some longer runs further afield. I’d also like to get out to a few races though will probably wait until I have some running milage under my belt!

A quick climbing break after the Castle Mountain races.

So much powder skiing this season!

Opening the track for the first ever Squamish Skimo Race!

Nick and I racing hard against each other at the North American Champs.