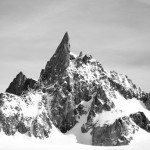 In one sense, I have been quite lucky not to have serious incidents in the mountains resulting in injury to myself or anyone else in my party. I’ve never had a major ‘epic’ or been benighted. I say lucky because while I do consider myself a pretty safe climber (mostly because I am usually quite scared), I have had my share of close calls just like most other people I know. On the other hand, I’ve been unlucky to find myself on the scene of several major accidents now. As a beginner climber, I never would have expected that my time in the mountains would include encountering fatalities.

Paul arrived in Chamonix in mid-April and right away we headed out to climb the Goulotte Chere – an easy ice-route right off the Midi cablecar. We had a blast climbing the route, I led the whole thing and Paul quickly learned how to ice-climb (it was his first time!). We were stoked and rappelled the route early in the day with plans to do some steep skiing.

We scooted over the bergshrund back into the sun where our skis were waiting and started changing into our ski boots. A second or two later, I looked up again and saw two people in the snow a few hundred meters further along the ‘shrund below the next route. It only took a second to realize that something wasn’t right. There had been no-one there a few seconds earlier and they weren’t moving and lay about 20 meters away from each other with the rope between them. I grabbed Paul’s shoulder and said: ‘do you think that is what it looks like…?’. I ran towards one climber while Paul headed for the second. Right away I could see that the first climber was dead. His skin was blue and his face and neck mangled and bruised. He didn’t have a pulse that I could find and Paul yelled that the second was still alive but he needed help so I left him to focus on the injured climber. 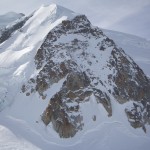 Mont Blanc du Tacul with the prominent Triangle du Tacul facing the Aig d Midi. The Contamine-Mazaud travel up the centre couloir/snowfield. The Goulotte Chere is just out of view on the right.

The climbers appeared to have been climbing roped together, but not using protection (simul-soloing) when they fell nearly the full length of the Contamine-Mazeud route on the Triangle du Tacul. We had seen them mid-route as we skied towards the Chere earlier that morning.

The second climber was unresponsive when Paul arrived but a yell and a slap brought him to partial consciousness though he was clearly in big trouble. Paul moved to stabilize his spine while I checked the rest of his body for injury and tried to cut away some of the rope and pack that he was tangled in. He suffered a serious head injury and his helmet was only loosely attached. He also appeared to have a leg or hip injury as he kept grabbing at it. He was combative and didn’t want to stay still despite Paul’s efforts to keep him from moving. Adding to the difficulty was that the climber didn’t speak English or French. He was talking but incomprehensibly until later when he finally said something in Spanish that I recognized and we able to communicate slightly.

A second team of French climbers was rappelling the Chere behind us and as soon as they came into view we hollared and signalled for them to help. Both arrived about 5 minutes after we did, and continued with first aid as well as trying to call for a rescue. I had my ski boots on and my skis were nearby so when we realized no one was getting cell reception, I started to skin to the nearby Cosmiques Hut to get help. After 5 min of skinning, my cell phone found service and I called the PGHM (Chamonix’s police rescue team). It was a quick conversation, I told them I spoke only english and that a team had fallen down the Tacul Triangle and one had died while the other was critically injured. They asked my cell number and told me a helicopter was on the way. That was it for the call. I skied back to the group where they were still trying to keep the man calm and stop the bleeding.

~15min later, we heard the helicopter coming. A second later, it swept into view. One of the French climbers signalled to the helicopter that we need help. We all covered the injured climber and ducked as the helicopter approached. It landed RIGHT on top of us. The nose was just a few feet from my butt and the blades just above our heads as we tried to get as close to the snow as possible. It was so loud and snow went everywhere but after a few seconds of hovering, three rescuers were out and the helicopter was away.

The rescuers assessed the scene and gave the climber medication. We helped them put on a cervical collar and then load the climber onto a stretcher. The helicopter came in again and the climber was loaded up and flown into the valley. The remaining rescuers asked us what we knew about the accident and then headed to deal with the body of the other climber. Paul and I were not really feeling motivated to tackle a steep ski descent so we skied out the Vallee Blanche and headed to the valley to decompress. 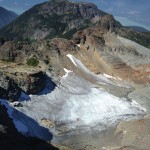 Sky Pilot Glacier from above. No more than 40deg but very slippery and covered with rocks and ice.

The accident on the Tacul was very reminiscent of the accident on Sky Pilot earlier in the summer where a new climber fell after slipping on steep ice. A group of runners that I was leading passed the area and just before leaving, we spotted the injured climber and his partner on the glacier and recognized that something was wrong. Two of us headed over to help and immediately realized that the situation was serious. The climber had sustained severe head trauma and was unresponsive. He was taking shallow and consistent breaths but we were unable to find a pulse (in retrospect, likely due to the already massive amount of blood lost). While another party arrived on scene and called Squamish SAR, we attempted to stop the bleeding. With a helicopter en-route, we were hopeful that the climber would make it. About ten minutes prior to the helicopter’s arrival, the climber’s breathing became irregular and much more strained. We decided to start CPR and my partner and I took turns. Just like CPR instructors say in courses, it is extremely strenuous. We were only able to take short turns. A physician hiker arrived just before the SAR crew did and started to assess the climber who had now completely stopped breathing on his own. The physician and newly arrived SAR tech agreed that the climber had died and that we should discontinue CPR.

In both the Sky Pilot and this incident, I think poor decision making was a major contributor to the accident. Both occurred in perfect weather/conditions. On Sky Pilot, the unexperienced climbers were trying crampons for the first time, unsupervised, and without a rope. If you want to practice climbing on steep ice with crampons, you might as well practice placing ice screws and use a rope – that would have saved his life. The climbers on the Tacul were simul-soloing – incredibly dangerous as the climbers are roped together but not attached to the wall. If one falls, the other must arrest or both are pulled from the wall. It seems wise to either take off the rope or place protection but these both take time. If the parties in either incident had taken a little bit of extra time to belay properly, several fatalities *may* have been avoided. I realize the irony of me talking about taking time and not being efficient as I have certainly used techniques (such as simul-soloing) that are pretty risky in the name of efficiency but dying is certainly not efficient. Also, in both of these accidents given the weather and the length of the routes, time was not a factor so time-saving ‘efficiencies’ such as simul-soloing were not required.

Spinal stabilization is important but in my mind, alive with a spinal injury is better than dead without one. In the case of the Sky Pilot climber, while I don’t think the outcome would have been different, I wish we had focused slightly more on stopping the bleeding rather than protecting his spine. It was difficult to see at the time because of the way that the blood dissipated on the glacier ice without pooling like it would on the ground. Only on standing back and seeing the blood running downstream did I realize how much he had bled.

Both of these incidents have made me much more wary of snow and ice slopes. I can’t say that I have changed much about my own ways but slopes do give me more pause than before. The slope on Sky Pilot is pretty benign looking. It probably didn’t even touch 40 degrees but the climber was unable to arrest and impacted ice and rocks on his way down.

I did take a few things away from both incidents: