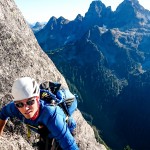 Will scrambling near the summit of Mt. Habrich.

I’ve been quite busy with school lately but after the Rubble Creek Classic, I caught a cold and took some mandatory rest time. This allowed me to get caught up on preparing lectures and even a few days ahead. So, when my cold settled, I was raring to get back out in the mountains, especially given the perfect fall weather.

In a rather Chamonix-like four days, I ticked off three cool climbs. First on Wednesday, I had class in the morning and then drove back to Squamish where I met Will and we caught a 1:00 gondola. We took off running towards Mt Habrich and made good time getting to the base of the route. We scrambled up the SE Ridge and tagged the summit before down climbing and rappelling the NW Ridge. With daylight running out and the last ride down the gondola looming, we pinned it back to the top station and caught our lift back to Squamish.

After Habrich, I hurried home for dinner and then re-packed my back for the next morning. Up bright and early, I met Paul and Carl and we made the 2hr drive up to the Duffy Lake Road. We hiked in the Joffre Lakes Trail and up onto the Matier Glacier. We circled around and started scrambling up the South Buttress of Mt. Joffre. A bit of fresh snow on the glacier had us a bit worried that we might be underprepared but the south side of the mountain was directly in the sun and thankfully snow free. Most of the route is an easy scramble but mid-way there are three pitches of rock climbing so we brought a rope and small rack. Carl tackled the first and last pitches, while I took the two in the middle. Paul was a little left out of the leading in his mountain boots but it was good to move efficiently as three (usually three is a bit of a cluster; two is ideal).

Above the difficulties, we scrambled to the summit and admired the dramatic North Face and its couloirs. Our goal was to traverse the peak and descend via the easier North Ridge. We knew we had to make a few short rappels and so headed down easy terrain until arriving at a cliff band. We made three 25m rappels and climbed one 30m pitch. The descent was complicated by new snow that had accumulated and not melted on the N side of the peak – it made for some searching to find rap stations. After the technical difficulties, we bombed down scree and gravel until arriving at the glacier. We raced down the lower slabs and back to the upper lake, arriving just at sundown. 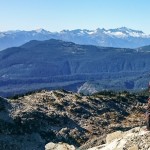 Looking down the Squamish valley from the Darling Lake area.

Friday was a work and strength day but Saturday morning came quick and Nick and I headed up the Mamquam FSR that has been newly improved thanks to a run-of-river power project. The BCMC has been actively building a trail that ascends from old logging roads in the vicinity up to the Park boundary and on to the Mamquam Mtn area. We found the new section of trail and crossed Paranoid Creek. From here, the trail disappears and we did about an hour and a half of steep uphill bushwacking. This took us to Darling Lake and the alpine, then another hour of steep gravel and scree to the glacier below Deception Peaks. 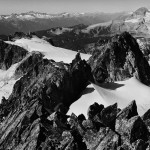 Deception Peak and Nch’Kay (Garibaldi) from the summit of Mamquam.

The glacier was in good shape and we crossed it to the NE to arrive at the base of the NE Ridge of Mamquam. The ridge is just 3rd class but is heinously chossy. We took great care not to eject any rocks on each other and arrived at the summit. The views of Squamish, the Chief, Sky pilot and Nch’kay (Garibaldi) are awesome and unique. The Warren Glacier is looking pretty sad. We also had unusual views of the McBride Range and the Misty Icecap. After a little break, we bombed back down to the lake and then struggled through the bush back to the creek crossing and trail. Hopefully the access issues in this area are resolved because it is an amazing spot with relatively easy access and could take some pressure off the busier park entrances.

That wrapped up the week and with my cold pretty much behind me, this week will be back to more dedicated training.

Paul and Carl approaching the climbing on Joffre.

Thinly covered crevasses on the Matier glacier – Paul found one by putting his foot through the bridge.

Paul and Carl on Joffre.

Carl scrambling near the summit of Joffre with the incredible Central Couloir below.

Ice seracs on the Matier Glacier.