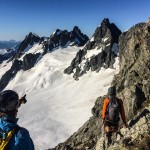 AlpinRunning in the Tantalus range.

Kilian Jornet can definitely take credit for popularizing the idea of light and fast travel in the mountains in a way that many had not considered. His idea of “alpinrunning” is to move with the speed and efficiency of a trail runner but on terrain previously considered alpine climbing. It’s not to say he’s the first to have the idea but definitely to bring it such popularity. His list of alpinrunning routes in Chamonix would make a good tick list for anyone looking to visit.

Squamish (and greater SW BC) doesn’t quite have the amazing lift access that Chamonix does. This means that while we have some great alpine scrambling terrain, it has generally more involved (longer) approaches. Consider it training! The list below is by no means exhaustive and has room to grow but includes both scrambles and traditional alpine climbing routes that can be attempted in ‘alpinrunning’ style. All should of course be attempted only when familiar with the skills, conditions, equipment, and so on. Most of these include at least a little bit of ‘proper climbing’ and should be evaluated for tackling solo or roped. Obviously changing conditions dramatically change the routes. The route files included are just to give an idea of the route and shouldn’t be counted on for actual navigation on climbing terrain.