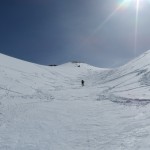 Nick climbing out of Grouse Creek

I had several packages to pick up at the PO box in Blaine Washington and had to drive down but figured I might as well make the most of the trip by skiing something so invited Nick along for a short day. We decided on a speed run up the standard route on Mt. Baker. A decidedly non-alpine start found us parking the car at the snow line on the road around 10:00am. We were just under 5k from the Heliotrope Ridge Trailhead and it was a quick skin up. 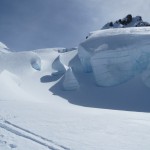 following ski tracks from the previous day. We were a little hesitant about avy conditions with the sun beating down but quickly found it was still hard and crusty. We gained Heliotrope Ridge shortly and cruised onto the Coleman Glacier. We passed three parties along the route and arrived at the Baker – Colfax Col where the wind picked up significantly. Ski crampons would have been nice for the Roman Wall but we pressed on and tagged the summit without stopping. Strong winds a the tippy top prevented a break so we dropped right back down the Demming Glacier and back on to the Coleman. A short food break under the crevasses and then we shot down the ridge and followed the creek to the TH. 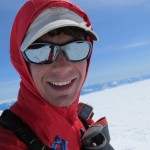 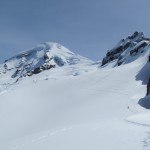 Mt. Baker and the Coleman Glacier

I was 2hrs 54min to the summit (Nick was 10min faster), and we were both 3:37 TH to TH. I immagine it has been done faster so I don’t think we can claim it as an FKT. Under 2.5 hrs should be reasonably doable on race gear. After getting sorted at the car we headed into Bellingham to kill some time and avoid traffic into Vancouver. We found a taco cart and filled up and then got on our way.

In addition to my standard race kit, I carried CAMP Race 290 crampons and the Corsa Nanotech Ice Axe and my new Patagonia M10 Jacket. I also tested out my new camera – a Canon ELPH 520 that will replace my Nikon which finally died. Not much time to stop for pictures but I got a couple shots. Ski crampons would have been nice for the steep slopes in Grouse Creek and the Roman Wall but not critical. 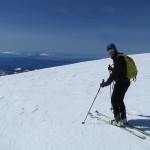 For food I had 2 GU Gels, 1 package of GU chomps and approx.2 liters of water. 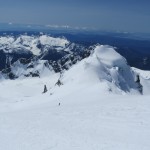 Nick skiing down the Roman Wall