Paul headed up the Birkenstock Couloir

I’ll admit to being very inspired by Stano’s recent interview with Trevor Hunt. One part that rang particularly true to me was Trevor’s comment: “Side-slipping is not steep-skiing, it’s just side-slipping”. While I try to live up to this mantra whenever I find myself somewhere steep, I must confess to being a side-slipper.

Paul and I took a trip to the Birkenstock Couloir just before Christmas. My second time to the area in as many weeks, we were not feeling optimistic finding moderate snowfall overlying an old surface hoar layer that was groaning as we worked our way up the road to the microwave towers.

All but abandoning our plan for the couloir, we took an excellent powder lap off Microwave Ridge before deciding to ski down to the base of the couloir so we could at least have a look at it. We quickly realized that sometime during the storm, the couloir had slid. There was no storm snow overlying weak layers, just a stiff base snow. Paul gave the thumbs up and we started climbing. 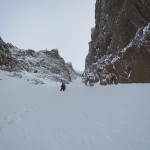 The two-hour boot-pack was long enough to let the anticipation boil over as we got higher and the slope steeper. Paul was especially encouraging while I was more and more vocal about concerns over my ski abilities. With the hope that I could at least ski MORE of the couloir than fall, I put my head down and focused on kicking steps to the top.

We stopped booting with just ten or so meters of low angle rock to the ridge but rope-less, we decided to stay on the snow and ski from our high-point. 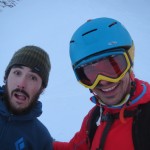 Switching from teetering crampons to the stability of fat skis brought some relief and hope that I could make the bottom without too much embarrassment. Paul dropped in and made quick turns out of the choke into the main couloir. I waited until he was out of sight and then did the best combination of turns and side slipping I could manage until the walls opened up and I met Paul.

He led the way again and we met at the bottom in a pile of high-fives. After a toast to a good line and plea for more snow, dusk caught us skinning back up to the microwave road and we put on headlamps for the long easy ski out to the car.

For anyone interested in heading that way, the road to the microwave towers has a *large* tree across it at approx 1080 meters so bring a chainsaw or don’t plan on driving any higher.

Looking up the final few meters to the rocks.

Just a dot in the white strip between black walls.