This weekend was the Canadian Skimo National Championships at Kicking Horse Resort in Golden BC. Last year it was a great event and I finished 2nd behind Scott Simmons. This year was a bit of a different story.

The previous organizer took a step back so Stano and I took on the challenge of organizing the event. It was lots of fun to promote and brainstorm ideas in the months leading up to the race but once the week rolled around and we were out marking the course and setting skin tracks, it was a different story. 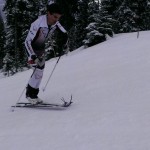 Friday evening was the vertical event with a mass-start from the base of the Kicking Horse gondola and racing up groomers that started off extremely steep and then slacking of to a gentle grade until the finish line at the Yurt mid-mountain. I started off hard and dropped back a bit mid climb. I made up ground on the flatter groomers as we neared the top but couldn’t quite reel back in Adam at his second ever skimo race and crossed the line in 5th. My legs were still tired from two full days of skiing around the mountain carrying GS gates!

Friday night was short on sleep as both Stano and I sweated about the Individual race. Everything that we could do to prep was done so at that point it was just about letting things happen and trusting that out preparation was sufficient. I flagged the first climb of the course during my warm-up and then headed to the start line to give the final pre-race announcements. The race started off with the standard run around the Eagle’s Eye Restaurant and despite being fairly slow in the run, I had my best skis on transition ever and jumped down the first descent in third! 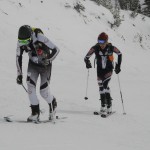 Nick, Ben, and I kept Reiner in sight to the top of the first climb but after he dove down the second descent, we never saw him again. Nick passed me on climb #2 and motored away on the switchbacks with a big gap by the time we hit the Tunnel Vision boot pack. The rest of the race saw Ben and I trading back and forth for third position. He seemed a lot stronger on the switchback sections and I knew that if he passed me before we hit the last groomer to the finish, I might be in trouble. I tried to out-ski him on the last descent but he stuck right with me and we were together up the switchbacks of the final climb. Luckily he didn’t pass me and we got onto the cat-track together.  We opened it up and started to really push. Ben made a move to pass me and even got a foot or two ahead but I had one last burst saved up as we got to the line and managed to nip him for third place. Sorry Ben!

It was a great race! It was awesome to see Nick ski so strongly. It was really nice to be able to ski with Ben the whole day. Last, it was great to see friends manning checkpoints all along the course! Stano was a good motivator to get to the top of ‘Dare’, Alexis sent me down the proper chute off T1 Peak, and Andrea was a welcome sight before the last climb. I’m really happy with the course that we settled on and found it a real challenge. I’m not the best at technical skinning or steep descents so it was not ideal for me but certainly good practice. We also had perfect snow conditions that made racing really fun.

After Saturday’s race, everyone stuck around for the party we hosted at the day lodge and then managed to drag themselves out of bed on Sunday for a day of free lift skiing at the resort. I am still recovering, a few days after, answering final emails and polishing up the results.

Now, back in Squamish, I am looking forward to skiing with friends on the Coast, hitting the schoolwork hard, and hopefully enjoying some sun and warmer weather!

As usual – I raced on my Dynafit PDG skis, DyNA boots, and Plum Race Bindings with Colltex PDG skins. During the race I had 4 Hammer Gels mixed with warm water in a flask and a small bottle with Hammer Endurolyte Fizz.

Boot packing race gates out onto the course.

Best part of the Vertical race. Finish line in the sun.