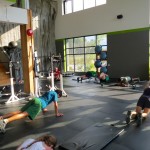 Core strength is critical for skimo races. Racers with weak cores become painfully obvious in the tail end of a race on technical terrain. You can watch as their upper and lower bodies get out of sync and they become unable to effectively transmit upper body power. A strong core is critical to keeping the upper and lower bodies in sync. Core strength is also important for injury prevention (and not just for racers, tourers as well!). Ski touring is heavily dependant on your gluteal muscles (your butt). Long days of touring causes these muscles to tighten and can pull things out of alignment. A strong core balances the glutes and prevents tightness.

I perform a core routine before almost every strength session and consider it the most important part of the workout. The basic structure is that used by one of my university instructors but has been modified over the years to suit me.

First, find a comfortable spot to lie down (yoga mat). Make sure you have enough space around you for errant limbs. The routine is performed as a cycle with options to lengthen by adding repetitions, adding entire cycles, or adding exercises. Forward crunches are the first and last exercise bracketing the routine. Oblique crunches make up the bulk of the routine and bracket each additional exercise. Starting position is on your back with your hips AND knees bent at 90 degrees. Return to this position between each exercise without resting. (PHOTOS COMING)

Perform each movement slowly to maximize strength gains. This routine can be performed on its own or followed by additional core work such as planks. When the effects of the routine are no longer significant, increase individual exercise reps to 15 or 20 per exercise and then by adding a second full cycle.

The following medicine ball exercises (there are many more – these are just my favourites) can be included in the routine as well. Grab a medicine ball that you are able to throw comfortably and safely. Most are performed in the upright starting position. You should be sitting partially upright on your butt with your hips and knees still bent at 90 degrees. Your feet should not be touching the ground and you should be slightly reclined.

Thats it! Find yourself a good gym and start working the core strength. Do it on its own or as part of a longer workout.

Also check out my previous article on leg strength and stay tuned for more strength routines!