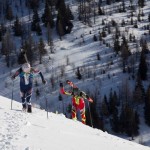 Nick and I racing at Canadian Ntnl. Championships.

This post is pretty long overdue but after crashing in a race over the weekend, I’m off training for a few days which plenty of time for catching up on my blog.

Summer came fast in Squamish and we’re solidly into running season. Before this though, winter was in full swing and pretty crazy. In March, I raced in the Canadian National Championships in Lake Louise. Nick and I were back and forth through the race but I managed to pull ahead on the last climb to take the win. We headed up the Icefields Parkway the next day to climb the Silverhorn route on Mt. Athabasca and wrap up a pretty good weekend. 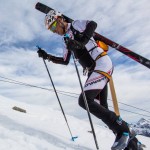 I tried to put in some big volume training days between Nationals and the PDG which culminated in the McBride FKT with Nick. I was pretty worked from the day but managed to get my feet back into ski boots and fly to Montana a week later to race the Shedhorn Skimo Race at Big Sky Resort.

It is a pretty rad course and very spring-like weather in Montana. A good friend from UVM, Jennie Bender, gave me a place to crash and drove me out to the race. I started out racing with Tom Goth who unfortunately had to drop out of the race when he broke a boot. From there I was skiing solo, trying not to let the warm temps get to me. These guys put on a cool event and the whole thing is well managed and fun. 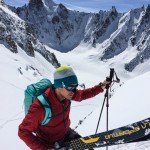 Colin skiing in the Argentiere Basin.

After the race, I hopped a plane back to BC and had a day to do my laundry and sort my gear before flying to Europe for my big race of the season, the Patrouille de Glaciers (PDG). First I landed in Chamonix where I was staying with my friend Colin. He’s an elite alpinist and had pretty much the best season anyone could ask for, first completing some incredible traverses in Patagonia this winter and more recently, soloing the Infinite Spur on Sultana in Alaska. He was just in the midst of getting ready to leave for Alaska and I was mostly keen on resting up from the McBride and the Shedhorn so we didn’t actually get up to anything particularly cool which was a bit of a shame though it was still great to have someone to hang out with. I spent a few days doing some mellow skiing in the Argentiere basin and spent a night acclimatizing at the Argentiere Hut. It’s a pretty unbelievable place to spend the night and the food is good. I wish I could have spent the rest of the week up there but it wasn’t really in the budget… 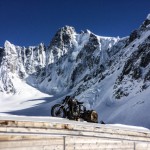 Argentiere Refuge. Not a bad place to read and eat cheese!

Colin was leaving and it was time for me to meet up with my PDG teammates. We have to race in teams of three so I had connected with Pascal Egli, a Swiss skier and mountain runner who had  spent some time racing in Canada and was one of my partners for the Mezzalama in 2015, and Lars Erik Skjverheim, a Norwegian World Cup racer who I’ve gotten to know over the last few seasons. We headed to Avoraiz, France, a crazy alpine ski resort on the border between France and Switzerland. The village is at almost 2000m and is left un-plowed throughout the winter so the only way to get around is by ski or horse drawn carriage. We stayed with Pascal and his girlfriend Katrine (who was extremely patient, having two extra dudes staying on her couch for a week). Training in Avoriaz was actually quite nice. The ski resort was shutting down for the winter so we were able to have parts of it all to ourselves! 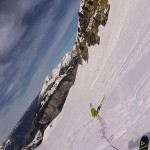 Struggling with our roped skiing skills.

We spent a week doing easy training on the slopes and practicing skiing together as a group on a rope, a requirement for the race because of the glaciated terrain that we would cross. I’m sure the resort skiers were a bit bewildered to see three skinny spandex dudes cruising around roped together though it seems all through the alps, the locals are well aware of the PDG and immediately knew what we were preparing for and quick to wish us luck or tell their own stories of the race. Lars Erik made a funny video that sums up our training in Avoriaz HERE.

Zermatt Church. One of the most hallowed places in Alpinism.

From Avoriaz, we drove to Martigny, Switzerland and then took a train to Zermatt. The weather was not great with clouds and rain in the valley but we were feeling hopeful and completed our equipment check and briefing and then ate a big meal before trying to get settled for an early bedtime given our planned 3:30am race start. Zermatt was bustling with skiers and seemed to be the skimo centre of the universe at the moment.

Everything in town was focused towards the PDG so the energy was pretty cool. Right before we turned off the lights, we got a text from the race organization that the race was postponed 24 hours. So, with no race the next day and no need to go to bed, we headed to the bar. The next morning, we got another text saying the ODG was officially cancelled. We were definitely in a bit of a funk over breakfast as the weather didn’t seem that bad and we really thought it was going to happen. 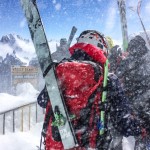 Cristina walking out of the Midi to ski on the Mer de Glace.

Instead of racing to Verbier, we geared up and skied from Zermatt up to the Kleine Matterhorn station on the Swiss-Italian border. I was feeling a bit bummed but the guys kept the mood light. I was pretty glad to have those two to keep things positive. After skiing, we pretty quickly had to hop on a train and pick up our car in Martigny before heading on to Chamonix. 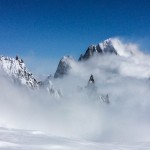 In Cham, Lars Erik and I got a place in a hostel and the next morning, we met my friends Will and Cristina who had come to watch the race. They were keen for a day of skiing and so were we so we all headed to the Aiguille du Midi to do a ski tour on the Vallee Blanche. We grabbed baguettes and snacks at the cafe and caught an early lift up. There was an amazing low cloud in the valley that we were above at the top of the lift before skiing down into it. We toured around in the fog for a while and shockingly found our way to the base of the Aiguille du Toule, which we scrambled to it’s summit before skiing the Vallee Blanche just in time to catch the last train from Montenvers to Chamonix. Will and Cristina treated me to fondue in Cham and I took them for a walk around town to see all the places I hung out the year before. Then it was time to pack our bags as both Lars Erik and I flew out of Geneva the next morning. 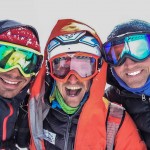 I was definitely bummed not to get the chance to race. Even with support, it was a huge out of pocket expense to have just cancelled. Not to mention, if I am going to be in the Alps for two weeks, I’d rather spend it skiing fun stuff rather than ‘training’. That being said, I still had a blast with all the friends I was with in those two weeks and can’t complain about the stuff we did! The biggest disappointment for me is that I think as a team, we were really ready to have a good race. All three of us had been training hard but were well rested and not over-trained. We were in a good mental place and our practice as a team was showing. I think we were ready to place really well but we just never had a chance to test it. In the end though, I had a blast and am glad I went! I’ll definitely be back.

Since then, I’ve not been skiing much. We’ve had a warm spring in BC and the snowline is receding quickly. This means it’s time for running in the valley and scrambling and climbing in the mountains. Nick and I have some big plans for the summer and have already done some cool stuff in the alpine. More on this to come!

Top of the podium at Canadian Nationals with Nick in 2nd and Rob Krar in 3rd.

Argentiere Basin – one of the most amazing collections of steep ski lines anywhere I’ve ever seen.

We had our apre-ski plans pretty dialled in Avoriaz.

Pascal talking with some local alpine racers about skimo equipment.

Waiting for our train to Zermatt…

The Swiss army runs the PDG and are VERY strict about equipment requirements. Everything was measured, inspected, and sealed by soldiers.

Race briefing in the Zermatt church before the PDG was cancelled.

Will walking down the arete from the Aiguille du. Midi.

Foggy Vallée Blanche – I can’t believe we managed to find where we were going!

Lars Erik near the Seracs du Geant on the Vallee Blanche