Our second week in Nepal started on July 25th with a 6 hour drive to a small one hut village called Ramche. After Ramche, the road has been broken into small sections by several landslides so from here we had to hike the majority of the way. 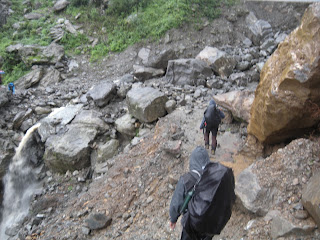 Lining up to cross the landslide.
The second landslide was still active so we took turns running across as fast as we could between microwave sized rocks that came whizzing out of the mist above. We all quickly learned the Nepali word for ROCK so when the spotters on either side started yelling we knew to duck. 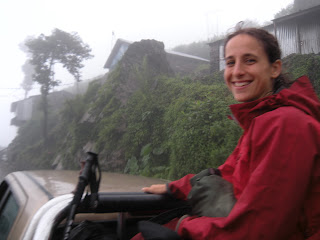 Nadia relieved to be in the Jeeps on the far side of the landslide
On the other side of the landslide, a jeep took us the last few kilometers into the town of Dhunche where we would be basing our research out of. Dhunche is a medium sized village with numerous hotels, shops, resturants, and a hospital. We set up our research and quickly started making friends around the town. 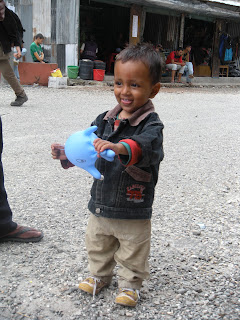 Our innkeeper’s son Sachem had a severe rash that one of the members of our team helped treat. We tried to keep him distracted from scratching – my surgical glove chicken lasted a surprisingly long time.
We split into two groups with the high team trekking up to Lake Gosainkunda at 4500m where the pilgrims climb up to worship. The low team stayed in Dhunche, the last low altitude stop on the trail, to recruit participants. 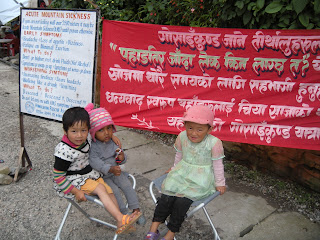 Local kids posing in front of our recruitment poster near the hotel in Dhunche.
We met with a series of government officials for final (unanticipated) approvals of the project and then commenced recruiting subjects. Pilgrims arrived on a fairly predictable schedule, buses arrived between noon and 7:00pm every day, and we settled into a routine. One of the high points of the trip was one on one time talking with different people, friends and strangers. We bought each recruit tea and biscuits for their participation so quickly became town celebrities due to the influx in business we caused. Many of the local kids also discovered we had a significant amount of free time and were entertained by their trouble making. 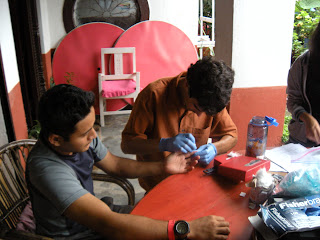 Testing hemoglobin in a religious pilgrim headed to Lake Gosainkunda.
On July 31st, with testing ramping down at the low team site, it was decided that myself and Utsav, one of the Nepali medical students collaborating on the study, would climb up to help the high team on their busiest day. We took 6 hours to climb around 1500 meters to Chandanbari where we stayed at the Red Panda Hotel. 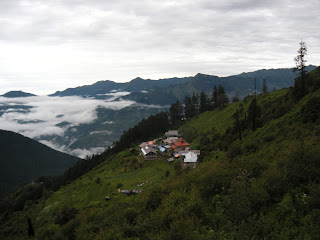 Looking down at Chandanbari.
The next day, we climbed the rest of the way to the lake and met the high team. Throughout the evening and night we say more people sick with AMS than we could count. After dark, we decided to stop data collection for our research and only helped provide treatment to people with Acute Mountain Sickness (AMS). Those who were really sick were led or carried to the health camp near the lake staffed by Himalayan Rescue Association volunteers. 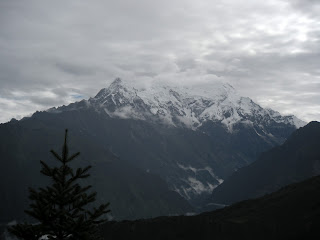 Early morning view of Langtang Mountain
I didn’t get much sleep between all the sick people and the stomach bug I was nursing myself. We started data collection the next morning at 5:00am and wrapped up around 11:00am. We started our hike down and made good time on the trail despite heavy rain and steep descent sections. By the time we reached the lower end of the trail, we were all pretty exhausted and my stomach was starting to revolt. We arrived back in Dhunche at 6:30 pm and Martin had ordered dinner for us. 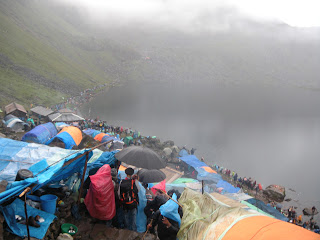 Lake Gosainkunda is a strange mix of alpine landscape and human impact. 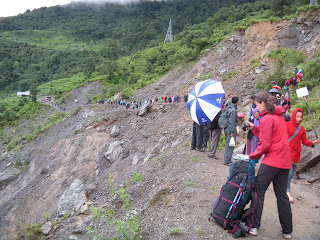 Lines of pilgrims crossing the landslides on the way out of Dhunche.
We left Dhunche early the morning of August 3rd and started making our way across the landslides. None were active which took away an element of stress but my stomach was continuing to get worse. The only food I had managed to keep down in the last 48 hours was a couple GU Chomp packets. Partway through the hike, Martin decided I was moving too slowly and hired a porter to carry my bag. He was probably around 85 years old, 60 kg, and definitely drunk, but I couldn’t keep up with him so lagged behind while he and Martin set the pace. When we got to the land cruisers on the far side we were all relieved and the 8 hour drive back to our hotel in Kathmandu felt easy.
Now we have a few days in the city to go through all the questionnaires and input them into spreadsheets while we have access to the Nepalis who filled them out. We will also have plenty of time for sightseeing and souvenir shopping.