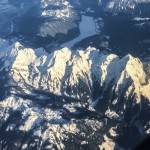 Passing over the Rocky Mountains on the way to Castle.

January has been a whirlwind of travel. I wrapped up my planned data collection for the semester over Christmas break and my leave of absence from school started on January 1st. In what was probably an optimistic at best and more likely unwise fit of planning, I arranged a series of flights, car rides, hostels, and houses to crash in, leaving Squamish on January 5th, first to go to Castle Mountain in Alberta, then Sunlight Mountain in Colorado, then back to Squamish, and on to Andorra and finally finding myself now in France in one continuous fit of travel. I’ve become fairly practiced in living/training/racing/working from a suitcase but lately my limits were tested! 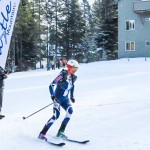 I’ve gone to the Castle Mountain skimo race three years in a row now. I originally planned on missing it to spend time in Colorado acclimatizing to the altitude but after auto-qualifying for the individual race at Worlds at the early season qualifier in Idaho, I decided I’d rather head to Castle and spend a bit more time with friends than banging my head against the wall in Colorado.

Castle is a fun little resort in the middle of nowhere and the entire Canadian Skimo contingent converged on January 7th and 8th. Saturday was a sprint event and Sunday and individual. With nothing other than bragging rights riding on this one, I was happy to just enjoy the weekend with low stress. The sprint was good practice and I was happy to be pressed by the other guys though disappointed to have Nick disappear after an equipment error in the quarter-finals. 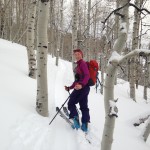 On Sunday in the Individual race, despite some difficult snow conditions, Nick and I worked together to get through the first climb before racing each other on the second. I’ll admit that the on-piste climbing favoured me a bit more than a technical climb but I was happy to open up a little gap. I was definitely looking over my shoulder on the final ski into the finish.

The original plan was to catch a ride with Stano from Castle to SLC where we’d meet Andrea and then continue on to Colorado but car trouble meant he couldn’t make it to Castle. I booked a flight from Calgary and begged Kylee (rock star of the Canadian women’s team) to put me up as it was repeatedly delayed out of Calgary. Finally in SLC, reunited with lost baggage, Stano, and Andrea, we stayed with the Dorais family for a few days before heading on to Colorado.

The weekend at Sunlight featured a sprint on Saturday and an Individual Race on Sunday. Because I only needed to finish in the top-8 in the individual to qualify for the Teams Race at Worlds, I figured I’d try my luck at the sprint. Stano and I helped out setting the course so I had a pretty good idea of the best lines. The qualifying rounds started just as it got dark and it was a bit erie seeing headlamps bobbing up the course into the fog. The course was quite long – taking 5-7 minutes (a typical World Cup Sprint takes 3-3.5 min). I was surprised to find that I set the fastest time in the qualifier so I kept going on. Mercifully, the race only had semi-final and final rounds (no quarterfinals). I stayed at the front of my semi and found myself next to Max Taam in the final. I knew he’s a strong descender but figured I could put some time on him on the up and try to get ahead of him on the down and not give too much room to pass.

We took off hard and I did get ahead coming into the top transition. I felt like I was skiing fast but he charged up behind me and pulled a brilliant pass on the inside of the final corner coming into the finish to take the win. I’m pretty happy to have taken second and it was a good practice.

On Sunday, the individual race was a fun one. Lots of skiing through aspen trees with the majority of the race being in the backcountry but below tree-line. The 4th Worlds Individual spot was up for grabs as well as the 8 Teams positions so it was a hotly contested race. Tom Goth was on a mission to qualify and charged along close behind John Gaston while a large group rotated around in the top 10. I tried pushing along with John and Tom but quickly realized that with all the travel and racing already, I wasn’t feeling it so I was content to sit back a bit and keep myself in the top 8. I skied the majority of the race with Jon Brown and had a good final descent to sneak into 6th or 7th (?) place.

Sunlight was a fun weekend and it’s always great to see the American crew. It was also really fun to have Andrea along at a race to cheer and help make it a bit more fun! After the race, we hopped in the car with Stano and started our 24 hour marathon drive back to Squamish where I had one day to do laundry, re-pack, and hang out with Andrea before flying to Europe.

While the ski-racing life may look like all fun and powder, the less glamorous side of it is all the travel – a topic probably worth it’s own post in the future. I had barely recovered from the race in Sunlight and I was already getting dropped off at the airport by Andrea for my flight to Europe. 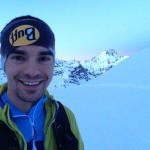 Stoked to make it to Europe and get the skis on!

During the 2015 season that I spent in Europe, I felt like a big part of the stress I encountered was just getting the hang of life in Europe so this season I was excited to get back, knowing what to expect and to continue to improved. I grabbed a rental car in Toulouse, France and headed straight to Ordino, Andorra where I joined up with the Norwegian team who kindly adopted me for the first set of World Cups. While my races (an Individual and Vertical) didn’t quite go as well as I’d hoped they would and my early-season results suggested the could, I’ll chalk it up to the altitude, jet lag, and a cold that I caught during travel. While I’d probably have advised any of the athletes I work with not to start the race feeling a bit sick, I decided that it would be a long season, I’d have time to recover, and it would still be good experience to race. This was definitely the case. I didn’t feel great but I did have fun and I absolutely love the Font Blanca venue. It’s beautiful and the organizers and volunteers really try to make it a good race. While it is mostly out of the ski area boundary, the course is easily accessed by spectators who make the ambiance much more exciting. 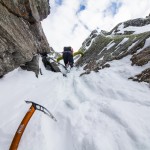 Down climbing a rocky section!

After the vertical race, we packed up and drove through Spain over to the French side of the Pyrenees and the Cambre D’Aze venue. The Norwegians had a small (very small) AirBnB that we shacked up in for the week and spent our time resting and trying to figure out where exactly the weekend’s race course might go. Snow continued to fall throughout the week making for some fun powder skiing but making the original planned course unlikely. In the end, the Plan C course was selected due to so much new snow. It took place entirely inbounds of the ski area but felt a bit more like a real race because instead of pistes, we had great powder runs! Despite all the snow, the course was well set and fun to ski. I started hard but got boxed out of the correct skin track when we turned into the trees. This put me one group behind where I wanted to be and so I pushed hard on the second ascent to catch up. I ticked off a few racers on the climbs but was also passed by a few fast guys on each descent. Feeling significantly better than the previous week, I finished 37th. Still not quite where my training suggests I can be but much better than the last week!

I had high hopes for Sunday’s sprint race, at least to qualify, but it was not meant to be. I pushed hard and felt like I metered my effort well but I fumbled a bit putting my skis on my pack, charged hard again but then skied the descent pitifully slowly. While I’m not particularly perturbed about this, It would be fun to once qualify for a quarterfinal just to get a chance to try going head to head. Luckily, the racing action was still exciting so I booted out onto the course and cheered for the rest of the rounds before hitting the lifts with Sindre and Sondre for some afternoon on-piste action. 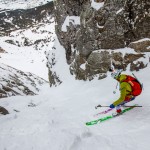 Looking down towards the Cambre WC race course. Sadly we didn’t get to get up into this terrain!

Monday morning, the majority of the Norwegian contingent headed home while Lars Erik and I opted for two more nights in Cambre to enjoy the good weather that had rolled in and get a bit of training before heading on to Cham. Kilian kindly recommended some couloirs to explore so we headed out to the back of the massif and we enjoyed a nice day playing a game of ‘does it go?’.

Now, I’m back in the Alps and staying just down-valley from Chamonix. The snow pack is a bit more grim here. It will be a bit of a bummer not to have the Norwegians as built in training partners but it will be a good chance to relax and go eat my own pace. A bit of a reset before the craziness of Worlds begins.

Racing the sprint at Castle Mountain.

Great to see Alexis with skis and a bib on again!

The race organizers in Andorra do an awesome job. They put on a great race!

Back seat driving during an interval session.

Lars Erik opening up some big turns in Cambre.

Lars Erik looking excited for some steep action in Cambre.

Lars skiing on of several lines.

Lot’s of blue skies in the Pyrenees!