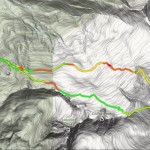 Mt. Baker with our track up the N. Ridge.

Nick and I have had out sights set on Mt. Baker’s North Ridge for a month or two now. The ridge offered good training for a bigger objective coming soon but also an interesting ski mountaineering objective in its own right. 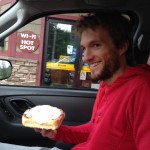 He couldn’t hold back the smile when he got back into the car with breakfast.

Our goal was to climb the NR, cross over the summit, then rejoin the standard route and ski down the Coleman-Demming to the car. Two weeks earlier we attempted the same plan but were turned around low on the route due to warm temperatures and slush. We got an obscenely early (for us) start from Squamish, fuelled up on sweets, and after getting our usual interrogation at the border, we were skinning from just below the parking lot by 7:45am-ish. Despite the parking lot having snow, there was none to be found in the forest so we took skis off, started our watches, and ran into the trees. We thrashed up a faint trail along grouse creek for 10min until hitting snow and then managed to skin from there with only one creek crossing low down. 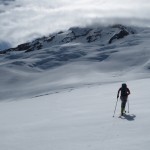 Clouds on the summit worried us early on but blew away as we approached the base.

Conditions were a bit slushy low down but by the time we reached the head of grouse creek, things were firm and we were moving quickly. I used ski crampons briefly at the top of the creek but then put them away for the day. We took a long sloping traverse past the football field and onto the Coleman Glacier. Crevasses are starting to open up but were easy to avoid and we made it to the base of the North Ridge in just under 2 hours. We did a rather slow transition to crampons and headed up the left-hand, less-steep snowfield leading up to the ridge. At the base of the ice cliff, we pulled out the rope and Nick set off up the left side right along the lobe. Nick led the short-lived but steep ice like a man on a mission. One 50m pitch took us to a crevasse with a decent spot to belay. Nick stemmed out and crested the ice step, running out the rope onto the easy low angle ice above. I swung past him and onto the neve. A bit more booting past the summit seracs and crevasse and then we put away the rope and put skis back on to skin to the summit in around 4hrs 35m. 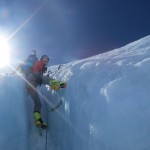 This crevasse was a good belay but a pain to get out of. 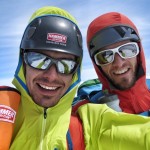 We took a couple quick photos and then ripped skins for the descent down the Coleman-Demming route. We passed a few parties near the summit and bombed down to the car. The snow on most of the mountain was great corn and we had fun carving eights until we hit Grouse Creek where the sticky snow grabbed our skis and threatened to dump us. At the snow lone, we pulled off our skis and ran down to the parking lot, stopping our clocks at the outhouse in 5hrs and 14min. 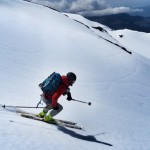 Blasting down the regular route in good snow.

It was a great day for us to practice our systems and get a feel for some alpine ice. I also suspect that 5:14 is the probably the fastest that route has ever been completed so I am willing to call it a speed record but please correct me if I am wrong.

It is crazy to think that it took me almost 48 hours the last time I climbed this route. I think I used about 10 ice screws when I led that first pitch. Amazing how we learn and the standards are raised…

Conditions on Baker were excellent and both routes were in good shape. There were steps kicked up the NR from the weekend but with the firm conditions, it was easier to make our own track. The CD has a superhighway of ski/boot tracks up and down with minimal crevasses. Grouse Creek will likely be impassible soon and cars will be almost able to park at the parking lot.

It was hot down low on the route.

The clouds lifted and we could see our route on the left hand skyline.

Skinning across the Coleman Glacier toward the N. Ridge.

Nick climbing onto the ice cliff lobe on the first pitch.

Experimenting with ways to save weight. Using lightweight titanium ice screws from Andrea’s dad. An anchor – old on top, new BD on bottom.

Nick at the last belay.

Nick above the ice cliff.

Picking through serac debris near the summit.

Skiing down the Coleman Glacier.

Creek crossing near the parking lot.