Many athletes and coaches use the term lactate threshold. Sometimes it is used in reference to a particular workout intensity and sometimes to testing but many times the meaning is unclear.

What is lactate and the lactate threshold?

We are able to live and exercise because our bodies are incredibly efficient at taking food and converting it into energy that we can use. Fat, carbohydrates, and protein are the three main types of nutrients that we can convert to energy.At rest and during low intensity exercise, fat stored in our body is the primary fuel source with small contributions from carbohydrates and protein. As we ramp up the intensity of exercise, carbohydrates make a greater and greater contribution to energy production while fat use goes down. One of the byproducts of converting carbohydrates to energy is something called lactate or lactic acid. It is measure in the body as blood lactate concentration, symbolized as [L+]. This byproduct can then be converted back into energy or is removed from the bloodstream by the tissues. As exercise intensity increases, so does the use of carbohydrates as an energy source and therefore, the production of [L+].

Eventually, the production of [L+] increases beyond the ability of the body to remove it. At this point [L+] accumulates in the exercising muscles and the bloodstream. Physiologists call this point the lactate threshold. A more technical definition is that the lactate threshold defines the highest oxygen consumption (VO2) or workload that can be obtained with less than a 1mmol increase in [L+] above pre exercise levels.

A separate value, onset of blood lactate accumulation (OBLA) is defined as a systematic increase in [L+] to a VO2 or workload that increases [L+] to 4mmol above which, [L+] will continue to increase. The OBLA is typically explained as the maximum exercise intensity that can be sustained for any prolonged period of time though that seems like it might be a little off. A paper by Bassett et al., (1997) shows marathon runners competing at speeds 8% above their OBLA.

Usually the terms lactate threshold and OBLA are used interchangeably as they typically occur very close together however their meaning is slightly different.

Why is this important?

The lactate threshold (LT) represents a shift in the body’s usage of energy that goes from sustainable to unsustainable. Below LT, the body is using primarily fat as a fuel source; above LT, carbohydrate becomes the primary fuel source. Athletes know LT as the point where exercise goes from comfortably hard to “I don’t know how long I can last!”. Once we know where this point is, we can use it for two things. The first is for pacing. I know that my easy/long run pace should be below my lactate threshold. If I start to go above this, I am working into a different zone and may not be able to finish my goals for this workout. The second reason to know your lactate threshold, is to target your training to increase it, more on this below.

What is the procedure for testing?

Lactate testing requires a special meter designed to measure [L+] in a sample of capillary blood (a small drop from a finger prick – similar to a glucose test). The most common meter and the one I use is the Lactate Pro (distributed by Fact Canada). The process is quick and easy: 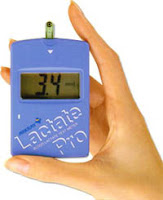 Thats it! After about thirty seconds the meter will give a reading. Sometimes, after repeated measures, fingers that have been poked previously will still be bleeding. It is fine to use these without repoking a new site as long as the site is wiped clean and fresh blood used.

The process is usually done by the athlete’s coach or physiologist. It is also possible for the athlete to do themselves though a bit trickier. If you are planning on testing yourself, it is good to have practiced a few times and have your routine down before trying in the field.

My protocol is similar for both running and skiing. I usually select a location that allows for a 3-4 min steady grade climb with a short descent where I can do several loops. I use the same locations consistently to provide useful comparison between tests. For skiing, there is a steep, steady climb that winds uphill through the Cypress Mountain Nordic area. A shortcut allows a quick descent back to the start. I stash my bag with testing supplies at the top and start my test at the bottom. The test consists of 8-12 laps of my 3-4 min climb. The first lap is essentially at walking pace and I gradually work up to full speed. I generally try to increase my average HR between 5 and 9 beats per minute each lap. Each lap is timed and I know the altitude gain so vertical speed can be calculated. As I ski into my test station at the top, I:

As soon as the meter begins analyzing, I transition to ski mode and descend to start the next interval with a brief rest at the bottom. The result can be recorded when you finish the next interval before starting the next test.

How do I interpret the results?

Following the test (and a bit of calculating to find vertical speed based of lap time and elevation gain) we end up with a table similar to the one below:
These are plotted on a graph with Ascent on the X-axis and HR and L+ on separate Y-axis. Excel usually good enough if you have some time to tinker with it. Google knows a lot about excel if you have problems (like displaying two variables on separate Y-axis). The graph below is decent but the scale of the X-axis could be improved by making it even. 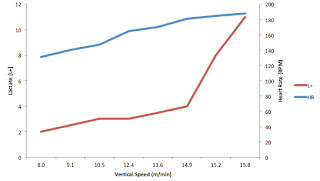 In this graph, a clear increase in [L+] is seen at around 15 m/min and this corresponds to a heart rate of around 180 bpm. This deflection point is the onset of blood lactate accumulation.
In healthy, untrained persons, the lactate threshold is somewhere near 55% of their maximal aerobic capacity (VO2max). In highly trained endurance athletes, lactate threshold might be between 80-90% of VO2max. This is an adaptation in the body allowing the athlete to exercise harder for longer. While VO2max might not change all that much over the course of an athlete’s career (think of it like the ceiling), training will push the lactate threshold higher and higher (in the graph above the red curve would be pushed to the right).

The purpose of training for endurance races is to increase velocity (be it skiing or running) at LT. Factors that influence this are the VO2max, %VO2max at LT, and exercise economy. I won’t discuss increases in VO2max here, but traditional endurance training achieves increases in %VO2max at LT by increasing the density of capillaries in muscles and the oxidative enzymes available for energy production. Exercise economy is improved through improvements in technique, biomechanics, body composition, and equipment selection.