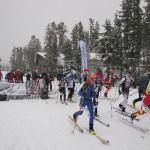 Racers taking off from the start line at Castle Mtn. Photo Credit Unknown.

The first skimo race of my season is in the books! Nick and I took off from Squamish on Thursday morning and picked up Kate in Coquitlam (where we were treated to awesome waffles by Andrea) and then started the long drive East. I don’t think any of us really appreciated how far it is from the Coast to Castle but let me tell you it is a long freaking way. We made it to Revelstoke where we planned to crash with Igor but with the snowy forecast and Igor’s 50-50 odds on Roger’s Pass being closed in the morning, we pressed on into the storm for a white knuckle night drive over the pass to Golden where we stayed at my favorite hotel – the Rondo.

The next day, we picked up Reiner and Carla in Golden and headed out for Castle Mountain. We arrived around 1pm and immediately took off to ski the first of two climbs in the race. There was new snow falling and we got the best snow of the season! There was a short race meeting and we crashed in our 6 person hostel room early in the evening.

In the morning we woke up to lots of new snow. Patrollers were excitedly dropping bombs above the tree-line and shoo’d us away while warming up. It quickly became apparent that the race would not be held in its planned form and sure enough, 10-min before the start, organizers announced a 1-hour delay and that the race would be run as two laps of the 2nd climb and rather than descending steeper terrain, we would descend along side the up-track (essentially a 2-lap out-and-back). A bit of disappointment among the racers was evident but we lined up at 11:00 and took off. 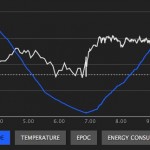 Peter Knight took off in the lead and as he faded I tried to keep the pace high as my skins were gliding well. Reiner pulled to the front and started setting the track up an un-groomed run. With the new snow and warm temps, my skins (as well as those of several others) started to accumulate significant snow under the bottom – “balling up”. Balling skins makes gliding impossible with the skis just dragging in the snow and adds significant weight to each step. Halfway up the first lap, as Peter and Nick overtook me, I decided to cut my losses and switch to a fresh pair of skins. I dropped into 8th place and spent the rest of the climbs picking racers off. I pulled into 3rd just behind Peter as we arrived at the top transition. Nick and Adam Campbell arrived moments later. Peter beat me out but I skied past him on the descent and arrived at the bottom alone.

The second climb, Reiner was out of reach (but not out of sight) ahead and Nick was distressingly close behind but clearly struggling with equipment. Knowing Nick’s strengths as a downhill skier, I skied both descents as aggressively as possible in the blowing snow – not fully in control at times. I finished a few minutes behind Reiner with Nick then Peter (whose Ion flow was clearly disrupted) arriving shortly after. 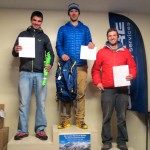 After the race I was completely soaked from the wet snow and made quickly for the shower in the hostel. We hung around for a few hours to attend the awards and score some snacks and then headed out for the long drive back. We made it to Golden in the evening and then had a very blizzardy drive over the pass to get to Revelstoke where we stayed again with Igor.  Sunday’s drive back to the Coast was a bit of a blur but we made it in the early afternoon despite a detour around the closed Coquihalla hwy.

While the long drive was rather spirit crushing, I was pretty happy with the outcome of the weekend. The race, despite a very limited course, was well organized and still had a “full-on” feel to it because of the weather. It was fun to push a hard effort on the ups and downs. There was also a really great group of people at the race. We had a fun car ride, listening to the latest skintrack.com podcast. Nick and I tried our best to discreetly wring racing secrets from Reiner and he seemed happy to answer all our questions.

One take away for me is that a pair of short skis makes for really good glide and that even if you are racing in the Rockies where it is always cold, it might be warm and wet so definitely wax the skins. All the strength work in training has been paying off as I felt very strong on the descents though I still have a bit of work to really do my best. I didn’t do the best job of pacing, climbing significantly slower by the end of the race (1st half of climb 1: Avg HR 180 & speed 5.4km/hr, 2nd Half: Avg HR 174 & speed 4.4km/h, 2nd Climb Avg HR 166 & speed 4.1 km/h) but that can mostly be explained by snow conditions and redlining it early on in the hopes of sticking with Reiner as long as possible.

A few stats we calculated on the drive home:

Next stop is the Whitefish Whiteout in Montana on January 24th! Already pretty excited for it.