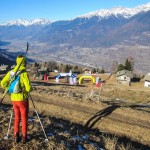 A little race analysis. On this quick trip to Europe, I managed to sneak in two World Cup races. The first in Albosaggia, Italy, and the second in Les Marecottes, Switzerland. The Italian race featured an Individual and a Sprint event. The Swiss race also served as the European Championships and so featured a Vertical, Individual, and Sprint.

My individual results were both lacklustre. In Italy, snow conditions were extremely low, with the start and finish in a snow-free pasture. These conditions proved especially challenging on the descents where I already lose time. While I’m glad I participated in the race, I found that my technical skills and willingness to ski with reckless abandon were the limiting factors instead of my fitness. 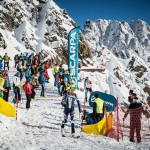 Luckily, in Switzerland, snow conditions were much better to start with additional snowfall the day prior to the race. I skied a better race here and definitely felt like I was pushing my fitness. A lost pole strap and a few tables in the soft snow on the descents ate up time but I still finished respectably.

A vertical race is slightly easier to analyze because of the nature of the event. It is one continued effort. There are lots of different ways to analyze a race but the basic metrics are easiest. Finishing place is important (World Cup points are given to the top 30) but is highly dependent on the level of competition. Percent off the leader is useful as the top few places in a World Cup will always be coming from strong athletes even if there is less depth further down. Climbing speed is interesting but I think ultimately unreliable between races because of the variation in course profiles and snow conditions. Average HR gives insight into how strong the engine is, especially when combined with other metrics. Below is the data from the four World Cup vertical events that I’ve competed in over the last 12 months. 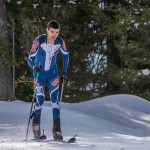 The race this weekend in Les Marecottes was not my best performance though I think pretty close to my potential. It was a rather unusual format with racers starting every 20 seconds in a time-trial format. While I finished outside the top 30 and quite a ways from my Mondole result of 25th, the race had quite a bit of depth. Just several seconds would have earned me a few places, 16 sec would have put me in the top 30, and 60 sec would have be in the low 20s. Of course, this is pretty speculative because I was going close to all out though I still think I had 20-30 seconds to find somewhere in the race. It is definitely good to see avg HR the same as the Mondole race. 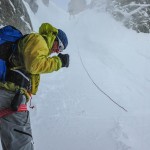 These were also my first races with some new bits of gear. I raced on Fischer skis back in my Nordic ski days and am stoked to have started a new relationship with them for ski mountaineering. Their race ski is called the AlpAttack and is dramatically different from the DyNA that I have been skiing on the last few years. The AlpAttack has a good amount of rocker in the tip and quite a bit of camber. I’ve paired them with Dynafit Low Tech Race bindings with the new Pierre Gignoux heel piece and so far it seems to be working well. We will see how the setup fares over the rest of the season. I also used the latest prototype race vest (called the Skimo8) from Ultimate Direction. I’ve been helping them design the new pack for the last year and am stoked to see how it is turning out. More on this soon!

Next up is US National Championships in Crested Butte, Colorado. I don’t quite know what I was thinking, deciding to fly to Colorado less than 30 hours after flying home from Europe but thats the plan! It definitely looks like a cool set of races!

Lots of stuff to bring to Europe!

Nick ‘climbing’ on a rest day in the Argentiere basin.

The World Cup opening ceremonies are always a bit interesting. This was no exception featuring an Italian opera singer!

Low snow coverage on the race course in Albosaggio.

Scouting out the Alpiniski Individual Course.

Nick finishing strong just 2 seconds ahead of me in the Alpiniski Vertical.

Not a bad backdrop to the day! Hello Mont Blanc!