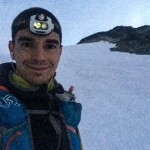 Just after sunset on the Blackcomb Glacier.

September has been a fun mix of training and racing. Compared to the winter season, I don’t race all that much in the summer. I’d rather be out climbing or in the mountains and not many of the races around here really pique my interest. It’s hard to beat racing at Whistler Blackcomb though.

Their 2nd year running, the Valley to Peak race is a fun one. Despite the first half being on mountain bike trails and roads, the race redeems itself completely after passing the Roundhouse and setting into the alpine on the High Note Trail. It’s definitely one of the cooler places to be on the mountain. Nick and I started together but when we hit the downhill sections above the Roundhouse, he pulled away pretty quickly. We cruised up and over the peak in a snowshower and then fast down to the finish. 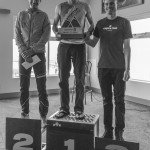 The last weekend in September was a busy one for racing with both the Grouse Grind Mountain Run and the Rubble Creek Classic. At Grouse, I was stoked to finish second (and 4 sec under my pr) to Nick but a little bummed when we found out the the previously, rather generous prize money, was no more.

The Rubble Creek Classic is one of my favourite races in the Sea-To-Sky. I’ve written about it before so I won’t go into detail but it is self-supported, unmarked, and on an aesthetic point-to-point route in one of the most spectacular places in the area, deep in Garibaldi Park. 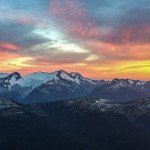 Sunset over Whistler on an evening scramble.

Because of the CMTS WAM race on Saturday, the RCC didn’t get quite the uptake it normally does, compounded further by the spitting rain and rather threatening weather. I had a good run however, with a ~3min pr and my first ever win, while Ann-Marie set a new female course record! Andrea also jumped in the race and finished right at her goal time! The same weekend, my parents were in town for a visit that included an ill-fated canoe expedition down the Squamish River.

Training has been going well. I don’t do much (any) intensity over the summer so adding in some harder workouts has felt good. I’ve also started doing strength work again. After a nice recovery week from the weekend of racing, I’ll be back into a big block of training for the month of October. 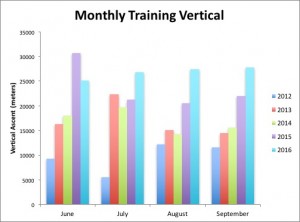 Andrea bombing down to the finish of the Rubble Creek Classic.

Partway around the Howe Sound Crest Trail – one of my harder efforts of the month.

Volunteering at the CMTS Sky Pilot race with Will and Paul.

Will, Paul, and I’s camp spot on Sky Pilot Ridge.

Last photo before the sinking.