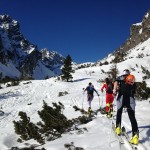 Skinning up to Teryho Refuge on our first day.

After World Championships, we took two days of train and car travel to get to Slovakia. I’ll be honest and say that I was a bit skeptical about leaving the Alps, mecca of all things ski mountaineering, in the middle of the season to visit a tiny country in Eastern Europe. We came to visit Andrea’s family. Her parents immigrated to Canada before she was born and her extended family – grandparents, aunts, uncles, cousins, and family friends – are all still there.

We stayed with Andrea’s Aunt and Uncle and they have been ridiculously hospitable. We have essentially taken over their apartment in Poprad with ski gear and drying sweaty clothes but every day they still cook us meal after meal of unbelievably tasty food.

On our first day, Andrea’s cousin’s Matus and Martin took us for a tour in the High Tatras. The Tatras are a small range that straddle the border between Slovakia and Poland. The range tops out around 2600m with the valley floor around 500m and reminds me a lot of the Tetons.

My first impressions of Slovakia and the Tatras were of the very visible contrasts. Temperatures fluctuate between bitter cold and windy, to calm and hot. The sun shines strong but when it passes behind a ridge, things are dark and icy. The steep peaks and ridge lines rise sharply out of the flat plains surrounding the range. Easy tourist routes are minutes away from extreme terrain. Poverty and prosperity are close together in the city and at the resorts. Grey concrete clashes with colourful paint splashed on apartment buildings. Cities are fairly dirty, with concrete high-rises while quaint old villages lie quietly in the countryside.
All of this is compounded by the fact that the Slovak language is completely different from English. In Andorra I was able to fall back on high school Spanish to get by. In France and Switzerland I started to pick up some basic French. In Slovakia, I am entirely dependant on others who speak English (mostly Andrea). 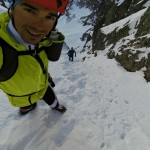 Halfway through a big day of training and some steep skiing.

So back to the Tatras: After our first tour with the full group, Martin and I made plans to get in a full day of training. I wanted to get a few big days in to prep for the Pierra Menta so we headed out with the goal of fully exploring the same valley and racking up 3000m of climbing and as much interesting steep skiing as we could find.

Andrea dropped us off at the ski resort base. There are only a few ski resorts in the Tatras and they are pretty small. All in all, especially compared to the Alps, the Tatras are human powered. There is only one telepherique to a summit and it is not really used to access the range – its more of a tourist attraction. Most skiers skin in from the road. We skinned up 1300m to the top of the ski area and then up to a sedlo (col) we had spotted the day before. The sun was just starting to hit the 700m couloir we planned to ski and it was icy. As we inched towards the entrance, Martin looked over at me and asked if my edges were sharp. I said no. We aimed for the far right side of the couloir hoping that it would be softer and started making ginger turns down into the gut. A handful of chamois scattered away as we scrapped by. We hit the main section of the couloir and realized it was quite icy after a few days of freeze-thaw. Not wanting to turn around and bootpack back up, we decided to shoot across the gut to the far left side and hoped that the snow there may have been hidden from the sun. Edging across hard ice with my axe out, just above the steepest part, I was stoked to find fresh, chalky snow along the left hand wall. We cruised down the couloir and when we hit the fan and it opened up, we started to relax. We found out a few days later that the next day, a skier slipped on the ice and died after falling the length of the couloir. 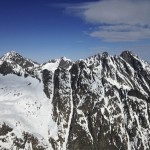 We skied the smaller couloir just to the left of the prominent couloir in the centre.

We ticked off two more beautiful 700m couloirs, one North facing, untouched by the sun, chalky snow, and narrowing down to just a bit wider than our skis, the other South facing, and by the end of the day, nicely softened by the sun. We stopped at the Teryho Chatra – a mountain refuge – for tea and a chocolate donut type dessert called Buchty. The Chatras (refuges) are located strategically throughout the range along the main tourist routes so that just about any hiker with crampons and hopefully a bit of avalanche knowledge can find them.

With both Matus and Martin back in Bratislava for work, the next few days I was on my own for training. Luckily we had nailed the weather window and with the decent snow cover and daily freeze-thaw high pressure system, I was pretty confident going solo on all but the most committing stuff. Mostly I was disappointed that I had left my ice tools and real crampons in Chamonix. 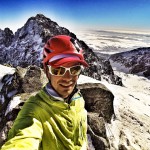 I had another beautiful day exploring the last few peaks around the Teryho Refuge – Baranie Rohy and Maly Ladovy Stit – both required a few steps of scrambling on rocks and steep snow that slowed my progress – I didn’t hit 3000m vertical but sometimes it’s more important to climb something fun than focus on the numbers.

Earlier in the week, Matus pointed out the King Couloir on Slakovsky Stit, one of the bigger peaks in the area. Slakovsky Stit has a well travelled tourist route on its South Face but the North side of the peak is split by just one continuous couloir (in the current snow conditions anyway). My plan for the next day was to explore the valley near Slakovky Stit but as I skied up past the couloir, I couldn’t help wanting to scope it out. Old debris from the last storm cycle and a set of more recent tracks made me feel confident in my judgement of conditions. I decided to scope it out and turn around if the sun ever hit the walls surrounding the couloir, spilling snow into it.

The King Couloir. Not as bad as it looked from below!

The snow inside was firm and cold – unaffected by the sunny weather much like the North face runs of the days prior. I climbed up 1000m of firm cramponing until I reached the col just below the summit. Here I joined back on the tourist route and followed big steps to the summit cross. Great views of the peaks and lines I had skied the previous days. I skied back down to the saddle and was relieved to see that the sun had passed by without touching the couloir. Dropping in to the steep icy upper section, I snapped a few photos before it got steep.

The night before, we stayed in a mountain hut owned by family friends. Their father is a good climber and was best friends with Andrea’s father. Exactly what he said was a bit lost in translation but while telling stories of their climbing adventures he mentioned that they didn’t have much for pictures. It was translated to me as something along the lines of when you are really scared, you don’t take pictures which is definitely something I can understand. I’m not usually brave enough to push myself often into terrain where I am truly too scared to take a photo but my camera stayed in my pack while I skied the steeper sections..
After skiing the King, I headed further back into the valley to visit another refuge and attempted to ski Diva Veza Peak before skiing out the valley to Andrea waiting with the car.
A recurring theme of my travels through the US and Europe this season has been how kind and helpful people have been. Friends and total strangers have reached out to help make this season a success by offering places to live, meals, tours of their favourite ski areas, and a multitude of other small and large favours. The ski community certainly is a friendly one.
Week Stats: 5 Training & 2 Race Days. 27 Hours. 130km Distance. 14,000m Ascent. One of my biggest training weeks ever.

Martin in one of several icy couloirs.

The whole group ready to ski out on our first tour.

Not a bad run to end the day on!

A nice scramble up the ridge to get here.

Cool views into another valley.

A little worried down climbing this when the snow pinched down tight between the rocks.

When the sun came out it got HOT!