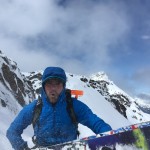 Though I still have a draft of my season racing wrap-up post sitting uncompleted, it seems more appropriate to give a little recap of the last two months of what I’ve been up to since getting home from Europe.

At the beginning of April when I first arrived, it was essentially still winter on the Coast (despite having full transitioned to summer in Chamonix). Whistler Blackcomb was going full tilt and we were able to ski right off the top of the Sea-to-Sky Gondola.

As I was getting settled, I had a few mellow days of lift-served skiing and some short tours. Spring traverse season was super late coming and my first bigger day out was a fairly casual one-day ski across the Garibaldi Neve traverse with Andrea, Will, and Cristina. We got an early start so Will could catch the sunrise over Garibaldi and made good time getting onto the Neve proper. That’s when it seemed like everyone and their mom had decided on the traverse that day and we navigated the glacier feeling almost like I hadn’t left Europe! 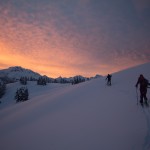 The girls just as the run rises.

Despite flagging energy, we made decent time across the lake and down the trail with minimal walking back to the car. The rolling terrain between Garibaldi Lake and the top of the Barrier is always frustrating long but Andrea trucked through it no problem.

With unsettled weather rather than good freeze-thaw cycles, I stuck to getting back into running and some smaller mountain trips in late April. Paul, Marcus and I explored Marcus’ stomping grounds behind Blackcomb doing the Blackcomb->Wedgemount Traverse. Sunny skies at Wedge Pass gave way to full blown blizzard conditions on the NE Arete and we couldn’t be bothered to climb any further so skied down to Wedgemount Lake and out the IPP road. 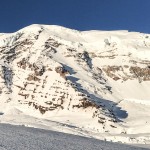 Nick and I took advantage of a slightly better weather day to check out Mt. Jimmy Jimmy, one that had been on my radar but never jumped out at me as a major objective. The hanging glacier that must be traversed to get to the summit was surprisingly crevassed with very steep sections that made us take our time passing though. The true summit was also a bit elusive and with low energy, it took a bit of cajoling from Nick to push on but we were rewarded with nice weather at the top.

More running and waiting on weather as May rolled around and finally extended high pressure started to build. Andrea and I headed out to do the Spearhead Traverse with our friends Carl and Kyle but early on, Andrea broke a ski tip. We were close enough to the start to bail back to Blackcomb but were a bit bummed to lose a beautiful weather day. We salvaged it with ice cream and a walk in Whistler Village. A few days later, Nick and I had been waiting for a chance to knock out the Tantalus Traverse on skis and finally pulled the trigger, ticking one of our big goals for the season. 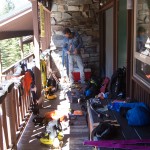 More running and waiting for weather brought us to a good weather window down in Washington. Colin Haley sent word that conditions on Tahoma were good and the Carbon River Entrance to Mt Rainier National Park was open for business. With all the snow this season, we were hoping that this would be our year to try Liberty Ridge fast. Colin offered up a place to stay near Crystal Mountain if he could join us on our attempt so we were stoked. We drove down, spent a day getting gear sorted and went for a short ski at Crystal and then decided on an early start.

Colin had talked to some friends from Colorado who were planning the route as well so we hoped they’d have put in a good bootpack. None of us were particularly stoked about our 3am alarms but we managed and got going at a reasonable clip. Colin set the pace running up the trail but Nick and I pulled ahead once we started skinning along. We met one group just waking up at St. Elmo’s pass and then cruised over to the base of the Carbon Glacier where we could see a few other teams heading for the route. We realized we probably should have slept in a bit more to let the other teams break trail but no time to stop now. 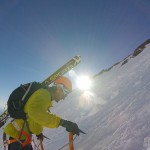 We passed the first party right at the shrund below Liberty Wall, they went on to snag the first ski descent of the Thermogenesis Couloir (very cool). Booting up the face was pretty quick until we caught the Coloradans just above Thumb Rock. Colin tried a few ‘strategic breaks’ to delay overtaking them but we kept a decent pace once we did though it was much more taxing. We turned around the Black Triangle onto the Willis side of the ridge and up to the shrund below Liberty Cap. By this point, we were really feeling the elevation but kept pushing. The shrund was the only spot Colin bothered taking out his ice tools and he gave Nick and I a quick belay. From here, it was easy cruising to Lib Cap and over to the summit – Columbia Crest. From there, it was pretty much straight down the Emmons Glacier towards Camp Schurman and then down the Inter-Glacier. Our skis were running super slow and the trail was a bit of a pain to ski down. We ran the last little bit and hit the trail head in 9hrs and 11min. We were back to Colin’s condo for lunch and then tried our best to stay awake driving home to Squamish.

A week later, I got a message asking if I had seen what Jason and Andy Dorais had just done. They took 2hrs off our time (though I’ll give it the caveat that they had even more excellent conditions) which is pretty rad. It seems our climb inspired a few groups that weekend but those guys were on a roll. I’m looking forward to another go at Liberty Ridge in the future now that we have the route a bit more dialled. Here’s hoping for another big winter! 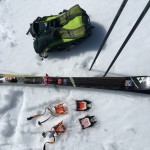 Liberty Ridge is definitely a unique climb. Even with the epic snow year we’ve had, the Carbon Glacier wasn’t trivial. We had to do a bit of wandering around crevasses. Once we got on the ridge though, the climbing was easy. Just super steep booting. I think we could have even avoided belaying over the upper shrund, we just didn’t want to backtrack. Skimo gear was definitely the way to go. I went a bit heavier duty than I should have in the interest of staying warm but it wasn’t warranted. Light is right.

Some gear notes: the new Petzl stuff is incredible. Their commitment to going as light and functional as possible is super cool. We used the Petzl Irvis Hybrid Crampons – they have steel front points (better for ice) but aluminum heels and dyneema linking that keeps them SUPER light compared to traditional ones. This is what I used (along with the Leopard for racing) in Chamonix as well. Colin loaned us his prototype Petzl Gully Ice Tools – a super light Ride-Quark-Sum’tec hybrid that will be awesome for ski mountaineering. For crevasses and the short step we belayed, we had Petzl Altitude Harnesses and a RAD Line. As usual, I had Fischer Alp Attack Skis mounted with Dynafit Low Tech Bindings. We carried quite a bit of food and water but I was glad to have it for a long warm day. 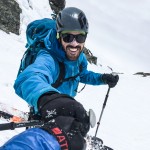 Paul is always stoked – skiing off the summit of Shuksan.

After Tahoma, I was a bit less motivated to get up early for ski missions but still managed a few more days with Nick exploring VanHorlick Creek and a double header weekend climbing Shuksan with Paul and Carl plus a few friends and Kulshan the next day with Paul and Gary. Conditions conspired against us and we didn’t climb our planned route either day but it was still fun to tick off the twofer. We also got to spectate (heckle) the racers of the first ever Mt. Baker Ultramarathon – something I think I’d like to do in the future!

One of my last ski days was a quick lap up the Stonecrop Face on Mount Slalok up on the Duffy Lake Road.

Now, it feels like the ski season is pretty much done. For at least a month since getting back, I was feeling the residual fatigue of my season in Europe and the desire to train just wasn’t there. Luckily, as the weather gets better and running trails are opening up, the desire is coming back! I’ve been building up my volume both scrambling around on the chief but also with some real running days. My first interval workout was definitely a shock to the system but also felt good! I’m looking forward to some running goals. 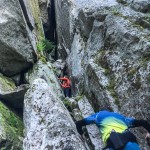 The last big thing I’ve been working on is an extension of my coaching business. We just launched Ridgeline Dream Trips and our first ever guided running trip will be back to Andorra and the Pyrenees Mountains this September. The purpose of these trips is to go mountain running in the coolest places in the world, get off the beaten path, and do it all with a cool group of people. Have a look and consider joining us this fall in Andorra!

Skiing the Emmons was a nice relief.

My view for the majority of Liberty Ridge.

Giving some instructions at our Capra/Ridgeline Coaching Seminar.

Rare moment of Nick taking a break on the Chief.

Beer o’clock on Kulshan – waiting for things to soften up.

About to do some bushwhacking…

Paul is always stoked – skiing off the summit of Shuksan.

The Girls skinning at Railroad Pass.

Andrea and I at Railroad Pass

Colin climbing through the final shrund/crevasse on Lib Ridge.

Tahoma and the White River.

Andrea getting a nice view of Black Tusk after bailing on the Spearhead.

The girls just as the run rises.

Will starting off on the Neve pre-dawn.

Tired on the Tantalus Traverse.

Nick skinning above the Gondola with Mt. Habrich in the background.

Marcus is stoked about conditions on Wedge.

Paul doing some scrambling behind Blackcomb.

Skinning near the top of the Garibaldi Neve.

April pow still in the trees.