The Squamish50 was the biggest event on my race calendar this year and it certainly lived up to the hype. Growing the event each year, Gary has managed to make it into a full weekend with two days of racing and a film festival.

Last year, I hosted a pasta party and a number of podium places were in attendance. This year, Will and I co-hosted a party. The group was equally talented and we had a nice evening with good food and a pretty relaxed attitude – only a little ribbing between competitors. 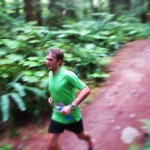 Nick is fast. His race was very fun to watch. He is hard to capture on camera and not be blurry.

The 50 mile race started at 5:30am on Saturday so Alexis (who came to town from Calgary to crew for me) and I headed over to Nexan Beach to watch the start. Something like 250 runners took off in the dark in a giant snaking column of headlamps (sadly not something my camera is capable of capturing). We headed back home for a few more hours of sleep after the whole group pounded away along the Squamish River. Once we got up for a second time, Kate (who would run the 50k on Sunday with me) and Andrea (crewing for Kate and generally taking care of the four of us) joined to head out and meet the racers at the Quest aid station.

We knew that Nick was battling it out with Mike Murphy and we were stoked to see them come into the AS together. From there, we zipped over to the Fools Gold trail to catch them again. Nick was looking great and had gapped Mike so we started to get pretty excited. We saw them come through the Farside AS and then chased Nick to the finish. It was awesome to see him win our local race and could not have been more well deserved. We stayed to see a few finishers but needed to leave pretty quickly to get home to eat and rest. 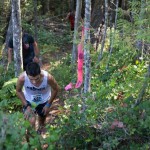 Suffering on the last climb of the course. (Solana Klassen Photo)

I was pretty inspired by Saturdays race so getting up Sunday wasn’t too hard. The start line was buzzing even though it was early and there were a bunch of the 50 mile racers out to cheer us on. Gary gave his speech, and we were off. Adam pushed hard from the start and Dean chased him close behind. I knew I had to take it easy to start so settled into 4th position behind local legend Ellie Greenwood.

Having Adam in the race changed my strategy a bit so I knew it would be good to hang back a bit off the start. When we hit the first real climb of the day – Made in the Shade – Ellie jumped out of the way and told me to go ahead. I picked up my race vest at Aid Station 1 and started up the Galactic climb hoping to reel in Dean though I had unknowingly passed him just before AS1. About halfway up the climb, I caught Adam and we talked about the heat. I realized that I shouldn’t be pushing myself too hard here so I eased back and let Adam pull away. At the top of the climb I got a split that I was about 25 seconds back of Adam. 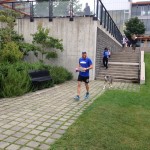 Gary was all over the place non-stop all weekend. I’ll not be surprised if he sleeps until September.

After Galactic, you descend the longest, most technical trail of the day to the Quest AS. I took it relatively easy to hopefully spare my legs some damage (last year I hammered and paid the price). When I rolled into Quest, there was a huge group cheering and I made a quick bottle switch. I was told the gap was 3:30 to Adam, wow that guy can descend fast!

The Climb trail and Angry Midget were slow but steady. I was starting to feel the distance. STP and Bonzai were hard. They are decent sized climbs on the back of the the course and Bonzai is fully exposed to the sun. Coming down Somewhere Over There, I realized I was in better shape than last year as this was about the point of onset of serious cramps. This year, I was tired but not cramping.

I ran into the Farside AS, dropped my vest, and ate a few snacks. More friends here to cheer me on. Just one hour to the finish but I still found myself walking small hills and easy sections of trails. I just couldn’t push my legs. The final climb up to the top of the Smoke Bluffs was bearable and I was glad when I got to the ‘all downhill from here’ point, blissfully unaware of the wolf hunting me from behind. 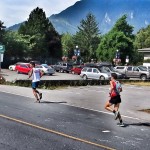 Opening up the tiniest of gaps on Ellie just before the finish.

Coming out onto the road with 2km of flat pavement left in the race, I initially thought I would be able to cruise to 2nd place and jog to the finish line. Nope – A few seconds down Loggers Lane, I did a double take when I looked back and saw Ellie chasing hard behind me. I picked up the pace and struggled to match her as she caught me. Running hard together now, we crossed under Hwy 99 and the small descent down a railroad grade crossing almost buckled my tired legs. Things started getting desperate. I was pretty focused on not getting third. As we came around into the final kilometre, there were a few obstacles to dodge around and we stayed neck and neck. With the chute in site, I pulled slightly ahead and opened the tiniest of gaps. A pair of 23km racers were in the chute doing the ‘cross-the-finish-line-holding-hands’ thing and I may have passed them a little aggressively as we closed out the sprint.

I just managed 2nd, three seconds ahead of Ellie. I never would have thought that our 5:20ish hour race would come down to a sprint finish but it sure was exciting. The looks on the faces of spectators as we charged in were pretty great though I can only imagine the look of horror on my own face when I realized that I was being caught. Man or woman chasing, didn’t matter. I really wanted that second place. 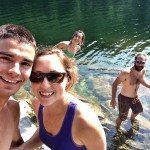 Brohm Lake post-race. (Alexis is not wearing a white shit)

The whole crew was at the finish to cheer and drag me over to the shade. We hung out for the rest of the afternoon to watch finishers and chat with friends. This was really actually the highlight of the day. I got to see almost all of our coaching clients finish and congratulate them – it was my first time actually meeting a few and it couldn’t have been better of an occasion! The atmosphere at the finish was awesome. I loaded up on Coke and M&Ms, then got a massage. After the awards ceremony and all our friends finished, we headed over to Brohm Lake for a post-race recovery swim.

All in all, it was a great weekend. Gary and his crew put on an awesome race – nothing more can be said about that. All the volunteers and spectators were wonderful. It was awesome to see friends and clients have great races. Kate did really well in her ultra-debut and it was fun to be a part of that. Andrea and Alexis did an amazing job taking care of both of us all weekend in a very selfless way. They were very patient despite lots of excitement, bossiness and moaning (in roughly that order).

I’m happy with my race and even finished 10 minutes faster than last year but I will say that my pacing could have been improved. I slowed significantly in the second half of the race. I got a split at one point that I was 10 min ahead of Ellie and she closed the gap big time later in the race. To run faster, it would also be useful to have the legs a bit more prepared for the muscle shredding descents and the overall speed needed to keep the pace high. My only regret for the race was that I should have stuck just behind Ellie for more of the race. Her ultra experience is pretty impressive and that meant a pretty smart pacing strategy.

Next up is a short visit to Minnesota to spend some time on skis and then back to Vancouver for the Grouse Grind race! Remember to check out this page to buy a photo and support my trip to the skimo World Cup circuit this winter!

Alexis and Will – both spent the weekend cheering and supporting. These guys are the best.

Nick in one of those rare moments of pain that the rest of us mortals enjoy.

Kate at the finish of her first ultra marathon!

Crossing the finish running faster than I think I ever have. (Megan Hicks Photo)

Having recovered from the sprint, I was able to chat with Gary.

One thought on “Squamish50 Race Recap”