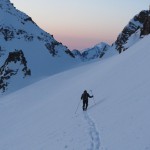 Sometimes, despite extensive planning, you end up spending a day doing something entirely unexpected. One of the main reasons I hesitate to plan any ski trip in advance is how things change. Partners want to come or bail, avalanche conditions change with the weather, and travel is fast or slow depending on new snow. All these things and more make it so I rarely know what my plans are until the night before. Sometimes plans even change on the drive out or mid-ski!

This week the weather cleared and things started to look good for getting further out into interesting places. Alexis, Bruno and I have been watching for a window for some time and plotting a trip. With over 100 planning emails, we had planned ourselves to death. As the window got closer, plans continued to change. We decided finally the night before on a long ski traverse in Garibaldi Park. We met at 10pm in North Van and were skinning up the Singing Pass trail in Whistler by midnight. 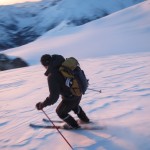 We hoped to get the section we were very familiar with done in the night and have daylight arrive just as we arrived at the difficulties of the route. With a full day to deal with the crux, we would then ski out another familiar trail the next evening in the dark. Skipping a night of sleep seemed a little silly at first but I figured I would be pretty amped up in the dark in the beginning and then once the sun came up and the skiing got serious I would be too focused to be tired.

Skiing over Singing Pass and past Fissile Mtn, I realized that I had a pretty serious blister on one heel. By the time we reached the Overlord-Fitzsimmons Col, my foot was in rough shape and I was dragging behind Bruno. Fresh snow also conspired to slow us down significantly. Shivering in the unanticipated, pre-dawn bitter cold, we quickly decided to pull the plug on our goal and head home by finishing the Spearhead back to Blackcomb Mtn. It would be my first South to North traverse and also my first time skiing from the village. The reverse Spearhead has a few decent glacier descents but some steep climbs (especially very early early on a cold morning) and an overall elevation gain conspire to make things difficult. 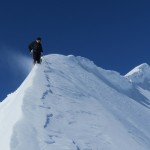 After descending into the sun on the Diavolo Glacier around 4am, we warmed up and continued on our way. We used a mix of ski crampons and bootpacking early in the morning and enjoyed settling in to a leisurely pace for the rest of the day.  As the morning wore on, each climb ran together, low angle glacier skinning. I closed my eyes and tried not to fall asleep on my skis.We took a side trip to the top of Tremor Mountain and skied fresh May powder on the North Face. Dropping down the Tremor glacier we saw two other skiers dropping into the Hourglass Couloir on Tremor. Sleep skiing punctuated by steep skiing… A short soup break and we were back on our way towards Pattison Mtn. where we skied powder over avalanche debris on the N. Face. 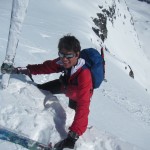 Another long glacier descent took us up to a brutal windless sauna of a bootpack onto Decker Shoulder. The final climb out of Decker Basin was the hard part of the day. I ran out of gas just 100 meters short of the Decker-Blackcomb Col – the gate leading us back down Blackcomb and out to the car. My low point of the day – in sight of the finish – I ate a bagel and rested my foot while Bruno napped in the sun and then we pressed on up to the Col and made the ski down to the car finishing off a 13.5 hour day.

Driving back to Vancouver was the second crux of the trip. Both of us could barely keep an eye open and we had to switch driving four times. Forced conversation and steady caffeine got me back to my car and on my way home to kits.

While we didn’t ski the route we had hoped, we did still manage to salvage an awesome day. We got a good view of the route and now have a pretty good idea of what is involved and the strategy. I also learned that a 12+ hour ski with limited sleep is a bigger commitment than I first anticipated. It really started to get me by noon the next day. Also, nutrition is absolutely essential in a long day like this. It is possible (though not optimal) to get away with eating very little during a trail run, skimo race, or even something like the Spearhead. Even though I thought I was eating enough and didn’t feel too hungry, I bonked twice – hard. Both times a bagel sandwich 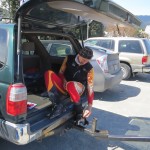 got me going again but it was a reminder that I was pushing myself hard. I have to rethink my plans for really long days in the mountains and probably spend some time next season training for this distance before going for a few of my goals.

Now after a night of sleep and catching up on calories, the day is a blur of fun powdery descents and bleary half asleep skinning kept interesting by good conversation with Bruno.

One thought on “Steep Skiing or Sleep Skiing?”