September is here, there is fresh snow in the mountains, and ski season feels closer than ever. This is a quick recap of my training over the summer: 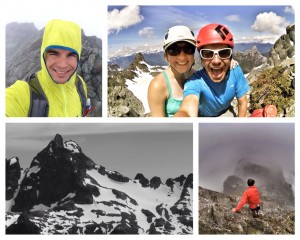 Clockwise from top-left: First Sky-Pilot summit of the season – solo. Climbing to the top with Andrea. Adam Campbell descends into the fog. The regular route seen from Habrich Ridge.

For the last few years, the Chief has been my go-to training spot for getting in quick vertical runs. The new Sea to Sky Gondola has opened up new possibilities both below and above it’s top-station. The new climb trail is a quick steep hike to the top that follows under the cut line of the gondola. The summit of Sky Pilot, a previously difficult to access peak, is now a quick morning run after a ride up the Gondola: 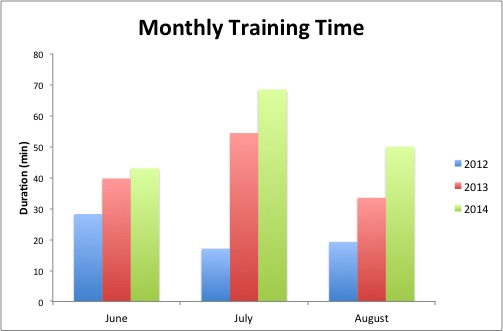 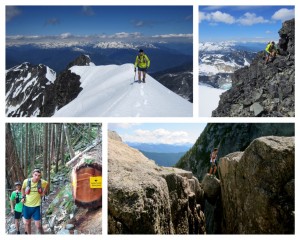 I got out for quite a few other fun adventure runs. Nick and I had an awesome day in the Wedgemount area. We tried to tag all five peaks that surround Wedgemount Lake but ran out of steam after three. We couldn’t stomach the thought of the endless scree that needed to be covered to tag Rethel and Parkhurst Peaks. As far as I know, the entire group has not been summited in a day and is waiting for a ‘first’.

We also snagged a handful of other summits this summer running with Gary Robbins and Jim Sanford. Despite a pretty busy work and racing schedule, Gary is usually pretty quick to say yes to an adventure running in the mountains. Jim joined us to run a horseshoe around the Shannon Creek Headwaters along a trail that Will McKechnie, Colin Haley, and I  (along with others) have been working on opening up.

I only did two trail races. The Kusaam Klimb on Vancouver Island, and the Squamish 50 – 50k ultra here in town. I placed second in each, first to Nick at Kusaam, then to Adam in Squamish. Certainly not bad company on the podium. I would highly recommend the Kusaam Klimb to anyone looking for an interesting and very different type of race. First, the course is essentially one giant climb (up Mt Kusaam) and then descent back to the starting line. The climb follows a steep trail nearly to the summit and then joins endless logging roads for the jarring descent back into town. There is not much for rolling hills so you can pretty much destroy your climbing muscles on the up and then switch to downhill muscles for the descent. The race has an unusual small town vibe but brings a big crowd of runners looking to finish fast, or just finish. 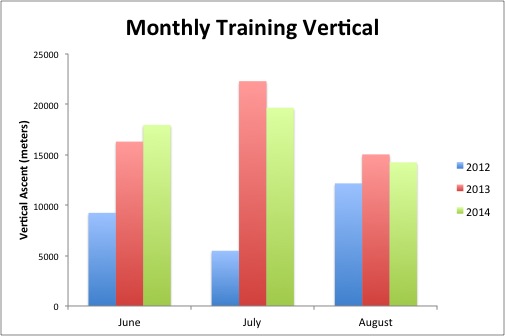 My vertical ascent was slightly less in 2014, despite more hours indicating potentially less time on steeps and more on flatter trail runs but more likely some longer, slow days in the mountain. I averaged 17,800 meters per month this year compared to 17,900m per month in 2013.

Now that fall is on it’s way back in, I have my eyes on two more trail races. First the Grouse Grind ascent next weekend and then in late September, the Rubble Creek Classic. Both of these races suit my strength so I am looking forward to seeing how they go. Other than that, fall training will be focused on racking up vertical, improving my lactate threshold, and roller skiing to prep for ski season. I can’t wait!

Squamish 50 Photos. Alexis and Will (Left) were the big cheer squad on the course both days. The SQ50 photographer took some cool photos at the race.