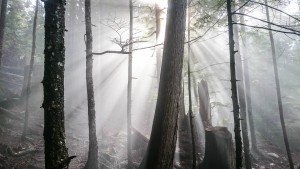 Sun, trees, and fog on the S2SG Evac Route

This is the 2016 edition of my favourite trail runs in Squamish. I don’t have much for pictures just yet but check out the descriptions and maps! One of the most essential pieces of gear for running in Squamish is the Squamish Trail Map App – download it from Trailmapps.com right now! It’s the best $10 you will spend for an app ever, I promise! Carry it with you on your runs and use the built in GPS feature to explore new trails and get back on track when you get lost. So, enjoy my favourite places to run and train in Squamish, in no particular order.

I live in Hospital Hill so this is one of my favourite short, easy runs though it can easily be extended out to Quest for a longer, rolling run. I like starting at the end of Northridge Drive on the hill but it is just as easy to park in the Smoke Bluff Parking Lot near the Squamish Adventure Centre. Head up the stairs of the Smoke Bluff Loop and then turn East on the Summers Eve trail which traverses above the new Crumpet Woods neighbourhood. Once you reach the power line cut, you have more options but I usually take the Farside trail (a nice, well buffed option) that leads eventually to the Furtherside trail and then to the Mamquam Service Road. Here you have the option of returning through the trails or taking a side trail off the road behind the Valleycliffe Neighbourhood to return to Hospital Hill. 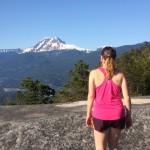 Andrea on the Chief with Garibaldi in the background

The three peaks of the Chief are one of my favourite places to run and scramble in Squamish. For my standard route, I park at the Apron Parking Lot off Hwy 99 and then warmup on the Mamquam FSR. At approximately 2.5km, pass a gravel pit and a trail heads into the woods on the far side. This climbs steeply up to the Squaw Climbing Area which can then be turned around on the South side and continuing up to the Chief-Squaw Col. An option to turn left here allows for an easy ascent of the Squaw. Turning right and following signs leads towards ‘3rd Peak’. Here the trail becomes less well defined and takes several detours to the East side of the ridge crest but eventually climbs up onto the 3rd Peak (if you find yourself wrapping around the back side of the Chief, you may have missed a turn but it will eventually connect back to the standard trail up the Chief). From the top of the 3rd Peak, follow the marked, direct trail over the 2nd and 1st Peaks and descend the standard trail down the 1st Peak.

The Four Lakes Trail in Alice Lake Provincial Park is a nice easy option with rolling hills. I like to add on a bit more by starting at Perth Drive, near Quest. Park at the end of the road and head into Lumberjack Trail. This spits you out near the bottom of Jack’s Trail, which then climbs up towards Alice Lake. You can go around Alice Lake either direction but on the other side, you must find your way through the campground to the entrance to the Four Lakes Trail. Follow this to Edith Lake and instead of going right to continue back to Alice, stay straight and head down Tracks From Hell, Mashiter and turn onto Rollercoaster. This is a final, aptly named descent to the car! The loop can be make even bigger by taking a left at the Fawn Lake intersection and adding the Bob MacIntosh Memorial Trail, Dead End Loop, and Rob and Cliff’s Corners. 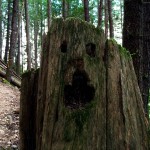 Survival of the Fittest Race Course

The Survival of the Fittest is a popular trail race in Squamish and well described on the Coast Mountain Trail Series website. The course uses some of the best trails in the Quest area including the Legacy Climb Trail, Angry Midget, and Hoods in the Woods. Many variations on the course exist for those looking to add time and the area deserves exploration! Park at gravel parking lot at the entrance to the Legacy Trail beyond Quest just after where Garibaldi Park road turns from pavement to gravel.

The Dump Trails and Wonderland are one of my favourite short, easy trails in Squamish. You have very minimal elevation gain/loss and the trails are soft and loamy. Good for tired legs or the first few runs coming back from a break. Take Hwy 99 North through town and turn left on Depot Road. Park immediately after the intersection on the right side. Starting from the corner is a gravel path heading north that turns into the woods, a trail called Sweet Judy. Any combination of trails can be used but the goal is to head North towards the intersection between Hwy 99 and Squamish Valley Road. I usually use Two Cycle Trail and Larry’s Loop. Once you arrive at the intersection, cross Hwy 99 and follow Alice Lake Road East just a minute or two until you see the entrance to the Wonderland Trail on your right. Wonderland tracks back South along the highway and eventually returns you to your car at Depot Road. This route can be extended at the North end by adding on the White Rabbit Trail. A larger extension North involves a short stretch on the highway to reach the Cheshire Cat trail. Climb Cheshire Cat until you reach Cat Lake. Go to the far south end of the Cat Lake Campground and then descend Section 57 back to the highway. This is an excellent running descent. 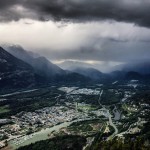 Storm rolling down the Squamish Valley

The Sea to Sky Gondola Evac Trail is short but extremely steep. There are no groomed trails and staircases like the Grouse Grind and it is considerably more elevation gain. Expect slippery logs and roots, some scrambling on rock and a bit of pulling on ropes. Start at the bottom station of the gondola and follow the first few hundred meters of the Sea to Summit Trail. When you reach an intersection (Left to Sea to Summit, right to Shannon Falls), go straight into the forrest and pick up a poorly defined path marked by a No Hiking sign. This quickly becomes more defined and starts weaving it’s way up through cliff bands below the gondola. At approximately 1/3 of the way through the climb, you intersect a major trail with the gondola directly overhead. This is again the Sea to Summit Trail. Continue directly uphill and scramble a short rock step with a rope. There are several branch trails that primarily access the towers – don’t climb the towers. With ~1/3 of the way to go, you return to the Sea to Summit/Wrinkle Rock Trail for the last few km to the Gondola top station. For those interested in fastest known times, start your watch at the trail post where you enter the woods and stop it at the trail sign post at when you emerge at the top station! Fast times are regularly found on the Strava Segment page. A gondola download pass is ~$10 and is recommended over descending the trail. If you do choose to descend, the Sea to Summit is preferable as a descent to the Evac Route.