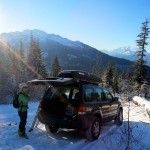 A bit of snow up high and no snow in the valley means that logging roads, normally inaccessible with a winter snowpack, allow access to high places that usually go unvisited. Tricouni Peak, just North of Squamish is one such area. Tricouni gets a bit of attention in the summer as a scramble but is typically reserved for sledders in the winter.

Access is usually from the Squamish Valley Road but it can also be approached from spurs off the Roe Creek and Chance Creek roads. 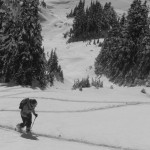 Andrea and I decided to scope it out after a few days of good weather. We drove up to Tricouni Meadows, the normal summer approach, and skied across the lakes to Tricouni Bowl. We didn’t have enough time to head to the summit but got in some great turns on the South facing slopes of the bowl. Seeing all the terrain available planted the seed in my head so I made plans to come back shortly. 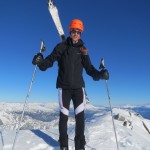 A few days later I met up with Carl, a student at Quest keen on skimo and we headed back up to the meadows to summit Tricouni Peak. No new snow and a lot of wind has packed the surface into a hard breakable crust. We made quick time through the meadows and up towards the peak. After a false start scrambling up the ridge, we found the right way to the top. Skiing from just below the summit, we dropped into the upper bowl and then into a tight chute to the lower bowl and meadows below. 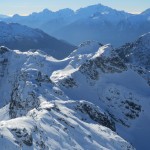 Our couloir on the far left at the end of the S. Ridge of Tricouni

Carl and I spotted an interesting looking line from the summit dropping off the South Ridge of Tricouni. The North facing couloir drops to a small lake with some evidence of snowmobile tracks. With one more day of decent weather, Brad, Gary, and I set our sights on a quick, half-day mission to tag the couloir. We approached from Chance Creek, almost driving to the end of the road. The skin to the base of the couloir was under an hour and we strapped on crampons for the bootpack up the variable windslab. We scooted up quickly and transitioned for a fun ski down despite the disappointing snow conditions.

New snow in the forecast makes it pretty unlikely that the easy access to the alpine will last much longer but I am definitely looking forward to getting back into the area.

Andrea almost at the top.

Not a good way to start a tour…

Carl climbing into the bowl.

Our couloir was on the far left at the end of the S. Ridge of Tricouni

Scrambling to the top of Tricouni

Skis on – not as steep as it looks

A bit of rock dodging. Our best “dry skiing” impression.

Skiing windslab in the upper bowl.

Coming out of the choke

Brad and Gary transition to bootpack

Brad approaching the choke in the couloir

Brad dropping down to the choke