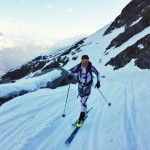 Lars Erik cruising across the Bossons Glacier just after jumping off the Midi.

My next few posts will unfortunately be a bit out of order as inspiration is coming in spurts to tackle the second half of my Europe trip. Near the end of my time in Chamonix I was preparing for the team race Mezzalama. Unfortunately the race was postponed due to the weather. This did however give us the chance to get out for an awesome adventure on Mont Blanc.
One of my partners, Lars Erik was hoping to milk every possible chance of acclimatization before Mezzalama so, with Paul, we decided to ski into the Argentiere hut for a night at altitude. Just before leaving cell service for the night as we skinned up the glacier, Lars checked his phone one last time and found messages from Emelie and Nils that the race had been officially postponed a week. Immediately plans were changed. We sat down on the spot on the glacier, first disappointed and not wanted to believe the race was postponed and then second, decided what to do next. Lars was unable to stay for the following weekend so that meant he was no longer able to race with Pascal and I. Immediately our attention turned towards Mont Blanc. It had been in the back of my mind for the trip but conditions and timing had conspired against me thus far. Now conditions were perfect and I had a strong partner to go for it with. 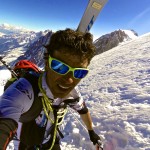 Climbing the Gouter Ridge with the Aiguille d. Midi behind.

We hauled back down the glacier and headed into Chamonix to find out more about the route. The High Mountain Office (OHM) is a good source of info. We asked about conditions on the route for the next day and the women behind the counter said it would be a perfect day and the route is in great shape but we were too late to get to the Grand Mulet hut to spend the night (as most parties do). I hesitated for a moment and then explained that we planned to do it quickly from the mid station of the gondola. I hesitated because in the US – say at Mt. Rainier – explaining to a ranger that you want to do something of this size in one push usually leads to a safety lecture. The OHM woman just said, ‘oh – so you guys are fast!?’ and then gave us all the details on the minutiae of the route and we were on our way.

In the summer, the regular route up Mont Blanc is the Gouter. In winter, when it is possible to ski tour, the regular route is the Grand Mulets. We opted to take the first bin up the Aiguille d. Midi, arriving at the mid-station at about 8:15am. From the mid-station most people generally take an afternoon to ski up to the Grand Mulet hut. Here they spend a night and then wake early for an attempt on the summit in the morning. We headed out from the mid-station and passed right by the hut on our way to the ridge up the Gouter dome. The ridge is used to bypass a section of the route that is heavily threatened by falling seracs. In doing so, we had to pass by a gigantic crevasse. The crevasse was easily visible from town and looked like a giant mouth gaping open to gobble up skiers. Passing the crevasse turned out to be uneventful, we only noticed it because we had to detour off the ridge to get around it. Reaching the flat sections above the ridge and approaching the Vallot hut, we realized that we were quite close. We could see the top station of the Midi far below us and Chamonix below that. Here the wind was stronger and the air temperatures were cold so we stopped briefly to put on more clothing. 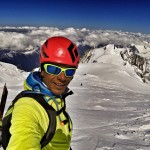 Partway down the North Face. Lars Erik skiing in the background.

Even at 4000m both Lars Erik and I felt quite strong. Only as we approached the summit at 4800m did we start to slow slightly to breathe hard. Neither of us had headaches or upset stomaches and were quite surprised at how well we were fairing. The final ridge to the summit was uneventful but exciting at the same time. It’s not terribly exposed and quite wide so the going was easy but the views off either side were spectacular. We arrived at the summit and took our time eating, taking photos, and getting ready to ski down. The wind even subsided a bit and we were able to enjoy our time on the top. Lots of tracks led down the North Face so we followed the trail and headed down among seracs and over big crevasses. There were a few slots that required little jumps but for the most part it was easy skiing in boot top powder. We blew passed the hut and made our way back onto the lower Bossons Glacier. In the morning, crossing the Bossons was easy on firm frozen snow. Now with the sun shining strong, the surface was soft and we were wary of some of the more sketchy bridges. We made quick time however and got back to the Midi mid-station with about 6.5hrs on our watch and plenty of time for a drink at the snack shack before catching a ride back to town. 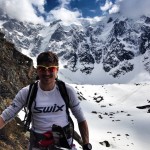 Lars Erik booting up the last few steps to the Midi mid-station at the end of the day.

In hindsight, the day was much less strenuous than we expected and took much less time than we planned. We both regretted slightly not doing the most pure ascent and hiking from the valley but that would have been more logistically challenging and would have taken a lot out of us just a week before Mezzalama.

Both Lars Erik and I were pretty satisfied with our day on Mont Blanc. It is an iconic peak and the altitude presents a real challenge for light-and-fast style ascents. It is certainly a bucket list tick that I will remember for a long time.
Stats:
Gear:

Climbing along the Gouter ridge with the big mouth crevasse visible from Chamonix above us.

Passing by the mouth crevasse.

Looking across at the Midi. Paul and I skied the right hand couloir from the Cosmiques Hut a few days earlier.

Almost at the summit of Mt. Blanc following the sidewalk sized ridge.

Looking back up the North Face at our tracks (and those of a few others) off the summit of Mt. Blanc.