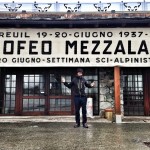 Time to get excited!

The Trofeo Mezzalama or ‘Glacier Marathon’ was the final event in this season’s Grande Course series of races. Three races of great prestige, always longer in length and duration than a standard World Cup, and open to hundreds or thousands of entrants. After racing the Pierra Menta with Nick and performing beyond our expectations. I was quite excited because, while Nick had headed home and wouldn’t be racing, my team of three included Pascal Egli, a Swiss skier who had spent the previous season in Canada giving us all a run for our money, and Lars Erik Skjverheim, a Norwegian who had become a friend throughout the season and routinely skied to high finish places. I knew we had a good shot at a decent placing and even more important, both my teammates were cool dudes and we would have a blast. 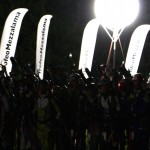 Unfortunately, due to crummy weather in Italy and the fact that the race takes place almost entirely in the alpine, the race was postponed a week. This meant that Lars Erik, a firefighter, had to return to Norway to work (though this was not all bad as instead of racing, we climbed and skied Mt. Blanc – read my report HERE). We were down a teammate and had a week to find someone. I reached out immediately to Andrea’s cousin Matus who I skied with in Slovakia. He had just started a new job however and had to pass but did suggest his girlfriend’s brother Peter. I had met Peter in Slovakia as well and I knew that even if he was not as strong as Lars Erik, he was a good guy and would definitely give everything he had. He also had raced the Adamello Ski Raid a few weeks earlier and was well acclimatized to altitude. I was stoked when he said he could race and would drive down to Italy to meet us (a long way!). 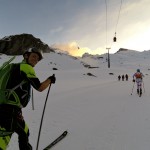 Pascal leading us out of Gressoney early in the morning.

With our team back to full strength, we met Pascal in Chamonix and then drove the rental car to Gressoney in Italy’s Aosta Valley – just through the tunnel and a few hours from Chamonix. We checked in at the race HQ to pick up our package under spitting rain. Rumours were floating of a 50/50 chance that the race would go off. I was praying had that it would happen as even one more day postponement would mean I would miss it (my flight home left the next day) and our team would be screwed. The course description was vague and mostly in Italian so aside from a few key facts pointed out by a friend, I just accepted that we would have to just take things in stride. It was a recurring theme that at race briefings, with each translation of the presentation, it would get shorter. The Italian speaker would go on for a few minutes animatedly. Then in French, it would be a little shorter and more direct but still roughly the same amount of info. Then in English finally, it would be distilled to a single sentence. I always felt like we were missing something…

After the meeting, we headed back to our hotel (the race takes up the entire village and every hotel was full of athletes) for an amazing dinner. I can say unequivocally that the Italian races had the best food of any that I attended. We tried our best to get to bed early but we were all excited about the next morning, despite a 3:00am wakeup to make the 5:00am start. Meanwhile, Paul was off at the Press hotel on assignment as a skintrack.com correspondent eating a fancy meal and unlimited wine with the rest of the journalists and race bigwigs.

3:00am rolled around just as quickly as you can imagine and we headed to the hotel restaurant for a big breakfast, eating as much as we could to fuel up for the big day. We geared up and I hurried everyone out of the room and off to the start only to find it had been delayed by 45min. We had time for a last minute bathroom trip and then back to the start line. The good news is that it was happening!

Somehow we were ranked in the top 15 teams and so got priority seeding at the start line. We ended up right at the front with another 800 people behind us crowded in the main street of Gressoney. We all started with our skis on our backpacks running down the cobble streets in our ski boots. The gun went off and, despite the race taking 6+hours, the entire field took off at a sprint! We tried not to go too hard but balanced that with a desire not to lose too many places. On skis after a few minutes we were in a good position. I pulled out the tow rope and Peter clipped in. Pascal led the way and Peter and I followed with our heads down. A few spectators along the course would see my race suit and cheer ‘Go USA’, Pascal would counter with ‘and Swiss and Slovak!’. 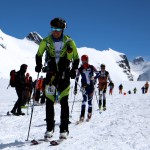 Pascal leads us into the final transition.

The first part of the race took us up the piste of the ski resort out of Gressoney. It was warm and the sky was clear. We were feeling good and even passed a few teams. Then we came into the high alpine via the first big bootpack. Passing the first hut of the race, volunteers instructed us to take out our rope and tie together as the majority of the rest of the race would be on glaciers. I had devised a super quick and efficient system for us to whip out the rope and clip in with carabiners but the guides told us that we had to actually tie in with knots – crap – lost in translation I guess. So we lost a few minutes here fumbling with our rope. Even worse, by the time we were tied in and moving again, we had gotten cold. 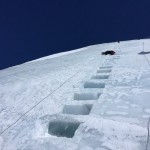 The Italian way of cutting steps!

Up on the glacier, the temperatures were lower and the wind was whipping. After a few minutes we all realized we were freezing so stopped to put on wind pants, jackets, and heavy gloves! Comfortable and moving again, we cruised along, the climbs and bootpacks were big and long. Several places we avoided crevasses on narrow snowbridges or on ladders. A descent off one of the high points of the race was blasted by wind down to bare blue glacier ice. The race organization had cut steps in the slope with a chainsaw so we could pass through. Midway through the race, we were racing by ourselves with no other teams close ahead or behind. Just as I was starting to run out of steam, we rounded a corner and started the final short climb. A huge peak came into view and I hollered to Pascal, asking if it was the Matterhorn. He said ‘Yes!’ and with a bit of renewed energy, we charged up to the final transition. Here we quickly untied from the rope and I coiled it over my shoulder. We started the looong descent to Cervinia on first glacial slopes, and then ski runs that gradually turned to sloppy spring slush. We cruised into the finish just before the leaders received their flowers. 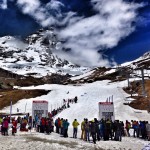 Finish line below the Matterhorn!

The atmosphere in Cervinia was amazing with racers finishing continually and a big party in the streets. The whole time the Matterhorn was coming in and out of the clouds providing an imposing ambience. We were in a bit of a haze after the long race and all the time in the sun and it was a relief to change into dry clothes and hit the food tent.

Speedy Italians in the lead.

Roped together on the final descent into Cervinia.