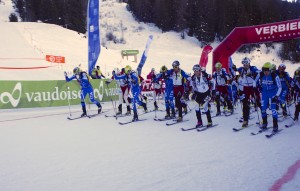 While I knew all along that the vertical race would be my best shot to place well in the Championships, the teams race was certainly what I was looking forward to the most. The teams event best embodies the spirit of ski mountaineering with two athletes racing together, never skiing far apart and sometimes connected by a rope.

We spent three days prior to the race skiing around various parts of the course to familiarize ourselves. It was a big race, with just under 2300 meters of vertical gain to cover. My partner was Scott Simmons – one of the veteran Team USA racers. Scott qualified ahead of me in the CO and WY races so I was excited to ski with him. 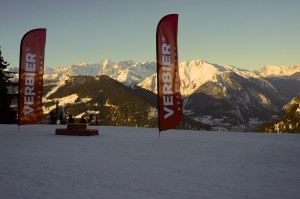 The start was early enough and shaded by the big peaks surrounding us that it was quite cold but we knew from previous days that when the sun made it’s appearance, it would be strong so I opted for thin clothing under my ski suit and plenty of extra fluid and fuel.

We found a good spot on the start line (I was paying a bit more attention this time) and went hard off the line during the frantic start. We settled into a good pace and rolled through the first two climbs and descents feeling pretty good, right alongside the second USA  team of John Gaston and Max Taam.

With more than half the race ahead of us and all of it ascending various routes on 3003m Mt. Gele we tried to keep the pace up and ski the descents well. Scott is a better skier than I am and would dive ahead to lead me down the descents – a tactic that worked well. 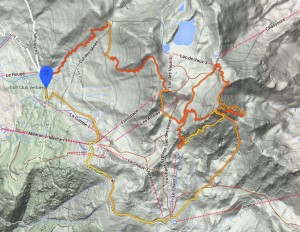 John and Max, along with a Norwegian team, pulled away from us on the second to last descent. On the final ascent, the sun came out strong and I could feel my body instantly react to the dramatic change in temperature. Luckily, we were firmly entrenched in our position, with no one near us either in front or behind. The climb was a bit of a slog before we headed down the final descent to Verbier.

We finished in 19th place – respectable for sure. Jason Dorias and Tom Goth were the top USA team in 11th place. Nick raced with Travis Brown (CAN) and they placed just ahead of Team USA3 and Kate also had a good day racing with Martha Burly (CAN). 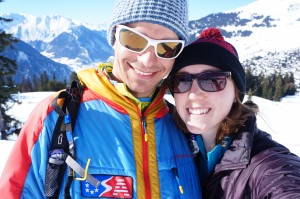 I have a pretty awesome cheerleader who has doubled as driver, cook, gear assistant, and a bunch of other stuff. Pretty lucky!

After the teams race, we packed up our house. The next day was the Team Relays though Andrea and I headed out to finally have a chance to just go for a tour together. That evening was the closing ceremony and party which was definitely a blast. From Verbier, we drove to Zurich and changed to a train that took us to Vienna. Then another train to Bratislava, Slovakia where Andrea’s relatives took us to Poprad, near the High Tatra Mountains. We will be here touring for the next two weeks and competing in a race or two. After that, back to the alps for another World Cup and the Pierra Menta!