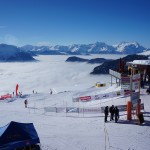 Amazing view from the finish area of the vertical race. (Andrea’s Photo)

I qualified to race two of three possible races at the World Championships – the Vertical and the Teams. The vertical race is pretty far from actual ski mountaineering in it’s true sense however it is the race I was most likely to perform well in. Racers ascend moderate slopes (think blue groomed run) from start to finish without descents or transitions. The Verbier course is one of the biggest on the circuit with around 850 meters of elevation gain for the men. The race began below the main village and climbed onto the streets of Verbier, right through the centre of town. Once out of town, we turned up the ski runs until reaching the high gondola station and the finish line. 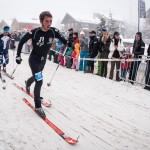 Skiing through the centre of Verbier. (ISMF Photo)

With instructions given in French and broken English, race starts are always a bit chaotic. I wasn’t aware of how they would seed us on the start line and wasn’t really paying attention when the corral was opened so ended up near the back with a few of the other North Americans. The gun went off and the field took off running the flat first stretch of the course. I was near the back and tried my best to keep my pace high and start making up ground. I moved up to the middle of the field pretty quickly. 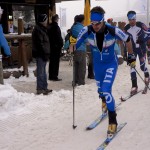 More skiing in the streets of Verbier. (Andrea’s Photo)

As we entered Verbier, it was hard not to get excited and I certainly pushed a little harder than I probably should have. The organizers filled the street with snow and fenced off a track for the skiers. The fences were lined with spectators and their energy was easy to feed off. Turing back onto the quiet of the ski run, the difficulty started to set in and I fell back a little bit. I knew the margin for places was small. A minute on the course could mean 10 places. 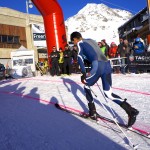 Just about to finish! (Andrea’s Photo)

As we finished the switchbacks in the trees, Team USA teammate Rory came alongside. Nick was right behind us and we pushed along together until emerging at the tree line. I pushed hard to stay ahead and knew I would be okay when I hit the final headwall. Here again the spectators lined the course screaming and I pushed hard to the finish with Rory and Nick hot on my ski tails. 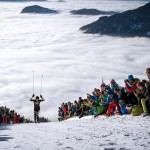 Killian Jornet skiing out of the clouds to become Vertical Champion of the World! (ISMF Photo)

I placed 39th and finished in just over 45 minutes. Despite being the top placed North American man, I was hoping to ski a slightly better race. It was hard to keep the pace under control from the start and I paid the price. It was hot so I did make a good decision in dressing lightly as well as taking a small flask with Hammer Gel and water.

Next up is the Teams race on Wednesday. Today I got to watch everyone race the individual event which was fun but I do wish I was in there mixing it up. I am pretty excited for the Teams so tomorrow we will take a look at the course and then rest up!
LINKS:
Results
Skintrack.com Race Report
ISMF Photo Page

HR and Altitude profile from the Vertical Race. 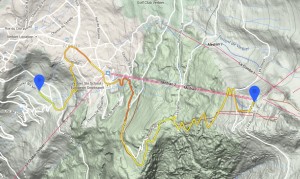 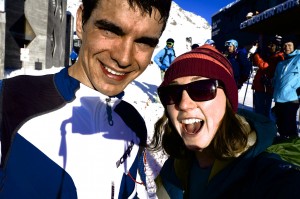