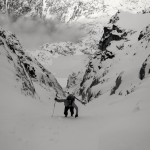 Brad booting up the North Couloir.

Rarely in BC do I find myself wishing for rain but the high pressure living over Squamish throughout the fall has made it a reality. While I attended a conference in Halifax, (Cold, windy, with good lobster) all my wishing for snow seemed to start paying off. Seeing photos of my friends out playing in the snow made the East Coast that much more difficult but soon enough I was back on a plane, snow bound.

Getting back, I was itching to get out but had to wait two days with classes at school to take care of. Finally, I managed to escape the city and head into the mountains with Brad. We had our eyes on the N. Couloir of Rethel Mountain in Whistler with the hopes that it would collect sufficient snow for early season skiing. We hiked up to the lake and post-holed around to the base of the couloir and partly up the fan before there was sufficient snow to put skis on and start skinning.

The couloir is steeper than it looks from below and guarded by a big cornice. We didn’t want to deal with climbing around it so switched to skis, hiding underneath. On the descent, the upper 1/3 was hardpacked snow and ice. The middle 1/3 was decent skiing with variable conditions. The bottom 1/3 was rocky as we picked our way down the fan. With his new skis, Brad elected to walk the bottom section, while I was more concerned about the wellbeing of my boots than my skis and chose to ski. We arrived at the partially frozen lake and after a short argument about the thickness of ice in the middle versus the edge, we opted to circumvent the horrible boulder field by skiing (carefully) on the ice. 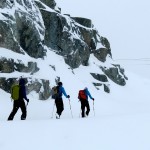 Skinning up the Horstman Glacier.

The entire Squamish skimo crew gathered Sunday for an exploratory ski up towards the Blackcomb Glacier. We took a few wrong turns and found ourselves on the Horstman but still managed to get some decent skiing. It was probably the least tracked out I will ever get to ski those runs! 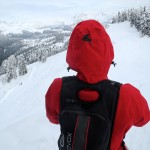 Contemplating the first run of the season.

We lucked out skinning from the car and only walking the last 5 min of the descent. Unfortunately, one of the group took a small fall, twisting an ankle and illustrating the dangers of early season hazards like hidden rocks or glacier ice, and our summer cobwebs from no skiing.

I rounded out the weekend with an easy tour and powder laps off of Paul’s Ridge. We skied up expecting bad snow and core shots but found a supportive rain crust with powder on top that made for fun skiing on the North slopes. The ski out was reasonable with the trail well packed and rocks reasonably obvious.

Now that the initial shock of skiing has worn off, it is probably best to wait for one or two more storms to fill things in before looking for anything more ambitious to ski. In the mean time, I will be hitting the gym and getting in a few runs. 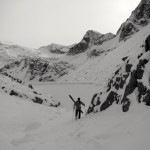 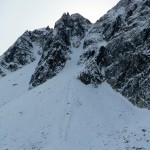 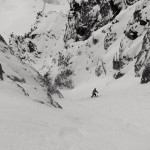 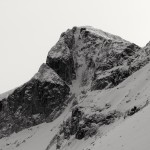 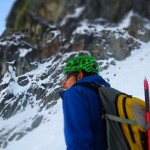 Brad looking cool after a lot of walking and a bit of skiing. 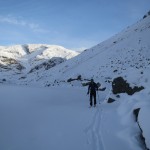 Trying to avoid open water on the ice at Wedgemount Lake. 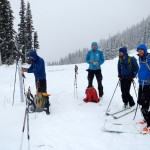 The Squamish crew taking a lunch on Blackcomb. Brad, Stano, Nick, and Gary. 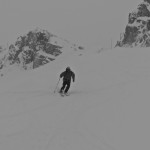 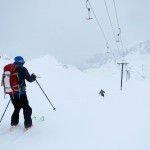 Untracked powder on the Horstman Glacier. 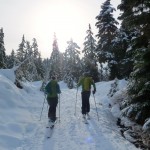 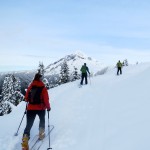 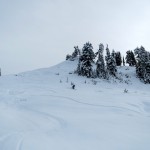