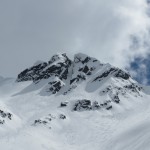 Duke Mtn. is a slightly more obscure peak off the Duffy Lake Road. Only obscure because it is not part of the Matier group, Duke features some awesome steep lines that recently caught my attention. I managed to talk Stano into checking it out (despite his Cayoosh obsession) and Pascal agreed to tag along as well. We had a forecast of a good overnight crust, stability on the N. aspects, and the possibility of bad weather arriving at the end of the day so we decided to go for it!

We bypassed the very flat approach for the more skiable, Ceriese Creek option. We made good time to the Matier-Vantage Col and after starting a short (5min) skin up Vantage Shoulder, we ripped skins and made a shooting traverse across the melt-frozen South side of Vantage that deposited us perfectly at the Duke-Vantage Col. Skins on again and up the NW Ridge of Duke. We arrived at the cliff band near the top of the ridge that we head heard required some tricky rock scrambling. The snowpack was deep enough that we were able to boot up without issue – crampons not necessary. 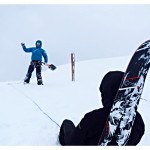 Arriving at the entrance to the couloir, we were shocked with the size of the cornice. The couloir is tight with steep walls and we knew to expect a cornice but it was really huge! We were prepared for a battle with it though and started by setting up an anchor so Pascal could scout the extent of the difficulties. He stomped around trying to get it to fall with no luck. Determining that we would have to rappel, he dug us a ramp into the top part and we set to work building our rap anchor. 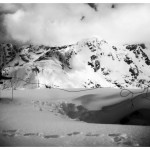 We buried a piece of 2×4 wood as a deadman and extended it with a sling to our 30m half rope and tag line and did rock-paper-scissors to see what order we would go in. Stano was first to test the slope. Pascal was second and I was the loser who had to rap third and pull the rope. Once Stano and Pascal were out of the way, I slid in. I did my best to calmly transition to skis and got ready to pull the rope but it was completely stuck. The knot had sawed into the cornice lip and didn’t budge with all my weight. After 5min of yanking, I gave up and skied down to the boys. 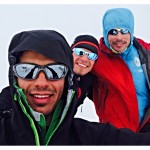 After a little celebration, we put skins back on and headed back up Duke Ridge. We hoped to tag the N. Glacier but had to take the time to retrieve our stuck rope from the cornice. Now, feeling the effects of the day, we skied down the ridge and then up to the summit of Vantage where we ripped skins and dropped into the North Face! We had more great turns at the top but flat light prevented us from opening things up. Skiing out Ceriese Creek was pleasant and we were back at the car without too much fuss. 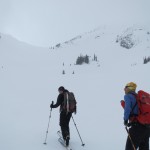 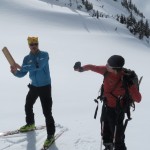 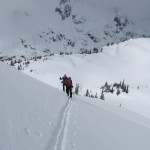 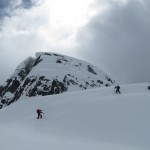 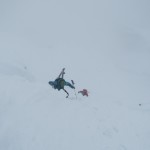 We found the rocky section to be quite smooth sailing. 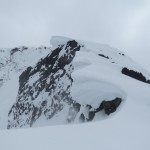 Big cornices all along the ridge. 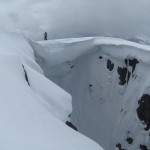 Belaying out to check the cornice. 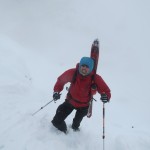 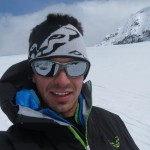 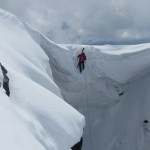 About to hang free… 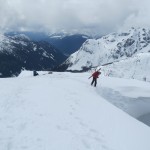 Stano looking over the edge. 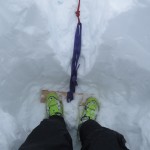 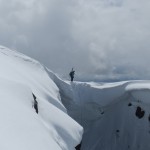 Decision time. Do I really want to do this? 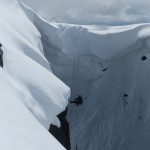 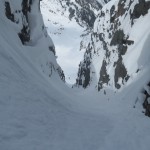 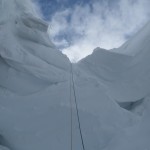 Looking back up at the cornice. 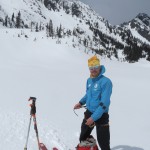 Stoked to be out of the cornice fall line. 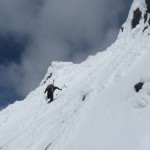 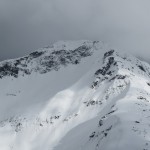 Looking back at Duke Peak and the couloir. 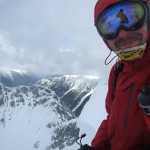 Stano is always good for a smile. 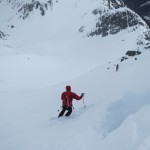