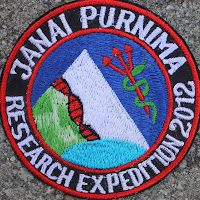 So far my updates have just been about events of the trip but now that we are back in Canada, it is important to mention the scientific purpose and goals of the trip.
The primary focus is to examine factors that determine susceptibility to acute mountain sickness (AMS) in Nepali Hindu religious pilgrims. These pilgrims are participating in an annual festival called Janai Purnima. During the festival, pilgrims ascend on steep, muddy, single track trails to 4500 meter Lake Gosainkunda. A significant number of these people develop AMS due to the high altitude and possibly exacerbated by the short amount of time pilgrims take to ascend (usually 1 to 3 days). Those with AMS suffer from debilitating headache, nausea, weakness, and difficulty sleeping. AMS can lead to more serious life-threatening illness such as high-altitude cerebral or pulmonary edema.
Currently, we have no good answers as to why some people who travel to altitude get sick while others in the same party remain healthy. The primary goal of the study was to collect longitudinal data on pilgrims passing through the low-altitude village of Dhunche and then follow-up on their health status at the lake. For each of the 600 targeted subjects, we planned to collect either a spit or cheek cell scraping DNA sample. These samples will be analyzed by Martin as part of his PhD thesis.
In a smaller subset of subjects, we also collected a range of physiological data that can possibly be used to predict the onset of AMS at higher altitudes. In these 84 subjects, we examined a variety of measures including exhaled carbon monoxide, a value higher in smokers. It is possible that people with higher CO levels will have less oxygen available to their tissues, increasing likelihood of AMS. Follow-up at the lake determined which of the subjects were suffering from AMS. These physiological variables were my primary focus for the study.
After returning to Kathmandu, we immediately began entering data from questionnaires. The forms had been filled out by our Nepali collaborators and we needed frequent help interpreting answers. A quick analysis showed that over 93% of subjects recruited in Dhunche were met for follow-up at the lake. This low of a dropout rate is incredible considering the effort required to reach the lake. Now we will start sorting through the data and arrange it for data analysis.

See the full gallery on Posterous