Saturday was the first day of the Coldsmoke Powderfest in Nelson BC. The local mountain shop: Rivers Oceans and Mountains sponsors the ROAM Randonne Rally as part of the event. I decided to stop at the race on my way through to the Hypoxia conference in Lake Louise. I met Canadian skimo guru Stano and his family and joined them in their hut outside Nelson. As event organizers promised, the sky delivered a dumping of coldsmoke powder overnight before the race.

The race started up groomers and turned to switchbacks in the woods. On the ridge at the top of Whitewater resort we had a difficult skins-on descent that took out Stano and Ben Parsons from Montana. Stano rallied quickly and the two of us took off in the lead. He put some time into me on the transitions and the long descent but I reeled him back in the second big climb of the day.

We started the first bootpack together and descended to the second bootpack to find Ski Patrol still doing avalanche control work. Ben joined us after three minutes and we agreed to settle on the finish order at that point. A patroller gave us the okay to start climbing the couloir: “It’s bombproof!” A second later I cut loose a thick slab that swept over me and dragged the patroller down the bowl. He rode it to the bottom and skied away. The second patroller seemed unfazed and told us to get going. From there we completed the final short climb and long descent a good pace but with the finish order decided. My 2nd, 2nd place in 2 weeks.

My second race on full race gear, I am feeling pretty good with my fitness and performance. I am definitely looking forward to the slightly more competitive and longer races in Golden and Lake Louise in a few weeks. All my gear performed well and the skinny skis were even reasonable in the deep powder.  My Alpina Tibet MT sunglasses stayed fog free the entire race!

No pictures have been posted yet but I will add as they come. Results are available here.

After the race, I toured in Nelson, skiing laps on the White Queen and Evening Ridge as the powder kept falling and we kept getting fresh tracks on awesome lines. Monday we drove to Revelstoke and I spent the night at Stano’s apartment and then Today I continued on to Lake Louise for Hypoxia! 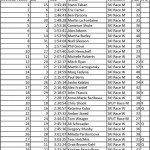