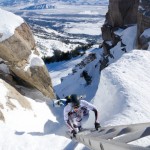 Me climbing the ladder at the top of Corbet’s Couloir Bootpack (David Bowers Photo).

The 2013 race season began for me in Jackson, WY. at the U.S. Skimo Championship. Two days of racing, started at Jackson Hole Mountain Resort on Saturday and continued on Sunday at Grand Targhee Resort.

Brad and I left Vancouver on Wednesday morning and picked up a Washington skimo racer and master boot fitter, Thierry, on our way through Bellingham. We made it to Jackson Thursday morning in time for a final training session up Snow King Mountain right in town.

On Friday we organized gear, picked up our bibs, and rested up. Skimo celebrity Stano and guide in training Igor joined us at the hotel. Not used to the cold in the Rockies we planned for a tough start when we saw the forecast at the start line to be -24 deg F.

Saturdays race covered 2440m of vertical climbing over 17.6 km of terrain. I started off in the second pack with Brad. The first climb went from the base of the resort, up a steep groomed run. Just after the start a big Moose crossed the track in front of the leaders. Halfway up the climb we turned off the groomed run and continued climbing up through icy moguls. I transitioned well but got left behind on the first descent. Keeping pace on the 2nd and 3rd climbs, I continued to lose time on the descents. The 4th climb took us up Corbet’s Couloir where we transitioned into a steep bootpack finishing up a ladder over the cornice to the summit and the JHMR tram station. The 4th descent took us all the way to the bottom of the mountain over steep mogul runs and through shrubs on the lower slopes. My legs were wrecked from descending and the final climb was slower than I would have liked. I skied into 19th place, almost 34 min behind the national champion who completed the race in 3:03:25.

After the race we drove over Teton Pass to Driggs, Idaho. The race on Sunday was shorter with 1525m vertical climbing over 12.8 km of terrain. I tried to start with a bit more conservative of an effort but was excited and didn’t want to loose too much time to the leaders. The first climb went all the way from the bottom to the top of GT on one of the steepest groomed runs I have ever skinned up. Several spots we had to switch from skinning to a Nordic style herringbone technique. My first transition was fast and I held my place on the descent. The second climb I fell into pace with my group and had a good transition to bootpacking. The second descent I could see several skiers ahead of me including Brad and Stano so I really tried to push my speed and not hold back. I caught up to the next group at the transition and kept a good pace on the final climb. With a smooth final descent I finished in 15th place, only 16 min behind the winner who finished in 1:51:57.

Photos are from a variety of sources. Hopefully I got the credits right. 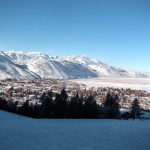 First view of the Jackson Hole and the Tetons from the top of a training ski up Snow King. 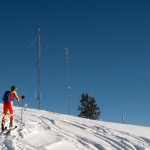 Brad S. out for an easy ski at Snow King before US Nationals. 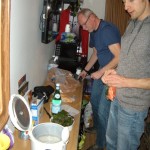 Brad and Thierry cooking a deluxe meal in the Super 8. 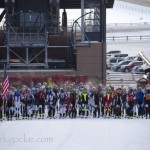 Racers on the start line of the 2013 US National Skimo Champs (Markgocke.com Photo). 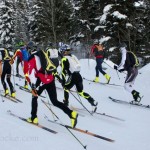 Racers off the start at the US National Champs. I am on the far right (Markgocke.com Photo).

Me climbing the ladder at the top of Corbet’s Couloir Bootpack (David Bowers Photo). 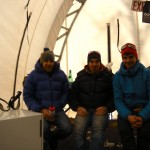 Warming up by the heater after the race. 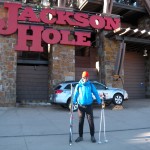 Posing in front of the Jackson Hole Tram post race. 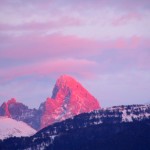 An alpine sunset on the Grand Teton from our motel (Thierry W Photo). 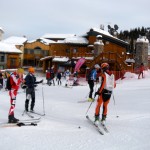 Canadians preparing for the start of the 2013 Grand Targhee Skimo Race. 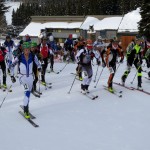 Sprinting off the line at the 2013 Grand Targhee Skimo Race. Thats me on the left (David Bowers Photo). 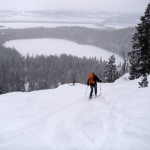 Average HR vs. vertical speed for each climb at Jackson Hole and Grand

Notes for the next race: