Alexis and I drove down to Snoqualmie Pass Friday evening for Vertfest. An eventful ride down, we were briefly held up by the customs agents for a bandit apple without its sticker. We stopped in Bellingham at Fairhaven Bike and Ski where their awesome ski tech Max managed to repair a binding issue on the spot, and then got passed by a high speed police chase through Seattle on I-5. We grabbed a motel room in North Bend, WA and set our alarms for 6am.

The race started at 10am and featured two climbs and two descents inside the resort at Alpental. Both climbs were steep from the start with sections of technical moguls to climb. The first lap had two short bootpacks as well. Descents were plenty hard, especially in the pouring rain/snow mix that made glasses and goggles useless. There was a suprisingly big field but only a few guys on race gear.  As soon as I saw Jason Dorais (2nd place at US Nationals in Jackson) lining up for the race I knew that there would be some serious competition.

I hoped that Jason would be taking it slow enough and my fitness would have improved enough that I could stick close on the first climb and get the chance to follow him on the descent. Pretty quickly though he broke away from me and then on a steep section I slipped and dropped a ski after which I completely lost contact. From there I spent the remainder of the race in 2nd place all by myself trying to keep the pace up.

For the most part everything went smooth, I tried to stay as efficient as possible on the steep sections. Transitions went well and bootpacks were good. All my gear performed well and despite adverse weather the race was pretty good! I finished my first lap in 44min and the race in around 1hr 23min. It was definitely good practice for the next few races coming up in Canada.

Alexis ended up 3rd in the Rec (1 lap) division in his first ever skimo race. We stuck around to demo some skis and wait for the prize ceremony and then made tracks back to Canada in order to get home in time for dinner. Only took a few pictures and they ended up blurry because of the weather. Hopefully some pro will put some up and I can post them. Results are up here. 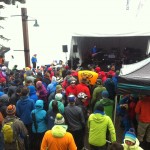 Band at the awards ceremony 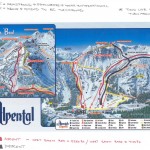 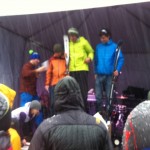 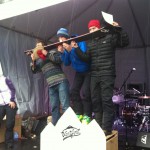 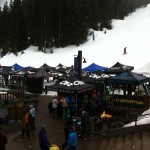 Next up: ROAM Randonee Rally in Nelson BC