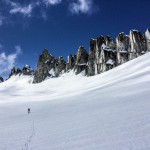 When Nick and I set the FKT on the McBride traverse in BC, we chose not to bring a rope despite being on significantly glaciated terrain. We were confident in the height of the snowpack, knew we’d be travelling in firm conditions, and were both aware of the risk we were taking.

I’ve seen lots of questions about the need to carry or use a rope on the South Coast of BC for ski touring on glaciers. Often the first “expert” to answer says something along the lines of “if you have to ask, you should just bring one”. While there may be a bit of truth to this, it doesn’t really help the discussion. I think it’s good for people to be aware of common AND not so common practices and be able to make decisions. Here’s how I think about using ropes. Keep in mind, this discussion is purely about ropes for glacier travel/crevasse rescue on the South Coast of BC. As soon as you venture into terrain where a rope may be necessary for upward or downward progress, or to a different region, it’s a different discussion.

A mellow day skiing on the Spearhead. While Nick and I wouldn’t bring a rope, we had a range of skier experience with us so elected to cary them in the pack and wear harnesses.

1) Modern glacier ropes and harnesses like the Petzl RAD Line and Altitude Harness are incredible light and compact. If you are waffling about carrying a rope, it’s getting to the point where it’s really not a burden to carry this stuff. Do yourself a favour and buy the ski mountaineering specific equipment and you won’t second guess the decision to bring it along. Whereas if you have your heavy summer climbing harness and humongous 60m, non-dry treated, 10mm rope, you’ll be agonizing over the decision to bring it. When your entire kit weighs less than a nalgene of water, it’s kind of a no brainer.

2) In early season conditions (sometimes just October and November in a deep year but even as late as December and January in a thin snowpack year), when the summer crevasses are just starting to bridge over, I generally bring a rope (or just avoid the glaciers!). Crevasses are much more common at this time and can have just a thin cover that you can break through. This is the time of year that I am most concerned about falling into an otherwise invisible crevasse, when the snowpack most resembles the Rockies or the Alps. 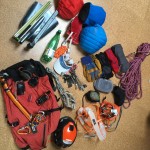 A typical pack for a day that might involve some glaciers. Note the 30m dynamic rope as we anticipated the potential for some actual climbing!

4) In mid-winter and spring, when the snowpack is deep, I usually choose not to carry a rope on Coastal glaciers. I try to avoid heavily crevassed areas (knowing what things look like in the summer is a big help), watch out for sags or other surface signs, and am especially cognizant of areas where the heavy snowpack may cause crevasse-like moats between snow and rock.

In any situation where I do choose to bring a rope, I then have to decide about actually employing it. It is common practice in many glaciated areas to ascend roped together and then ski down unroped. This is less common on the Coast because of the relatively large snowpack. If parties carry a rope, it’s most common to see the rope stored in a pack while wearing the harness. This way, in the event of a crevasse fall, the skier can be rescued but a fall cannot be prevented.

It is pretty uncommon to descend on skis roped together, especially on the Coast. While there might be a few situations where this is necessary, skiing downhill roped together is extremely difficult and can be dangerous. If you are considering this, it might be worth considering a different route or hunkering down for a bit. 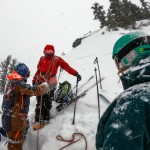 Early season crevasse rescue practice with Coast Mountain Guides. If you’ve got your systems dialled, that will go a long way to getting out of a situation.

If your party does choose to carry the rope, it is good practice to have several members of the party carrying shorter ropes rather than one member carrying a single rope. If several skiers each carry a 30m RAD Line, and one falls in a crevasse, the others can enact a rescue. If just your party leader is carrying a single long rope and they fall in the crevasse with it, not much can be done.

There is a bit of debate about the length of a glacier rope. A single 30m rope for a team of three or more does not give enough extra rope to conduct an efficient rescue. I believe that having several 30m ropes distributed throughout the group is sufficient. Of course, if the skier falls into a crevasse that is more than 30m deep, you may not be able to rescue them and might be wishing you had a 60m rope. I’m personally comfortable with this risk but others might not be. The RAD Line is also available as a 60 so if you feel like that extra length is important, do it!

It should go without saying but these are my specific thoughts for the Coast Mountains and routes like the Spearhead or Garibaldi Neve Traverse. Others may have different strategies and I would operate very differently in other mountain ranges. I’m also not a guide. This is just my system. Different systems and approaches have pros and cons and probably the most important thing is to be familiar with one and enable to enact it in the event of an emergency. Colin Haley has some very good thoughts on crevasse safety via a first hand account here: Colin Haley’s Crevasse Incident 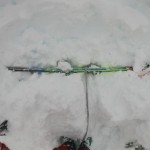 2 thoughts on “Ropes on the Coast”