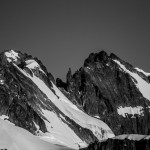 This is a bit behind schedule but still hopefully worth a read. If you’ve ever driven the Sea-to-Sky Highway between Squamish and Whistler on a nice day, you’ve seen what is essentially the entire Tantalus Traverse. Tantalus Provincial Park is located on the West side of the Squamish River Valley just North of Squamish. From the Tantalus Viewpoint on Hwy 99, you look out directly at the massive Rumbling Glacier that falls off the East side of Mt. Tantalus, the high point of the range. To lookers right, runs the long North Ridge, and to the left, the South Ridge towards the Haberl Hut, and then down to Lake Lovely Water – a popular destination on it’s own. 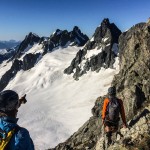 Exploring peaks at the back of LLW with Jim and Nick.

Much like some of our other big objectives, Nick and I have been talking about the Tantalus Traverse for a few years. We’ve hemmed and hawed about it and discussed logistics but this summer was the first year I really felt like it was a reasonable objective. Last summer, we made a few forays into the range but really just scratched the surface. This spring and early summer though, we made a handful of trips into the area, both by foot and with a helicopter assist, to explore some of the more obscure areas as well as the popular ones. Having more experience in the Tantalus definitely made it feel a lot more reasonable. It was no longer the unbelievable and untouchable peaks on the other side of the valley, but something that I could do as a reasonable day trip. 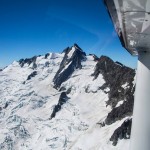 Sea-to-Sky Air recon of Tantalus conditions the day before.

One of the more exciting trips this spring was flying into the Haberl Hut with Nick and Jim to traverse the peaks at the back of Lake Lovely Water. These are rarely climbed so would be a good exercise in travelling across unknown terrain. We didn’t have detailed typos or obvious routes to follow, just vague descriptions from trip reports and the odd climbing relic – a piton or rap sling here and there. Stronger climbers, Nick and Jim led the charge though we did have a full set of climbing gear for the more technical sections. We spent around 7 hours getting from the Haberl Hut to the Lake and tagged Ionia, Panderus, and Lydia. Red Tusk looked just a little more difficult than I wanted to take on in the moment. Part of moving fast in this type of terrain is being comfortable climbing easy rock as well as moving along quickly in areas where the rock might be loose or covered with vegetation so this was good practice. 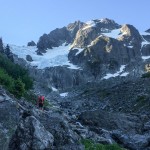 Emerging into the alpine below Pelion.

July rolled around and the snowpack was holding on well. We saw a good period of weather in the forecast and decided to go for it. Part of the problem of the Tantalus Traverse is the logistics of getting to the start and finish. We chose to go in the North->South direction in order to be able to rappel the crux section rather than have to climb it. A stronger climber would likely find it faster to go the other direction!

The day before, I booked a flight with Sea to Sky Air to do a flyover of the area and take some conditions photos. I’ve been out now a few times with Pilot David Eastwood and he is awesome! I highly recommend a flight in the area. Will joined me and after our flight, we canoed across the Squamish River to the Trailhead at the finish and stashed a load of climbing gear that would help Nick and I cross the river at the end of the day. Crossing the Squamish River is one of the cruxes of accessing the Tantalus Range. For this reason, I think that any times should be taken on the West side of the river and not including the crossing itself. The reason is, some crossing methods are much faster than others and it shouldn’t depend on your access to a canoe or other equipment. For the record, we stopped our watches when we arrived at the Cable Car Tower on the West side of the river (what I would consider the start of the trail). 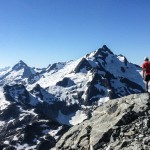 Nick on the shoulder of Pelion looking out towards Mt. Tantalus.

We opted for a moderately early start and parked our car at the Sigurd Creek Trailhead just after dawn at the North end of the traverse. The Sigurd Creek trail has been recently improved by the BCMC but it is still a bit of a grind. It’s not very direct and still rather rough. It is a beautiful area though and the pain is rewarded when you emerge below Pelion. We passed a pair of climbers with heavy looking packs on the trails and quickly compared notes as we were heading out for the same objective. At the end of the trail, we started up the moraine below Pelion and rock hopped until we hit the snow line. Good snow conditions made it easy to motor up the glacier to the shoulder on the East side of Pelion. Here we dropped down the South Face and traversed West to gain the Zenith-Tantalus Col. This is where most parties start with a heli drop. We filled up our water bladders and kept trucking towards the North Ridge. 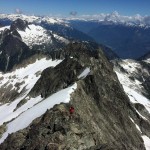 High on the North Ridge looking towards Whistler.

The North Ridge of tantalus can be climbed directly but we detoured up a snow slope through a col in the ridge. This would probably be much faster in better snow conditions but a big moat meant climbing up dirty broken rock to get to the Col. From here we gained the North Ridge proper and started making good time cruising along. It’s a spectacular position – the ridge is essentially a sidewalk’s width but with the dramatic rumbling glacier falling off precipitously to the East and the West side dropping down towards the ocean inlets. A few obstacles had to be avoided on the ridge but it was primarily good rock scrambling aside from one section of nasty scree high on the ridge. The final scramble to the summit was very exciting with awesome exposure. From the summit, looking South towards the Witch’s Tit and Dione Peak is a bit scary as the mountain becomes dramatically steeper. We broke out our rappel ropes (2x30m of 6m cord) and started rapping what is described as the ‘Low Route’ in Kevin McLane’s Alpine Select Guide. Nick nailed the descent and it went without a hitch. Once we made it onto the snow patch on Dione’s Shoulder, we knew we were pretty much home free. 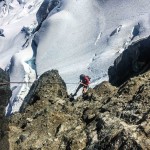 We cruised down the Dione Glacier and past the Haberl Hut. Snow coverage was still good and there were few crevasses. Crossing over to the Serratus-Ionia Col put us into territory that we were very comfortable on and we nailed the descent down to Russian Army Camp. From there you pretty much just have to put your head down and follow the trail. I was dragging pretty hard. Once we made it into familiar terrain, I think my body shut down a bit. By Lake Lovely Water, I was feeling the heat and pretty tired. I told Nick we needed to stop for a few minutes while I jumped in the lake to cool off. 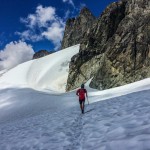 Nick jogging down the Dione Glacier en route to the Haberl Hut.

We were off again 5min later and I stumbled down the trail as quickly as I could. We finished just under 11.5 hours when we arrived at the river. We just had to cross and walk a few km out to the Squamish Valley Road to get the car.

While I think this was probably the fastest absolute crossing of the Tantalus, I suspect others have done it quite quickly. I also think that it has probably been done quickly in a better style – tagging more summits. I think the ultimate traverse in terms of an aesthetic line and good style would be a traverse of the whole range, including the peaks at the back of the lake. Things to build up to… 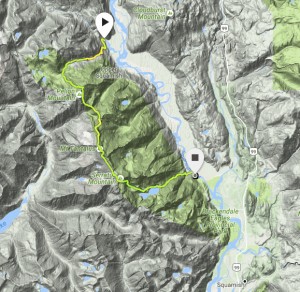 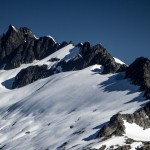 Dione and the Dione Glacier with the Haberl Hut bottom right. 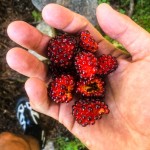 Berries on the Sigurd Creek Trail 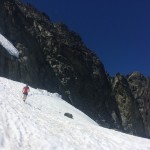 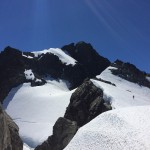 The upper section of the North Ridge. 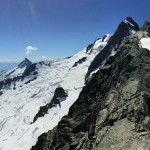 Sidewalk in the sky. 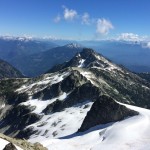 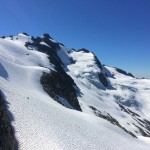 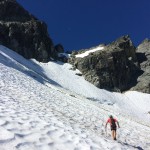 Nick heading towards the crappy Col to gain the N Ridge. 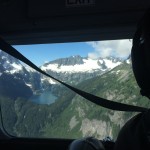 Scouting conditions with Will. 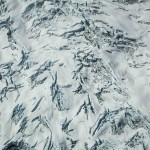 Crevasses on the Rumbling Glacier. 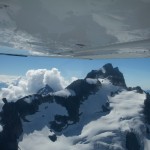 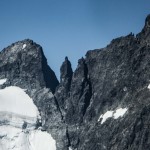 Closeup of the standard route on Tantalus. 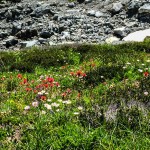