The phenomenal weather in the Sea-to-Sky has made for a busy summer. After travelling most of last summer, I made a point 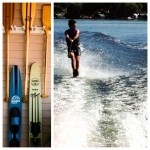 Waterskiing on the lake.

not to plan any extended trips this year. The summer still passed quickly with skiing, running, climbing, and school all competing for attention (don’t worry boss, school is winning).

After our trip to Washington, Sarah and I each flew to our respective parents for a week to relax. I was pretty excited to try my Dad’s new waterskis behind the speedboat on Lake Minnetonka. I also got to see my extended family and play with the cousins on the tube. I got to stalk my Mom around the kitchen to absorb some new recipes and enjoyed being taken care of like a guest at their Bed and Breakfast. 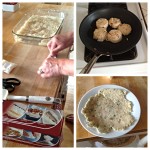 I also decided to enter the St. Paul Trail Marathon. It was my first go at a marathon distance race so I gave myself the relatively arbitrary goal of finishing under 3:30. I think the organizers were a bit loose with calling it a trail race as a majority was spent on pavement though wee did spend a bit of time on the Battle Creek ski trails. 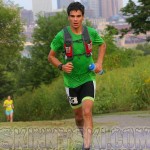 The race started really FAST – way faster than I ever run in training. One runner got a big lead early on. I settled into a rhythm with eventual winner Martha Nelson who would open up big gaps on the long paved descents of the first half. I managed to catch back on with her as we climbed up to Battle Creek but she quickly dropped me a final time. My legs were starting to give out on the rolling descents after running so fast in the first half. I managed to hold my third place until mile 24 when a guy and girl each passed me looking much stronger (not walking). 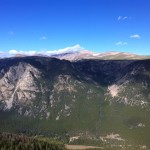 I jogged into the finish with a time of 3:25 and an official place of 6th though I am a bit skeptical that every racer managed to stay on the course. One race who placed ahead of me managed to go from being behind me at one aid station to ahead of me at the next without ever actually passing me! No biggie though – I crammed down some fruit and soda and we headed back to the lake! 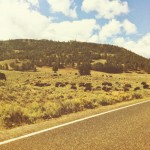 Buffalo on the road in Yellowstone N.P.

I would definitely recommend the race but hope the organizers can put a bit more effort into marking the trail and ensuring everyone stays on course. I also dislike when races have different distances start at the same time. I started in a big group including people racing the marathon, half-marathon, and 10k. This isn’t a huge deal but can be frustrating to decide who to chase.

After a few more days of waterskiing, Chris and I headed out in the Subaru to deliver him to a new job in Seattle. We took a detour through Yellowstone National Park and then pushed on to Squamish.