November and December were two of my biggest training months this year with a big focus on volume, especially skiing vertical ascent, and this is pretty well reflected in the numbers. I’m happy with my totals, especially compared to the same months in 2012 (as I prepped for US Nationals in January) although the low numbers were partially due to living in Vancouver at the time with more difficult access to vertical terrain and snow to ski on!

Total training hours in November and December with 2012 comparison.

Total vertical ascent in November and December with 2012 comparison.

Hours increased weekly and vertical followed the same pattern. There is still a significant amount of running volume but mostly because of bad weather or lack of snow. I finished December off with a relatively easy week over the holidays to rest up before one final training push in preparation for races in February and March.

Strength training at Challenge by Choice has been going well. Two days a week in the gym and I have been pushing bigger weights and lower reps. Once race season starts, I will transition away from high weights and towards strength-endurance maintenance exercises.

Andrea joined me at Paul Ridge one day to help with lactate testing, showing that things are looking good and the numbers are right where they should be. It is comforting to see FBLA pushing closer and closer towards VO2max.

Lactate summary data. The graph on the right shows individual data points. The key values are then calculated. Not a perfect test but working in the field always makes things tricky. 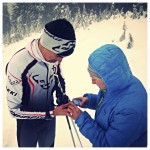 For lactate testing, I am using a Lactate Pro meter and Suunto Ambit heart rate monitor. There is a handy Excel script designed to make profile analysis simple. I plug in the numbers and it computes the key information. If anyone is interested in doing a test, email me or leave a comment below!

My last workout of the year was an exploratory run up the cut for the new gondola in Squamish. I’m hoping for a more direct ascent trail in the style of the Grouse Grind but it made for some fun scrambling up the steep sections. Can’t wait for it to open!

Going forward, the plan is to continue to increase volume and work on strength training though mid-January and then switch to higher intensity and lower volume training through mid-February to peak for the important races in Feb and March. A second smaller cycle will hopefully help me peak again for speed missions in late April and early May. The season is coming together and I am really excited that some of this work might pay off!