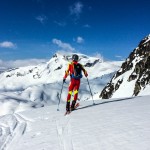 With pretty mangled feet, I’ve not got much to do other than write a blog post so here goes. The McBride Traverse is a BC Coast Range classic that goes through a big chunk of Garibaldi Park. Several variations exist with parties starting both from the top of the lifts at Whistler Blackcomb or in the valley and finishing either at the Rubble Creek Trailhead or further to Elfin Lakes in Squamish. Parties typically take between 5 and 6 days to complete the traverse, camping along the way.

The route follows mostly high alpine terrain that is very similar to the smaller Spearhead Traverse but is much more remote. While at any point on the Spearhead, it is relatively easy to descend to the valley, the McBride doesn’t offer such escape. As well, slopes are bigger and steeper with greater consequence in icy conditions. Aside from being fairly committing, its not particularly technical in terms of ski alpinism, just a long way to go.

While most people choose to camp along the route, it has been attempted in light and fast style. I’ve come across  three instances of the McBride being done fast. Andy Traslin (ex-skimo racer) did the McBride in a 41hr push including an epic crossing of an un-frozen Garibaldi Lake. In April of 2009, Alex Wigley, Keith Reid, and Craig McGee completed the first 1-day traverse of the McBride ‘Lite’, taking the lifts up Blackcomb Mtn and bivying at the Horstman Patrol hut. Starting their watches at the Backcountry Gate, Wigley and co. completed the traverse to Rubble Creek in 18hrs and 21min. In 2015, Bruno Bagneres led a group from Brohm Ridge to Blackcomb in ~28 hours. 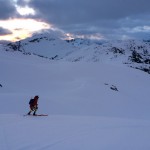 Nick skiing down the Naden Glacier before dawn.

Nick and I have been talking about giving the McBride a try for a few years now. Good conditions are critical for a speed attempt, even more so than on the Spearhead because of the remoteness and the distance of travel. Best case is a deep snowpack and a long period of sunny, hot days, with deep freeze at night, followed by a cold snap. The icier the better. We’ve got the snowpack this season and the last week and a half has been unseasonably warm with melt-freeze occurring on all aspects. Unfortunately the cold temps were not quite enough to keep things frozen solid. We figured this was a good opportunity to try the traverse, especially knowing two separate groups of our friends had skied the traverse this week. Hopefully there would be an established track to help with navigation. The problem was that warm afternoon temps would turn the snow to slush and slow our progress. We debated different strategies – a bivy in the Horstman Hut, camping on the glacier, or skiing through the night. We decided that we wanted to be on the difficult and unknown parts of the traverse during daylight hours  but we could get away skiing the Spearhead in the dark. We also decided that we wanted to do a ‘full’ McBride by starting in the Village and skinning up Blackcomb rather than taking the lifts – partly out of laziness, not wanting to camp at the Ski Area boundary. 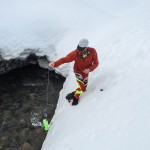 Fishing for water in the Chekamus River.

After an incredibly helpful map session with Matt Gunn and a quick brief from Ryan Allderman who just finished the traverse going South to North, we decided the weather for Friday night/Saturday morning was our best chance and things were worth a try. We can always bail at the turnoff of the Spearhead is what I told myself.

In 2012, Bruno Bagneres and I had actually set off to attempt the McBride from Whistler Village via Singing Pass. I didn’t sleep the entire night before I was so excited. When we arrived at the Overlord Col, we realized there was too much trail-breaking for a speed attempt so we just did a leisurely finish of the Spearhead in reverse.

Fast-forward to 2016, after a fitful four hours of sleep, I met Nick in Squamish and we hurried up to Whistler. We parked at Base II and started our watches at 2:30am. Immediately we met several cats winching low on the mountain and had to wait a few minutes before they gave us the all clear. Once on the Rescue Road up to Blackcomb Glacier, we put our headphones in and onto autopilot for the big climb of the day (~1600m+). I listened to a few episodes of the Low Pressure Podcast, including an interview with ski pro Lynsey Dyer where she talked about the need to be uncomfortable once in a while. This struck home and seemed appropriate given what was in front of us… 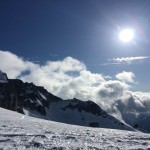 Big terrain on the McBride.

A quick stop at the backcountry gate to change to the powerful headlamps and put on helmets. The route follows the first half of the Spearhead Traverse out to the Naden Glacier. We’ve done the Spearhead quite a bit and I’ve spent a bunch of time out there in the last month training for the PDG so I felt pretty comfortable skiing it in the dark. Travel was fast and icy so we made good time. Arriving at the Naden Glacier, clouds were giving us a bit of trouble but it looked to be clearing and Nick was feeling optimistic. ‘Let’s see how it goes…’

Twilight came on quickly and we enjoyed skiing down the glacier with the sky glowing. Naden Pass is a bit of a bummer as it requires ~100m of skinning before descending again though trees to the Chekamus River. Here we caught the track of the other two parties and were able to skate several kilometres of low angle terrain to the toe of the McBride Glacier thanks to the well frozen surface. The climb to Mount Sir Richard is another big one (~1100m+) so we settled into a nice pace. At the top of Sir Richard we caught onto the tracks of Ryan and Alexis and had good light and vis. The snow surface was still fast and icy so we cruised around past the Gatekeeper and down to Wolverine Pass (the first of three passes/low points). This was our first real stop to have a bite to eat and apply sunscreen. 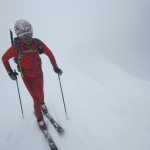 Me a bit stressed in the whiteout (Nick’s Photo). 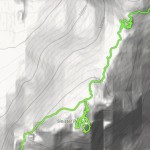 Circles around Sinister Peak in the clouds. Not ideal for a speed traverse.

Climbing up towards Forger Peak was a bit of a chore but a small climb in comparison to the others. I tripped and kicked my skis together breaking the plastic toe-lock on one of my bindings. After a brief moment of panic, I found the parts in the snow and taped it back together. Clouds were starting to come in as we skied around past Fake Peak and down to Drop Pass. Ascending out of Drop Pass was a notable change in snow conditions, from ice to isothermal mush. This slowed our pace considerably and drenched our feet, something that would have big consequences later in the day. As we gained the NW Ridge of Hour Peak, clouds closed around us and we lost any hint of the track. With apt foreshadowing, Ryan had warned me the night before that Sinister Peak would be the crux of our day. Nick and I spent a little over an hour wandering in circles trying to find the route and not ski off a cornice. I was admittedly a bit stressed at this point. With the excellent weather all week and a great forecast, we hadn’t even considered the possibility of low vis so it caught us completely off guard. Luckily, a combination of following our GPS and coming across a faint track, we found our way out of the clouds and climbed up to Hour Peak. In a whiteout – it’s incredibly hard to tell the difference between a 1ft windlip and a truck sized cornice. 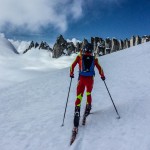 The stretch between Hour Peak and Mt. Luxor was the most beautiful of the day but I was a little too tired to really appreciate it. The mental stress and effort of being briefly lost sapped a lot of energy. I’ve heard of people hallucinating during long hard efforts and I wondered if this would qualify. Sadly, the clouds never morphed into purple elephants. Nick pushed hard here and kept us moving along. The ski down to Gray Pass was disappointingly slushy but with one climb left, we were motivated to keep going. I was resigned to plodding along behind as Nick broke trail. Morale was low. We crested the ridge near The Bookworms and came out of the clouds to see the Sphinx Glacier and Garibaldi Lake. Ripping skins and we had a great slush run down. Nick did a quick fish for water and we set off skinning across the lake. The only form of aid we had for the day was our friend Will who had been tracking us on the InReach and was waiting at the outflow of Barrier Lake with a can of Coke and some mango. This was a pretty big morale boost. He had hidden our running shoes at the snowline so after bombing down the trail, we stopped for a few minutes and changed out of our boots before the final plod down to the parking lot. Then back to Whistler to get Nick’s car and stop for some ice cream. I couldn’t walk all the way to Cows so we made do with Dairy Queen.

It’s been four years of training, planning, and watching for conditions for us to do this so I’m pretty thrilled to have actually gotten to complete the traverse let alone ski it quickly. I’ve got the best partner I could ask for on adventures like these and an awesome crew of supporters to rely on (thanks guys!). I’m excited to think that with better conditions (firm freeze and clear sky), several hours could easily be shaven off our time. It will be rad to see someone else push our time down (or better yet, go faster, as well as continuing on to Elfin Lakes!) and keep the competition going.

It’s also a good feeling to see the payoff of a season (or several seasons) of hard work. An effort like this confirms that all the hours skinning on the hill, doing intervals, and missing out on cooler adventures in the name of training are worthwhile. I do love training but a reminder here and there of why to keep at it is definitely welcome. 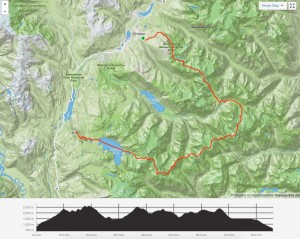 McBride Traverse from Blackcomb Base to Rubble Creek.

According to my Strava track, we covered a distance of 86 kilometres and climbed 6021 meters of elevation in 15hrs and 36min at a cost of ~9687 calories. Nine hours of skiing with soaked feet really did a number on them. It will be a little while before I’m recovered from the damage – I’m still hobbling two days later… Luckily, now it’s time to rest and get ready for next weekend’s Shedhorn Skimo race in Montana before heading over to Europe for the last one of the season – PDG!

We carried fairly minimal packs. We both used Salomon X-Alp20 packs for their capacity and secure ski carry system. We each had ski and boot crampons as well as an ice axe. These were completely unnecessary though I could see how ski crampons would come in handy if things were icy. I used my Dynafit RC-1 boots and Fischer AlpAttack race skis with three pairs of race skins. I wore a race suit and carried lightweight puffy pants, a Peak Performance puffy jacket, and an Ultimate Direction lightweight shell jacket. I carried a ton of food in the form of ~450ml of Hammer Gel and cookies. I started with 1.5L of water and we refilled/chugged more at the Chekamus River and Garibaldi Lake. 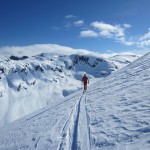 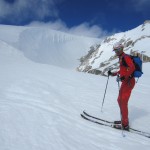 Starting to suffer near Hour Peak. 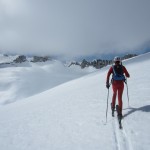 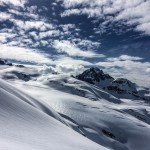 Very stoked to be skiing down Sphinx Glacier with Garibaldi Lake below.