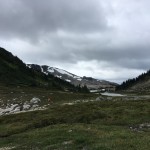 I didn’t take many pictures up the trail because we’ve spent quite a bit of time up there. I did pull my camera out once we crossed Helm Pass and could see the clouds would be an issue for the day.

I realize it’s been a little while since I’ve written a blog despite having had a few cool adventures over the summer and fall. I’ll start catching up with a recap of a little run in the park.

Garibaldi Lake is a pretty popular destination in the summer. TONS of tourists hike about 10k up a steep but nice trail to a beautiful high alpine lake and then head right back down. A few people go further into Taylor Meadows and up to Black Tusk or Panorama Ridge. Very few go much further. Nick and I have talked about running around Garibaldi Lake  for a few years. We’ve each made our own separate attempts but bailed for various reasons.

Inspiration for the trip came from a mention in the Alpine Select guidebook by Kevin McLane that makes mention of Peter Croft tagging all the major peaks around the Lake in an epic 24 hour (ish) push back in the day. He did this in particularly good style, soloing the North Ridge of the Sphinx. We pulled further info from a SuperTopo message post written by Tammi Knight. 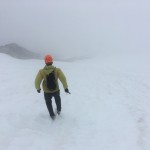 Descending from the whiteout on Castle Towers onto the Sphinx Glacier.

We made a not-particularly-alpine start from Squamish and started hike-jogging up the Garibaldi Lake Trail just after 7am on August 16th with the expectation that we’d have plenty of daylight. The trail went quick and I didn’t bother to take any photos. Soon we were cruising through the meadows and onto the Cinder Flats. We made sure not to miss our turn off the well used trail and up to the relatively untouched Helm Creek. The headwaters presented a bit of an obstacle with the creek draining from a tarn below the glacier. We opted to cross the somewhat deep looking creek right at the outflow where it was widest but only ankle deep. With shoes off, a rock took a little bite out of my pinky toe which would become more of an issue later in the day.

Moving along again, we were over Helm Pass and making good time towards Castle Towers, the first and biggest peak of the day. The peak was well enveloped in clouds and stoke was a little low. We weren’t too excited about running around a glacier in the fog and discussed bailing, or taking a low route around the lake. We decided to head to the summit and if it wasn’t good, we’d bail down back to the car. Just before the summit we encountered another party and said hello while taking a quick break. The traverse to the true summit of Castle Towers is a little tricky while the fog and wind added to the ambiance. We had hoped to just continue over the summit along our way but the fog made route finding on the steep terrain a bit too hard. We reversed the traverse and headed down a gully between the summits to gain the top of the Sphinx Glacier. 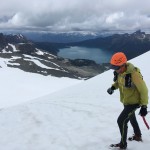 Nick cruising across the bulk of the Sphinx Glacier. Rubble Creek (where we came from) is at the very far end of the lake.

As we dropped onto the glacier, the fog receded and we realized we might still have a shot so we set along on our way, wrapping around the top of the glacier. Our next summit was Mt. Carr and we made another slight route finding error trying to take a short cut descending from the summit back to the glacier but got back on track pretty quick.

Crossing the bulk of the Sphinx Glacier went smoothly with only one steep and crevassed section. Back in the fog we found ourselves navigating with a mix of GPS and the occasional landmark. We’ve both been up in the area quite a bit but in a whiteout, a familiar glacier can be pretty confusing. We found the North Ridge of Sphinx which Nick was thinking about soloing but decided with the wind and fog, he wasn’t quite stoked about it. We scooted around to the scramble route and did a little out-and-back to tag the summit before descending Sphinx Pass to the Sentinel Glacier. 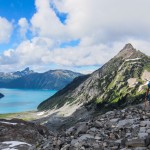 Sentinel Bay with Black Tusk waaaay in the background!

Here you connect with the route of the winter Garibaldi Neve Traverse so it’s tough not to think about how nice it would be to have skis to descend at this point. As well, my shoes were starting to squish my feet a bit and the wound from crossing the creek was getting rubbed pretty raw. Nevertheless, passing The Table and having views of Nch’Kay’s summit as well as the lake was pretty cool! We jogged across the pleasant Table Meadows and did a good job of finding the least bushy route towards our final peak, the summit of Mt. Price. Slinging up the south face, we were exposed to the sun and no wind meant the mosquitos came out in force. We hurried up to the top and took a quick break before regaining the rough Mt. Price Trail.

Arriving back down at Garibaldi Lake and the throngs of tourists was a bit of a shock but before we knew it, we were blasting down the main trail and back at the car! All in all, a beautiful day in the park. Definitely a route with some navigation challenges, engaging scrambling, glacial difficulties, and mostly off-trail. Highly recommended! 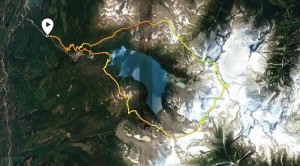 Panorama of our route. We started at the far left and crossed to the far right and then to where we stood on Mt. Price. We tagged Castle Towers, Mt. Carr, the Sphinx, and Mt. Price along the way. 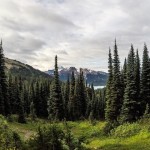 On the Taylor Meadows Trail looking across the lake. 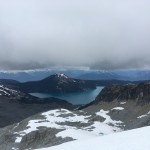 High on the Sphinx Glacier with our final peak, Mt. Price, in the background. 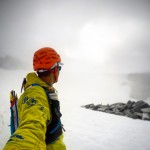 Foggy on the Sphinx Glacier. 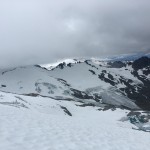 Looking across the Sphinx. We stayed high and contoured around to avoid crevasses. 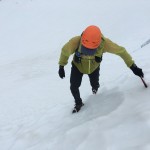 Nick at one of the steeper sections.

Me on the Sphinx with the lake in the back. 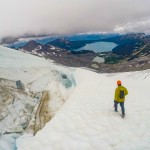 Just a few crevasses to avoid and generally not to crazy! 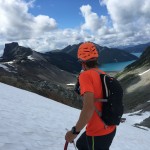 Nick on the Sentinel Glacier with the Table on the left. 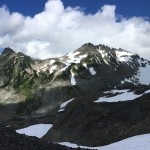 Looking back at Guard Mtn. 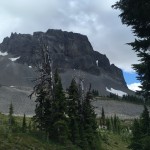 The Table is a really amazing peak. From some aspects you can see it’s teacup handle (right side of pic). The peak has only seen a few ascents. 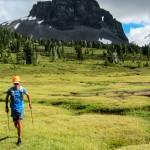 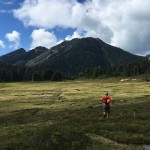 Nick in the meadows with our last peak, Mt. Price, above. There’s a bit of bushwacking here but we lucked out finding a pretty good route! 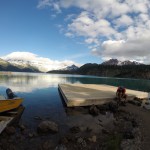 Back to the lake! We stopped at the dock for a quick snack before running down the trail. I quite like this spot – it’s just around the corner from where you meet the hoards of hikers.