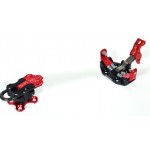 Plum is a French skimo binding company that produces several solid looking products. Among their all metal bindings (no plastic bits to worry about breaking) is their race series, the flagship of which is the Race 145. The name of course refers to the weight of one binding in grams. Certainly in the same league as the lightest bindings available (the Race 135 is lighter but has a lower release setting), the Race 145 is built with a steel rear fork giving it a forward release of 8.5 and a lateral release of 7.5.

I had my bindings mounted on my Black Diamond Drift skis for the purpose of an ultralight, go-anywhere, touring setup. I wanted to ski on piste, powder, steep chutes, and the occasional small drop, all while keeping as light as possible on the ups. Mounting is not tricky but requires a trusted technician and a good fit to your boots. They came back looking great. Depending on how tightly they are screwed onto the ski base affects the tightness of the front release lever. One of my bindings was screwed on slightly tighter and so requires more force to work the lever to release the boot from the binding. Not ideal in a race situation but not terrible either.

Stepping into the bindings is easy, line up the pins and push, the bindings lock shut. No fiddling around with locking the lever. Kick down in the back and you are in downhill mode. If the rear piece tab is down, you stay in walk mode. Taking your skis off is as simple as reaching down and squeezing the front release lever.

With the moderate DIN setting, I have only accidentally released twice. Once after going face (and ski tips) first off an invisible wind lip and again after slamming into an unseen snowbank. Both times the heels released, allowing me to fall forward while the toes held. Other than that, the bindings have held on tight for all manner of steep slopes, icy crust, drops and anything else our snowpack can throw.

No brakes means it is necessary to have leashes or risk losing a ski. I hate dealing with a leash slowing down a transition and ended up spending most of the season going without. It takes a little bit of effort to remember you can’t set your skis down but after a while it is pretty well ingrained. My closest call was a solo day on the spearhead when I tried to transition to bootpacking on a steep slope. My ski slipped out of my hand and went rocketing down the glacier. I dived after it with visions of walking all the way back inbounds with one ski in my head but just before it shot into oblivion, the ski hit a bump, flipped over, and caught the binding in the snow. Very lucky.

Sticky wet snow can pose a problem for skinning. Snow builds up under the spring arms below the forefoot of the binding. This snow in turn freezes. When enough accumulates, it prevents the binding from completely closing when you step in. At first, it feels like the binding is closed but when you start walking it will pop back open and you lose the ski. When touring, this is less of an issue, scraping under the spring arms with a whippet pick dispatches the ice quickly. In a race though, it is a serious problem, though one that seems to afflict all tech bindings by any manufacturer. I have found that being careful with my skis helps and at the slightest hint of buildup, I scrape it out with my pole tip. If it ejects once, it is worth trying to scrape, otherwise it will likely just eject again. Hopefully in the future, this issue is something manufacturers can address. 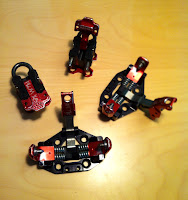 One of the biggest advantages of the Plum Race series of bindings comes in the Race 185 model. Because most skimo bindings are fixed, using boots with different sole lengths is not possible. If you have a race boot and a training boot with a different BSL, you are out of luck. The Race 185 comes on a sliding adjustable plate that gives you 40mm of fore-aft adjustment.

The price for the Race 145 is competitive with other race bindings at $719 (Escape Route).