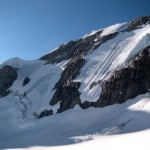 When climbers go to the trouble of packing up a rope, rack and gear for an alpine climb, hike in, reach the route, and then decide not to climb it for whatever reason, one way of justifying the effort is calling it a recon. This trip was definitely a recon – certainly not a failure.

With my car stranded in Whistler since the weekend, I took it as a perfect excuse for a bike ride on the Sea to Sky highway. I figure I have to do the ride from Vancouver to Whistler someday. When I filled in Nick on my plan, he was stoked to hear that I had the next day free and was up for climbing something. We decided that I would leave my dentist appointment at 3pm in Vancouver and bike north. He would meet me in Squmish and drive us to my car near the start of last week’s rubble creek classic race. From there we would drive to the Wedgemount Lake Trailhead and start hiking.

The plan went off without a hitch. Running a little late, Nick picked me up a little outside Squmish (OK – closer to Lions Bay) and we made it to Whistler Village in time for a quick dinner. We started hiking to Wedgemount Lake around 7:30pm by headlamp and made it to the hut just before 10pm. I think we suprised the couple up in the loft – probably not expecting anyone to arrive that late.
Nick had offered a sleeping pad to borrow to save space on my bike ride. As I blew it up in the hut, he mentioned the possibility of a slow leak. It was deflated before I even finished speading out my sleeping bag so I resigned myself to a night of sleep on the wood floor. I managed to stay fairly warm even with a very cold overnight low.

At 6am the alarm went off and we silently ate a cold breakfast again by headlamp. We packed up and headed out. After a quick trip down to Wedgemount Lake for water we were headed up scree slopes to the Armchair Glacier where we could access the Cook-Weart Col. This requires a step or two of scary scrambling but really was not too bad. Everything seems worse in big mountain boots.

From the col, we dropped down onto the glacier on the North side of Weart and swung around to the base of the North Face. Looking at the route, the bergshrund was pretty big and overhanging, and there was a significant amount of blue ice on the route. Our rack only had 4 ice screws, not enough to climb a full pitch and neither of us was very excited about soloing. Without much conversation, we bailed (I don’t think we really even said it) but decided to scramble the not very frequently visited Mt. Moe on the way.

Taking it’s East ridge, we had low angled scree the whole way to the summit. Not a scramble I would highly reccomend but it did have excellent views of the Cook-Weart-Owls North side, the Weart Glacier, and the Callaghan and Pemberton Ice Caps.

We took another detour to tag the summit of Mt. Cook on our way back down. Cook is a more frequently climbed peak within easy distance of the hut and day trippable from the parking lot.

Coming down Cook, we watched BC Parks Rangers arrive by helicopter and longline out the latrine barrel from the hut. We packed up our gear and cruised down the trail and back to the car in well under two hours. With a quick stop in Squamish, I made it back to Vancouver even before Sarah was done with work.

The good news is that we got to spend a beautiful (perfect weather) day in the mountains, had amazing scenery, scrambled two peaks that we likely would never have otherwise given a second thought, and got a really good idea of what is involved in accessing these North side climbs.

I also got to test out hiking with my new Aergonlite 2 poles from Leki. These are incredibly light two-piece carbon fiber poles that I am definitely looking forward to ski touring with this winter.