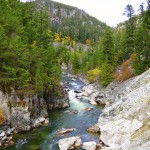 I don’t have much of an excuse for the recent lack of updates. There has been no lack of adventure, only time and motivation to spend more time on the computer. This should probably be split into a few posts but i’ll stick with the one long one and a bunch of pictures.

The first half of October was a frantic effort to prepare for my comprehensive exams punctuated by short trips into the mountains and efficient training sessions in Squamish. I did get a nice break when my Grandparents came to visit for the weekend and we spent both days touring Squamish and Whistler, visiting all the nice places and taking walks that I never take advantage of when guests are not visiting. My exams – one of the first big milestones in my degree – fell conveniently on the same Friday as my birthday. The rest of the weekend was spent celebrating both occasions by climbing with friends, eating amazing food, and a party with my birthday buddy Karina. 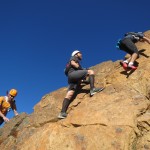 After staying up a bit (way) too late Saturday night, Brad dragged me out early for a day trip to the North Twin Sister down in Washington. With Brad and I representing the mountain athletes, we were joined by three serious ultra-runners: Gary Robbins, Ed McCarthy, and Adam Campbell. These guys set a serious pace on the logging road approach while I lagged behind fighting the effects of the previous night. With a bit of route finding diffuculty, we arrived at the base of the West Ridge and started the looong (500m) scramble toward the summit. The Ridge is never exceptionally exposed or difficult but is fun climbing all the way to the summit. Once the scrambling started, Brad and I were able to push the pace while the runners lagged behind. The summit had great views of the South side of Mt. Baker and the South Twin Sister. I also got out for some runs closer to home including a nice traverse of Mt Brunswick and Harvey from Lion’s Bay with Stano, Mike, and Will.

I hoped to spend the second half of October relaxing in a post-exam glow with free time to work on the next stage in the process – my research proposal. Unfortunately, all the work that I put off to focus on studying for exams needed urgent attention and I found myself busier than before! I did manage a hastily planned trip to Portland, OR and the climbing area Smith Rocks. A few parcels had arrived at the border that needed to be picked up. Paul has been on my case to come visit for a while so I figured why not make a weekend of it! 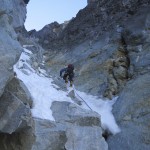 Before leaving for Smith though, Nick and I managed a day in the Whistler alpine doing a bit of climbing. Nick had spotted a line on the North Face of Mt. Rethel that he was keen to scope out and I jumped at the chance to follow him up something that might be a bit above my pay grade. The big storm in early October dumped new snow and the ensuing indian summer and melt freeze cycle made for excellent alpine conditions. From Whistler, Mt. Rethel looks like an unimpressive bump off the Wedge Massif. From Wedgemount Lake and the North however, Rethel is steep and jagged with snow and ice couloirs cutting clean lines to its ridge. We had a false start taking the wrong way around the lake to the base of the route but soon were booting up the classic Central Couloir. A quarter of the way up, we cut left into a smaller gully with sections of rock separating snow. Conditions were firm for cramponing and using ice tools and at the first rock step, we set up a belay and Nick led the first of 5 pitches of snow and mixed terrain. The gully ended at a ridge and Nick turned directly up a steep section of rock and then detoured around a pinnacle with an awesomely exposed and loose traverse back onto snow and up a final gully to the summit. It was fantastic to experience alpine mixed climbing with Nick to lead the way. The most intense/scariest part of the day though was on the descent as we were almost back to the lake and trail when we dropped down a steep dirt and gravel slope that ended up being much steeper than we anticipated. Nick scooted down it with little difficulty leaving me clinging to the slope cursing the shortcut. I did make it down after a minor meltdown with Nick looking on, unimpressed with my dirt climbing skills. 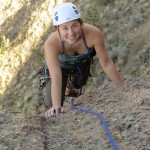 The lovely Andrea Kuba joined along on the trip to Smith and we spent a night with Paul in Portland, and then two staying at the incredibly well equipped campground at Smith Rock State Park. Close parking, a nice cooking area, flat campsites, and hot showers with flush toilets made for a pretty civilized weekend of camping. After an early start from Portland, we flew past Mt. Hood, into the park, and headed straight out to find our first climb. We had settled on the 5 pitch sport route Wherever I May Roam (5.9ish?) and scrambled over aptly named Asterisk Pass (a large boulder silhouette marks the pass) to find the start. Several parties were on the route so we started up with no plans of moving too quickly. A few traffic jams ensued when another group tried to rap the route but we were content to soak up the sun and scope out the nice views of Smith Rocks. 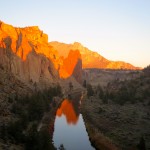 On the second day, we took our time making breakfast under building clouds and started up the trail just as light rain began to fall. We ducked into one of the many caves that sit under the cliffs and hunkered down waiting for the rain to stop. After brushing up on Smith Rock history in our guidebook for 30 min the rain stopped and we headed out. The route First Kiss (5.8, 5p) is pretty far behind the main area – about a 30 min walk – and there was no sign of the hoards of people we had seen and avoided the previous day. We started up the route with the rock all to ourselves with the wind building on each successive pitch. By the top we were nearing emergency mode and scrambled into heavier jackets and started our single rappel. We had contemplated trying Monkey Face in the afternoon but the high winds pushed us away from the face and towards the pub so we started hiking. With impeccable timing, the rain started strong again just as we finished hiking back to the campground so we showered and headed into town for a burger and drink. Our last day was to be our most ambitious but when we woke up to snow falling on the tent, we knew that climbing was unlikely. We did manage a really nice trail run through the park and scoped out the Monkey Face route for next time. After a bit of shopping in Portland, we made tracks for the border and spent the next day – the last of the good weather – climbing back on familiar granite in Squamish. Andrea was a good sport when I picked two routes, Wiretap and Xenolith Dance, that were a bit stiffer than I remembered from the first time I climbed them.

Just as the weather turned and a day after returning from Smith Rock, I headed back to Vancouver and a flight to Halifax, Nova Scotia, for the Undersea and Hyperbaric Medical Society – Canadian Chapter conference. As I speak, the snow is flying at Whistler and I am hoping that ski season will be on when I return to BC so another post should be in the works soon! 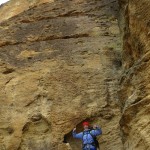 Base of First Kiss at Smith Rocks. 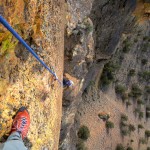 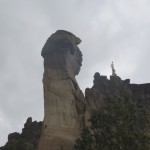 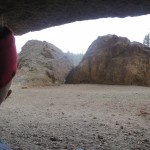 Hiding from the rain at Smith Rocks. 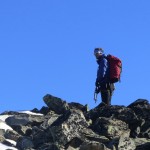 Nick on the summit. 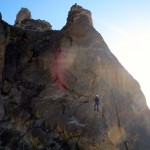 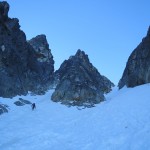 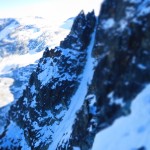 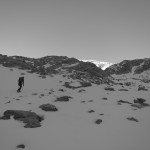 Nick searching for the best way back to the trailhead. 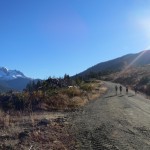 Fast group of guys headed for the N. Twin Sister with Mt. Baker in the background. 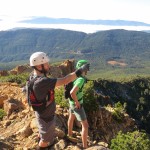 Arguing about mountains in the distance. 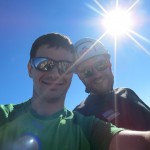 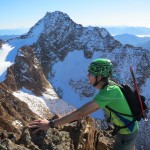 Brad Schalles not posing for the camera. 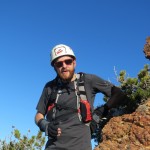 Gary Robbins dressed for a day in the mountains. 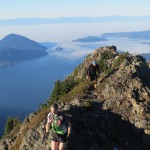 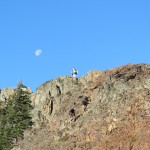 Scrambling at the top of Mt. Brunswick.

Descending Mt. Harvey with lots of fog in Howe Sound. 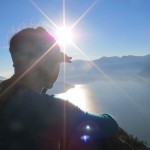 Finally in the sun at the top of the Chief.

Andrea topping out on the Squamish Buttress. 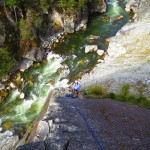 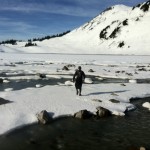