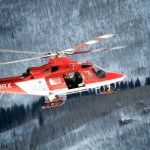 I have been putting off this blog post, not only because I have been swamped with real work lately but also because it took about a week for the excitement of the race to wear off and to recover from the effort.

This year’s North American Championships, the Powder Keg, was situated in the Wasatch Mountains  near Salt Lake City at Brighton Resort. Brighton is not the biggest resort around (nearby is Snowbird and Alta) but apparently it is the most friendly to skimo racers, allowing essentially unrestricted uphill travel and willingness to host a weekly citizens race series as well as the championship event.

Not interested in another 20+hr drive this season, I opted to fly to Utah. Stano was kind enough to organize a cabin for the Canadian contingent (+me) to stay in very near the resort. It was cozy but we made it work and had a pretty good time. 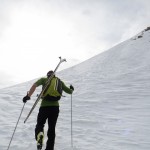 Nick scouting the boot pack up Mt. Millicent on Thursday.

The race was spread over three days starting with a sprint (using a format resembling Nordic ski sprints) on Friday, a normal individual race on Saturday, and a long, technical teams race on Sunday.

Nick and I spent a few hours both Thursday and Friday morning scouting out the various parts of the long courses for Saturday and Sunday. Friday evening, we all arrived for checkin and to start the sprint. I drew a high starting number and went 7th. We started in an individual time trial format, 15 seconds apart and I was among some big names on the American team so pretty excited. 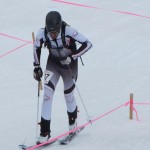 Pre-gear failure in the sprint qualifier.

I charged up the first skinning section of the course and seemed to be catching the racer who started ahead of me. I hit the transition and did a slow but relatively smooth transition to boot packing. Ten steps up, I felt my skis disconnect from my backpack and start to fall off. I managed to catch them but the ensuing time lost re-attaching them was enough to put me out of the running. I’m not sure where I finished out but it was well down the list. Nick also had the same issue and didn’t qualify either. We headed back to the cabin to rest while Stano, Reiner, and Andrew competed in the semi-finals and final round. 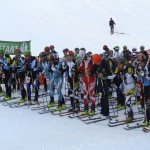 Saturday was an early wake-up for the individual race. We all chowed down as much food as we could before driving up to the venue and stumbling around in the early light for a warm-up. The gun went off without a bang so the organizer yelled it instead. The race started fast as usual but by the top of the first climb, I found myself in a comfortable position (9th) at the back of the front pack. I lost touch with the leaders on the descent and held a decent position until the 3rd descent and 4th climb when Nick and Pete Swenson both passed me. I hoped I could catch them on the final climb but was feeling flat and got passed once more. I skied conservatively on the last descent and crossed the line alone in 12th. 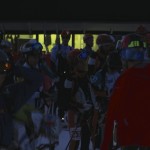 Racers mill about before the start of the teams race.

Saturday night, we refocused on the team event. The teams race involved skiing as a pair over a longer course (3.5hrs compared to Satuday’s 2hrs) that involved some moderately technical terrain using fixed ropes. Nick and I had been getting each other stoked for the race for the last few months and were feeling strong. Race morning rolled around ridiculously early and we lined up at the start just as dawn was breaking. Nick and I situated ourselves on the front line and we were off (this time with a bang!). The race started not with the usually 100m sprint that afflicts skimo races but at a much more civilized pace. It may have been the altitude, the previous two days effort, or the knowledge of the pain to come but everyone seemed content to settle in and plod along. 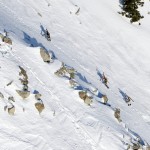 Ascending the fixed rope. I’m the third one in this photo with Nick just behind. ISMF Photo.

Nick and I pushed our way into 3rd position just behind Americans John Gaston/Max Taam and Jason Dorias/Tom Goth. Our first descent was smooth enough for us to hold our position and we started up the second climb in a perfect spot for the upcoming fixed rope section. We didn’t want to push too hard and blow up but we wanted to be ahead of the crowds to avoid get stuck on the ropes so 3rd was perfect. Just before transitioning to the ropes, we head a helicopter take off from the base area.

At the ropes, we put our skis on our packs and pulled out a via-ferrata set and an ascender and clipped into the ropes. As we climbed, we had to pass anchor points where the rope was tied and clip our gear around them. We caught up to the two leading teams near the top. Though the terrain was not overly technical, it was reasonably and with the noise, wind, and spindrift from the helicopter, the situation felt fairly dramatic but we kept our cool and took off running down the ridge following the leaders. 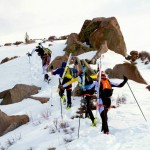 Just about to be passed at the top of the second to last climb. ISMF Photo.

We lost contact on the next descent but had a smooth transition to the next climb where we realized no one was ahead of us on the track. As we were frantically discussing if we had gone off course, we saw the two teams who had been in the lead coming out of the woods below us. They had skied off course on the descent and we had inadvertently moved to first position. Knowing it wouldn’t last long, we maintained a steady pace up the third climb and they caught us at the top.

The fourth climb was a hellish off-camber track set on snow that had gone through a melt freeze cycle and was rock hard. The sun was shining strong and it was one of the biggest climbs of the course. This was definitely a low point in the race for me. We could see the third and fourth place teams below us on the climb.

The Canadian team chasing us throughout the day. Reiner and Andrew.

Back in the woods on climb 5, we felt better and picked up the pace, being overtaken at the top of the climb on the boot pack by Marshall Thompson and Teague Holms. We tried to hold close and regain 3rd on the last ascent but both of us were pretty exhausted (especially me). Marshall and Teague managed to keep the gap and we finished just a few minutes back in fourth, taking about three and a half hours to finish. I’m pretty stoked with our finish. It would have been great to get on the podium but we gave it what we had. I’m also really glad I got to race with Nick. We have been training hard all year together and pushing each other hard so it was a no-brainer to team up. Thanks for the great race!

After the race, everyone in our group was pretty worked. We enjoyed the hot tub and everyone was in bed pretty early. The race was fantastic and well organized. I would certainly like to return. I would certainly want to arrive a little earlier in order to acclimatize. My dad came along for the weekend and drove us around and took a bunch of great pictures in the races. It was great to have him there for a familiar face on the course and to hang out with after the race.

As always, I raced on my Dynafit Dy.N.A Evo boots, PDG skis, Colltex skins, and fuelled using Hammer Nutrition gels and endurolytes. Specifically for calories in the individual and team races, I squeezed 4 Hammer Gels into a 300ml soft flask and filled the remaining space with warm water. I carried two 750ml bottles, one with plain water and one with water and endurolytes. 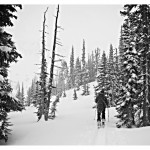 Now we are frantically getting ready for this weekend’s race, the Dogtooth Dash at Kicking Horse in Golden BC. Stano and I took on the organizers role this year so are trying to make the event a success and still compete in the race. As we get closer to the wire, it is getting a lot more stressful! This past weekend was the US National Championships at Crested Butte in Colorado and though I am a bit disappointed not to have stayed and raced, it was nice to have the weekend off racing to get in a bit of powder skiing with Nick, Karina, and Andrea!

Now off to the Dash! 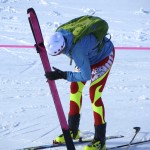 Melanie Bernier is a big deal for Canadian skimo. 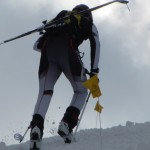 In the boot pack during the sprint race. 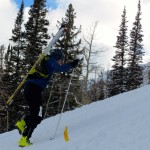 Nick booting in the sprint. 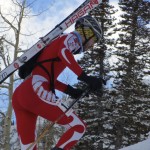 Stano booting in the sprint. 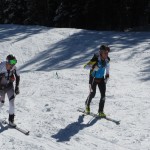 Nearing the end of the individual race. 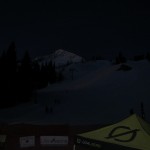 Mt. Millicent barely visible at the start of the teams race. You can just see the headlamps of volunteers setting the fixed lines. 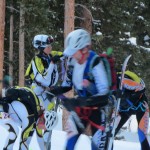 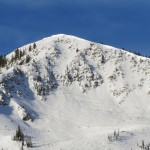 A zoom of Mt Millicent during the teams race. Nick and I are dots right in the middle of the face. 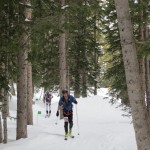 Nick leading the way during the teams race. 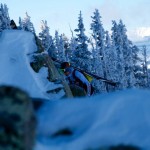 Finishing the first climb in the individual race. ISMF Photo. 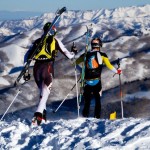 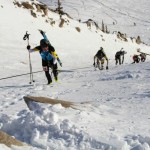 Climbing the fixed rope in the Teams race. I am at the back waiting for the 2nd place team to clip around an anchor point. ISMF photo. 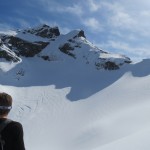 Nick and I got the chance to ride the new Sea-to-Sky Gondola opening in May in order to scout out the potential ski terrain. It looks good.