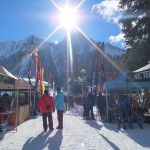 The last week has been a bit of a blur travelling to two races. The first, nearby at Alpental in Washington, and the second, a little further away at Whitewater in Nelson, BC.

Last year, I raced Vertfest at Alpental and despite the torrential downpour throughout the race, really enjoyed it. The course was interesting and the vibe was fun with lots of people attending. This year, the weather let up a little and despite the threat of rain, managed to keep it limited to heavy snowfall throughout the race. Much of the course was drifted in and trail breaking was difficult for the leaders. 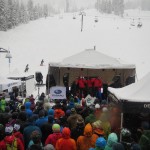 Podium with Nick at Vertfest.

As always at skimo races, the race started with a 100m sprint off the start line before settling into a comfortable 1.5hour pace. I quickly found myself side by side with Nick as we chased a few seconds behind Dynafit Team member Marshall Thompson who had flown in from Colorado for the event. We raced to the top of the first climb and skied the first descent together. Nick passed me early on the second climb, his technique is much smoother on the unstable track created by the new snow, and pushed a few seconds ahead, trying to catch Marshall who was breaking trail ahead. 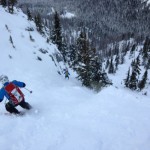 A break to do some lift-served storm skiing between races with Nick and Gary.

As I reached the top transition before the final descent, the course official seemed confused about where to continue on the race. Hoping to catch Nick, I pointed it down where I remembered the descent from last year and pinned it to the finish line. Marshall was waiting but 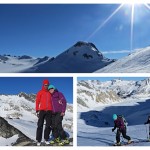 Skiing on the Spearhead with Andrea and Katerina before all the new snow.

Nick had not arrived (despite not passing him). A minute or two later when he did, we realized that the official had directed him down the ascent route rather than descent route. The race director sorted out the proper finish order (taken a the last checkpoint before the problem) and we were on our way.

All in Vertfest was a fun weekend. I road-tripped down with Gary Robbins and we took a little side trip to Mt. Baker for some pre-race skills practice. We were joined at Alpental by a big Squamish crew and it made for a fun race to have so many familiar faces around. After the race, I hung out for the second day and did my best to help out the Dynafit guys in their demo booth and then got out for some skiing in all the new snow! 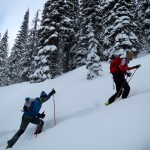 Scouting the ROAM course with Stano and Reiner. Guess we scouted the wrong descent..

After a short couple days of rest, it was back in the car to Nelson, BC to the Whitewater Coldsmoke Powder Festival.  Last year, avalanche conditions stopped our race early when Stano, Ben Parsons, and I were battling it out for the top of the podium. This year, with Reiner in the mix it was looking to be an interesting race.

Andrea took charge of arranging a big cabin to rent with a bunch of friends and also took care of meal planning so I was only on the hook for driving. Reiner, Karen, Ben, Jen, and Alan all joined us (Stano, Kate, Andrea, and I) in the cabin. We took a short tour on Friday to scout the first climb of the course. 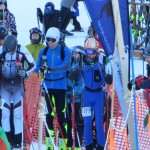 Race morning we woke up and all caravanned to the ski hill. The start was fast on a groomer and Reiner pulled away early, striding unbelievably fast. I pulled into second but when we hit the first section of off-piste switchbacks, Ben started to gain time. The first big descent was smooth and I tried to follow Reiner’s straight tracks downhill as closely as possible. I got a strong start up the second big climb but realized I had turned off course at some point and had to turn around and ski back down my tracks until I regained the markings. Luckily I didn’t lose any places and started charging back up. 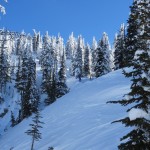 Just before catching Reiner at ROAM – can you see me in the trees? Not the guy in the blue suit – to his left!

As I climbed out of the trees below the first boot pack, I could see Reiner had taken a wrong turn and was following the rec course. I called out and he traversed the slope to get back on track with our course just below the boot pack. I got to the booter and could see him moving a bit slower above so I put my head down to climb as fast as I could. I was moving fast and was pretty excited when near the top of the boot pack, I felt my helmet bump into his ski tails. I didn’t need to look up to know that we were back together. 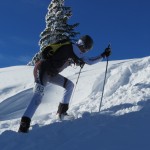 Andrea slogged way out onto the course and only saw us race by for a second!

At the top, we transitioned to descending and I followed him down along the ridge until we passed Andrea taking pictures. We tried to ski as far as we could but struggled to follow the markings. Switching back to skins on together, we started back up and pretty quickly one of Reiner’s skins failed. He had to stop and swap so I pushed hard to create a gap. At the transition, I headed downhill in first but about halfway down, Reiner sped past me. Midway through the descent, course marshals directed me to keep descending straight down. Unfortunately they were out of position and I ended up significantly below the transition area. To get back on course I had to wait to see someone else and then skin back up to the transition. I regained the course but now in 5th place. 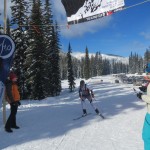 Skating into the finish in 5th at ROAM

I finished the final climb and descent without seeing anyone and skied into the finish without seeing anyone else. Unfortunately the officials were out of position when Reiner and I arrived but made it to the transition before the rest of he pack came through. Ben lost significant time as well, getting detoured with me. Looking at my Suunto Movescount file – the detour cost me almost 15 minutes! 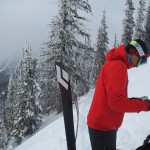 Andrea dragged me out for a tour after the race. Hard to resist with such good skiing!

Thats just the way it goes though with skimo. Staying on course is important but this definitely strengthens my resolve to make sure the race I am helping organize is clearly marked with marshals who are well informed. In the end it was a really great effort and despite a cold, I raced strong which bodes well for the upcoming Powder Keg Race.

Equipment performed well in both races. Despite very wet snow at Alpental, my skins didn’t ball up too badly and I came prepared for the cold conditions with my Colltex Extreme Skins and was luckily one of the few not to have skin failures during the race! Slightly cold toes at ROAM were an issue and I think it is time to finally bite the bullet and get my boots punched out a bit. Heres hoping for warmer weather at the Powder Keg. 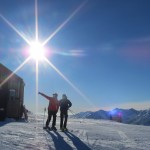 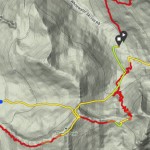 The arrow shows where the transition was supposed to be. Everything to the left is extra – me skiing around trying to find it…

I spent the rest of the weekend skiing and hanging out with friends and Andrea. We toured around Whitewater together and scoped out Nelson. Stano and I needed to make a stop at Kicking Horse Resort in Golden to do some recon for the upcoming Dogtooth Dash. We met with Mtn. Ops and skied some of the lines we want to take the race on. I can say that assuming weather and avalanche conditions cooperate, the race with be the most interesting edition yet with technical climbs and serious descents. We are trying to take the race in a serious direction this year and I think it is going to go well!

This week will a blur of catching up on work for school and preparing for the Powder Keg.  A few last interval workouts on skis and strength sessions at Challenge by Choice will hopefully be the final tuneup needed for next weekend. Nick and I will be practicing our race skills for the technical teams race with the hope that we can post a decent finish time. Hopefully a bit of powder skiing this weekend and then before I know it, I will be flying to Utah on Wednesday!