How is your season so far?

The  2013-2014 season has been an eye-opening one for me. The  South Coast of BC has been extremely warm and dry. When we get storms, it has come as rain, even high in the mountains. When cold, arctic air arrives, it pushes away the moisture and we have cold, beautiful, but snow free days. Our low-snow winter is coming after a long, warm, dry summer. Summer neve receded exceptionally far back, revealing crevasses and rocks not seen in previous seasons. Now, crevasses are barely (if at all) covered by our thin snowpack and loads of rocks are lurking just beneath the snow surface waiting to be sharpened on our edges. 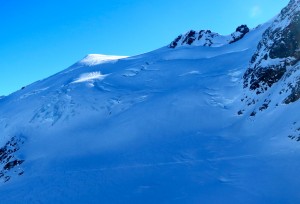 Big crevasses open on the Decker Glacier in Mid February. Usually this is a simple ascent without any signs of crevasses.

Low snow makes backcountry travel difficult. We have been hiking from trailheads with our skis on our packs to reach the snow. Below the treeline, skiing has been difficult if not impossible. In the alpine, areas that provided simple, fast travel now have obstacles that significantly slow pace. Avalanche conditions have been unpredictable with a much thinner, continental type snowpack. 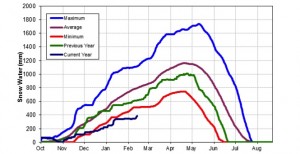 From BC River Forecast Center. Current snow levels are below the previous minimum.

How low is the snow?

Seasonal variation absolutely occurs and can account for some change in the snowpack we have but things sure seem to be pointing towards something out of the ordinary. Even knowing that May 1st is usually the peak snowpack, it is hard to look at our current situation and not wonder what is up. Water is important in BC, where hydro provides much of our power. The BC River Forecast Center measures snowfall totals throughout the province. The data shows a much lower than normal (even lower than the previous minimum) snowpack in the South Coast.

Of course, elsewhere in BC, snow pillow data can be much different. Some pillows in the Upper Fraser area show above average snowfall so far this season. It is hard to ignore what is happening in your neck of the woods however. Alan Kearney is a local photographer who has been tracking down early photos of glaciers in the N. Cascades Ntnl. Park and taking photos in a similar time of year from the exact same location. Some of the shots are pretty amazing. 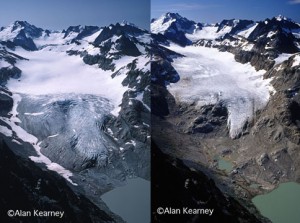 Alan Kearney Photo. Glacial Recession in the Cascades comparing 1981 to 2006!

Glaciers are a really telling sign of something going on. Changes are amplified through loss of glacial ice. Alan’s photos show dramatically landscapes over the geologically short time span of about 20 years. The most noticible difference is the loss of ice in the ablation zone – typically the bottom of the glacier where blue ice is revealed in the summer and a glacial “snout” forms. The photo above shows a great reduction in the size of the snout on the S. Cascade Glacier.

Ski resorts are likely to be hit early and hard. The following articles do a good job of explaining the problem and really hit home for me. The idea of losing skiing in the United States in my lifetime is pretty scary.

As a skimo racer, I have a pretty large carbon footprint which causes a bit of inner conflict. On one hand, one of the motivations for ski touring is the ability to travel efficiently, cleanly, and self reliantly in pristine wilderness areas. Unfortunately, to reach these places I drive (occasionally alone) to far away ski resorts that rely on massive energy and water consumption to make snow, operate lifts and gondolas, groom trails and all the other commercial aspects of a ski area.

Skimo is a gear intensive sport with skis and boots requiring significant energy and materials to produce each pair. On top of that, I’m not a delicate user of my gear and tend to replace it quickly (though I recently read that top racer Killian Jornet uses five pairs of race boots per season!). Luckily my home ski area, Whistler Blackcomb, seems to be at least trying to minimize their energy use and impact. In 2009, the Fitzsimmons Micro Hydro Project was installed on Fitzsimmons Creek (around the headwaters of which the Spearhead Traverse travels) and provides  power to Whistler’s annual energy consumption.

The main question that I have been struggling with is:

What do I do about it?

Protect Our Winters is a group of winter athletes trying to prevent climate change. Most of their efforts seem to be related to getting political – thats their first point on their “Get Involved” page. I was looking for more specifics on what I can do on a day to day basis aside from just talking about it. The advice that POW gives (listed down at point #6) is this:

Do all that you can. Get a more efficient car. Ride the bus. Insulate and seal your house. Tune your furnace. Buy an energy smart appliance. Put solar panels on your roof. Change your light bulbs. Put up a clothesline. Turn your water heater down to 120 degrees. Use a reusable water bottle.

I think this is a bit lacking as some are big changes that I may not be able to implement on a daily basis (insulating my house) and others are insignificant and something I already do (reusable water bottle).

The Three Actions Project is about choosing three things that you can do on a daily basis to reduce your energy usage. Not only that, but they are also things that can be measured to help understand exactly how successful you are. The concept of tracking performance is a key in the world of reducing energy use. As normal people, we have no idea how much energy we you (and therefore how much it costs us) to go about our daily routine. By monitoring our progress, it is possible to quantify the reduction in energy use (rather than just agreeing to ride the bus).

The first part of the project is to decide on three actions that I can sustain. I don’t want to pick something that I already do or is too easy (recycle) but I also don’t want to jump in over my head and try to do something that I can’t keep up with (entirely self-propelled transportation). Take a look at the different actions and consider what is possible. They are arranged in different columns and as you descend each column, the energy savings increase but the commitment becomes greater as well.

If you click on an action, a plan is given to complete it with detailed instructions. Hints and ideas to make things easier are given, as well as a thorough method of tracking progress. My plan is to first decide on three actions that work for me. This might take a bit of experimenting but by March 1st, I will begin tracking my progress. Keep an eye open for the next post once I have decided which actions to start with!

There is no doubt that climate change is occurring. If it is caused by us or not is still a hot topic of debate but to me the answer seems pretty obvious. Every person should be making an effort to reduce their energy use because:

Wedgemount Glacier in Garibaldi Park has receded significantly. The left photo was taken in 1979 (by Paul Chicoine) and the right in 2013 by me. Both show the glacier in summer melt. The viewpoint and zoom is different but the difference is obvious. In the ’70s, icebergs still calved off the glacier into Wedgemount Lake. In 2013, it is a 10 minute walk from the Glacier snout to the lake. Red arrows show the same rock outcrop for reference.

It is easy to ignore that something might be wrong. It is easy to justify that doing something is too much work or not worth the effort. It was even easy to avoid writing this blog post because I should be working on my thesis! It is important that we start thinking, writing, talking and most of all, acting upon climate change.