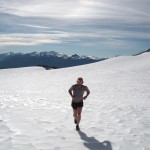 Three weeks ago, Stano and I set out to do the Semi-Alcoholic Traverse. This is a high alpine ridge run from Brandywine Mountain to Cypress Mountain. Aparently the proper Alcoholic Traverse finishes at Brew rather than Cypress Mountain but we decided Cypress was a better finish on a more logical route and with a better scramble at the end. We made it up Brandywine in good time but turned around as the weather deteriorated.Nick and I set out again to do it this week on a perfect crisp day. The hardest part of the traverse is arranging the cars, as you start and finish in two different places – both very far up logging roads. Having heard of epics involving mountain bikes and hitchhiking, we opted to each drive a car and do the shuttle.

We made quick time through Brandywine Meadows and started scrambling up the scree to Brandywine Summit. Only about an hour and a half to the top, we signed the register and headed on along the ridge.

The ridge was slow going along either ankle-busting boulders or snow sections. We ran as much as we could but also tried to play it as safe as possible. We did take time to stop and snap photos along the way as well as a quick break for lunch. Halfway along the ridge as you approach Mt. Fee, the rocks become more volcanic and the ground sandy rather than granite slabs. There were also pockets of new snow from several nights before indicating that it had stayed cold. The snow travel was generally very easy and fast as it was quite firm.

Rounding Mt. Fee, we could see our way on to Cypress. Fee is a pile of volcanic rubble. The South peak looks like an especially unpleasant climb. Lots of fresh rockfall littered the snow in this area so we moved quick.

After Fee, we dropped down a little bit to refill our water in a small snowfed tarn. This was the only running water we found between Brandywine Meadows and the glacier below Cypress. We took the direct route up Cypress, scrambling the imposing section along the ridge, and found it actually was quite easy – a very nice scramble to the summit. We also saw one snow white mountain goat run past us as we crossed a snow field. He was too quick for us to snap a photo but it was good to see.

We came directly down the glacier and jumped a few small cracks on the way. The glacier is in good shape and only shows a few bare spots with nothing to worry about. Below are stats from the entire trip (including the logging roads at the beginning and end).

For proper time comparison, the stats below start at the upper trailhead for brandywine meadows (past the snowmobile cabin) that is considered 4wd only. We drove as far as we could on the logging road and parked when it got too rough. From here it was only 2k further to the trailhead. We stopped our time at the Cypress Trailhead at the 4wd parking lot. The below times also include scrambling to the peaks of Brandywine and Cypress. Between the peaks, we took the line of least resistance and generally followed the West side of the ridge.

Below is what I carried for the day. It was slightly heavier than most runs carrying crampons and ski poles. Based on the trip that Stano and I did a few weeks ago, I expected to encounter lots of snow, and some of it very steep so I chose to carry poles and crampons. In hindsight, a lot of snow had melted and we could easily have done the run without poles (Nick did) and probably without crampons. We only put them on once to take the direct route straight down the glacier off Cypress but could have easily detoured to a less steep section.