Typically communication is an important part of the team event in skimo racing. Racing the Puchar Pilska Teams race in Poland over the weekend, the only common language between my partner and I was ‘go’ and ‘dobre’ (‘good’ in Slovak). Luckily these were really all that was necessary. 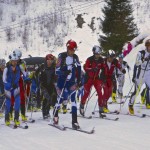 We actually raced twice over the weekend. First the ISMF Series/Slovak Cup Malino Brdo Skialp Night Challenge. About an hour and a half from where we are staying in Poprad, the Malino Brdo ski area is actually quite small but they manage to put on an excellent event. Starting at 5pm, just before dark, we completed two laps of a course that featured an ascent half on the groomed runs and half up technical switchbacks. The descents were entirely on groomers and required serious bravery to straight line down by headlamp. 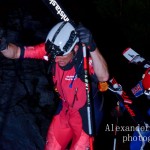 This is a cool photo. We were neck and neck for the entire race. (Photo from Malino Brdo FB Page)

The race started quickly and I settled in with a Slovak racer who led us up the first climb. At the top, we transitioned together and I followed him down the descent and through the forrest for the bootpack on the second climb. We started the second lap together and I pulled ahead and opened up a gap at the top of the third climb. We skied down to the bootpack section and I opened the gap further by the top of the fourth climb. With just a groomer descent left, I had a good transition and took off skiing. Halfway down to the finish line, he cruised past me going full speed. I wasn’t brave enough to go all out with my dimming headlamp over the icy bumps. I finished a close second and was quickly shepherded over to a series of reporters who were exceptionally curious why an American in a Team USA suit was racing their event! Everyone enjoyed my reply that ‘my girlfriend brought me here’! 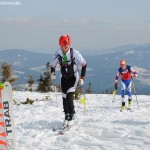 From Malino Brdo, we all piled into the car and drove North to Poland. Andrea’s cousin, Matus, organized a place for us to sleep but neglected to mention until the morning of that we would have to skin up 600m to the hut that we would be staying in. No problem though, we repacked our bags under the lights of the Tesco parking lot and started skinning up, arriving to our nice warm beds in the hut around 1:30am.

Luckily the next day, the race – Puchar Pilska – didn’t start until 10am. We slept in and when we woke at 9am, we all started asking who carried up the nutella. We had two loaves of bread for our group with the plan of eating a whole jar of nutella but realized that everyone assumed someone else had packed it! A bit of a bummer to start the day but we made do with bread and I was well stocked with Hammer Bars. 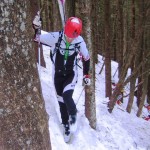 Matus also kindly found me a partner, Lucas, who had raced Malino Brdo the night before as well (and placed third). Andrea translated our race plan: we would ski fast and try to win. Since he raced here before, he would lead us on the descents. I wasn’t sure what to expect from the race but knew we had five descents and five ascents and off we went.

With a pre-race briefing in polish, I couldn’t help but laughing at myself for complaining about the World Cup briefings in French and broken English – what a luxury! Two Polish teams took off strong from the start and led us up the first climb. We moved into second place on the first descent as Lucas descended like a madman. The descents were unlike any in N. America. Steep, tight trees with drops and dips to negotiate. Lots of falls. On the second descent, we passed the other Polish team and moved into the lead before the bootpack. We hit a low angle striding section and pushed hard. A poor transition set us back a bit and one of the teams caught us on descent two. We had a good transition and moved out on climb three strong in second. 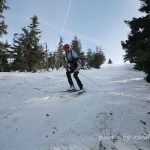 This is where the race kind of fell apart for us. I was slipping a bit and thought my skins were icing up but when Lucas called out my name and I looked down, I realized I had blown a skin and it was about to fail. I had to stop and switch to a new skin. I told Lucas to go ahead and stay with the group, that I would catch up, but by the time I climbed back up to Lucas, he had dropped off and we couldn’t close the gap to the leaders. We skied hard on the next few descents and climbs but couldn’t make up the lost time and cruised into the finish in third place. It would have been fun to fight it out with the leaders for first (they had a sprint finish) but we still had a great time. 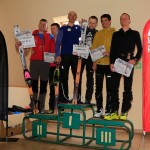 I’ve never had a skin fail in a race before and I realized afterwards how sloppy I had been. The climbs were entirely off piste with extremely tight, steep switchbacks (there wore probably more kick-turns in this race than ever race I’ve done combined this season). This is hard on skins and can contribute to failures. I was also in a rush at the bottom of climb three to transition and didn’t wipe the snow off my skis or apply the skins carefully. I was asking for a failure and had I taken five extra seconds to deal with skins at the transition, I would have saved more than a minute in lost time on the climb (slipping, skiing slowly, and replacing the skin).

Now I am off for Italy to race the Marmotta Trophy World Cup! 10 hours from Poprad, Slovakia to Martello, Italy. 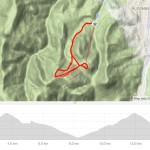 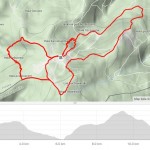 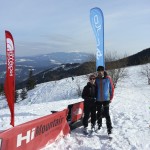 Andrea and I in Poland! (Martin’s Photo) 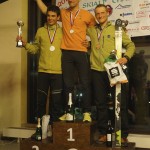 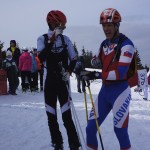 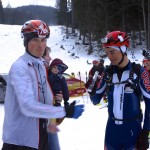 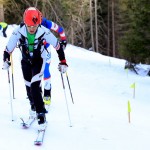 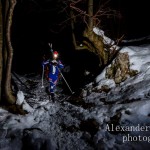 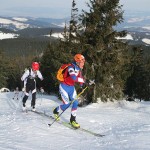 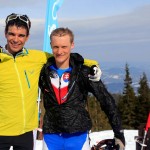 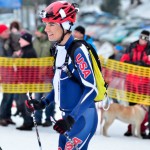