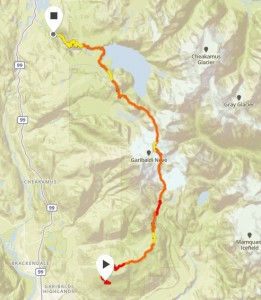 Map of our route over the Garibaldi Neve Traverse in September, 2018.

I’ve written several times about crossing the Garibaldi Neve Traverse. It’s a popular and spectacularly beautiful ski touring route in Garibaldi Park between Squamish and Whistler. I’ve done it quite a few times with a few variations and at varying speeds but I’ve always wondered about doing it in summer, on foot.

At the end of September of 2018, I was wrapping up a week in my lab at UBC doing ELISA assays and was itching to get out in the mountains with one day of good weather forecast before rain set in for the fall monsoon. Brendan and Kris were both on board for an adventure (well, Kris wanted to go for a bike ride but didn’t take much convincing) and I suggested a summer traverse of the Neve. I figured the crux would be crossing the crevasse fields on the high point of the Neve where you transition from the Bishop to the Upper Pitt Glaciers. 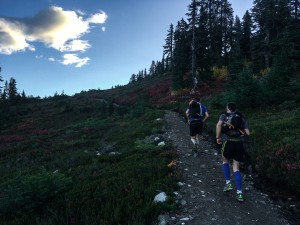 Starting out on the Elfin Lakes Trail is VERY civilized and a nice way to start the day with spectacular views.

We dropped one car at the 7-11 in Squamish and drove the other one up to Red Heather Parking Lot in time to start running by 7:00am. We only passed a couple of mountain bikers pushing their way up the trail. The views get amazing as soon as you get above treeline with an epic fall sunrise over the Garibaldi Massif and the Tantalus Range. We cruised past the Elfin Shelter which was just showing signs of life and headed down the trail towards Opal Cone, where none of us had been previously in summer.

We had our first bear encounter of the day, that proved to be uneventful as he was very focused on grazing for blueberries, and then a minor detour when we took a wrong turn trying to get down to Ring Creek (all those stones piled across the path mean a turn) but made good time on a really nice trail to Ring Creek. Here we turned off the main path and headed up towards the Garibaldi Glacier which is marked on the map but does not seem to exist any longer. We jumped off the moraine onto the dry Bishop Glacier and started jogging across the expansive flats below the East Face of Garibaldi. 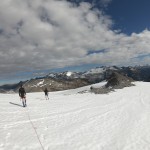 When we hit the “wet” elevations of the glacier we had to do a bit of wandering around a moraine gully to find the right way but eventually put on crampons to climb a slope and then quickly the rope as we found some thinly bridged crevasses. We crested the high point and found a large crevasse exactly where we expected some difficulties. A quick belay across a bridge got us onto the Pitt Glacier and then a lot of zig-zagging around slots towards the Sharkfin. I put one leg through a bridge into a bottomless crevasse but that was the extent of the excitement.

From the Sharkfin, we put away the rope and crampons and ran down to the dry Sentinel Glacier and up to Sentinel Pass. After descending briefly, we detoured off the winter route, left, towards Table Mountain and over Table Shoulder. I think this route isn’t often completed in summer because of the worry of bad bushwhacking around Garibaldi Lake. The key is to NOT try to follow the edge of the lake (that would be horrible bush), but instead cross over the high shoulder of Table Mountain, into Table Meadows, then follow a drainage that leads into a narrow valley (we saw a bear here too and TONS of scat), then up a burned ridge to the Clinker-Price Col. There was at most 30 meters of bush travel, otherwise open slopes. Almost entirely pain free. 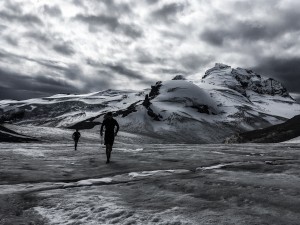 Brendan and Kris jogging on the dry Sentinel Glacier with the N Face of Nch’Kay and Dalton Dome in the background.

From the C-P Col, you rejoin an existing trail taking you to the day shelters at Garibaldi Lake. The trail seems to go on for a rather long time and turns into a bit of a slog but soon enough you emerge from an entire day of alpine solitude to the mental masses of tourists at the lake. We were quick to start running down the trail, eager to get the last 8k done with.

Our strategy was to harass tourists into giving us a ride back to the 7-11 in Squamish and it worked like a charm. The second pair of hikers returning to the trailhead, 5 minutes after we arrived, confirmed that they were driving towards Squamish, had 3 seats, and would give us a ride. The only hiccup was the immediate realization of just how bad 8hrs of running makes three guys crammed in the back of a small car smells. Apologies to the ladies who owned the car…

I’d highly recommend the route, as it’s incredibly good travel with trail or easy off-trail almost the entire way while still demanding some route finding and glacier technical skills. The glacier travel this time of year was definitely not trivial but the crumbly volcanic nature of the rock made getting on and off the glacier quite easy (no moats). Early to mid-July would likely be much easier crevasse-wise. With a skiff of new snow on the upper glacier, we were very happy to have a rope with us but it’s entirely possible that a week earlier we wouldn’t have used it. Otherwise, running shoes, light crampons, and running poles were the key to moving quickly and comfortably.

Check out my Strava track for details on connecting the Sentinel Glacier with the Clinker-Price Trail. More annotated pics below for help navigating from Sentinel Glacier to the C-P Col.
https://www.strava.com/activities/1874101030 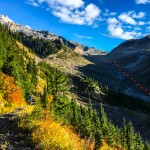 After passing Elfin Hut, dropping below the Gargoyles is a nice trail to Ring Creek. We turned off the Opal Cone Trail and continued up towards the Bishop Glacier. 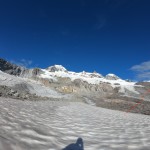 Our route crossed the flats of the Bishop Glacier and gained the high point of the neve on the far right side at a rock outcrop. 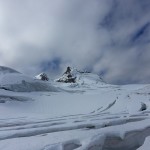 From the Pitt Glacier, looking back up towards nice ski lines on Nch’Kay. 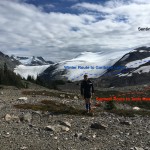 Kris hiking away from the Sentinel Glacier. The rocky moraines we took to this point are visible here. Same spot as the next pic of Brendan and Table Mtn. 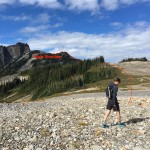 Brendan heading towards Table Mountain. The key here is to head through this break in the trees and then follow exactly the crest where the trees give way to a scree slope. Follow the edge of the scree slope for the easiest travel on a well used goat path. Pic taken in the same place as previous of Kris and Sentinel Glacier. 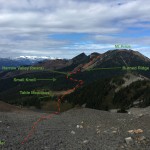 From high on Table Shoulder, descend a steep loose scree slope to Table meadows. Cross to it’s far side and then contour left around a small knoll along a drainage. Watch for an opening right that takes a few meters of bush and pops you into a narrow valley and gives way to the burned ridge up Mt. Price. 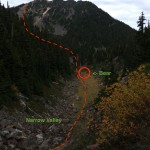 Looking up the narrow valley waiting for a bear to clear out with the burned ridge on Price. We took the left of the two ridges to get to the C-P Col more directly.